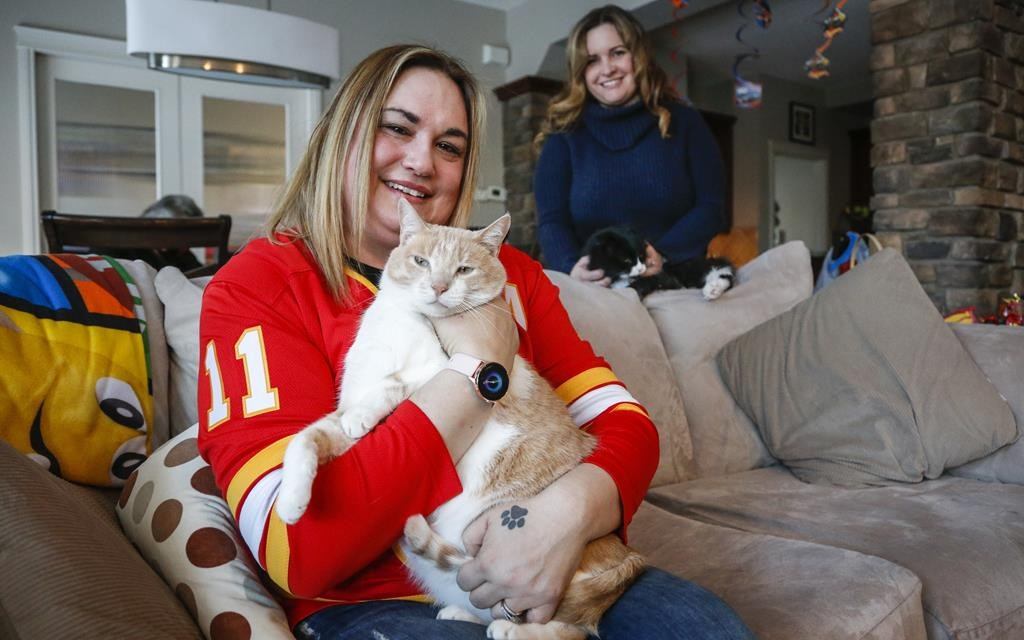 Melissa David, left, founder of Parachutes for Pets, which provides subsidized pet care, to pet owners in need, and Kelly MacQuarrie, pose for a photo with cats Ed and Jack in Calgary on Feb. 9, 2021. File photo by The Canadian Press/Jeff McIntosh
Previous story

A mother whose family has been struggling financially and emotionally is giving thanks to a pet charity that helped pay for medical treatment for their injured cat during a particularly dark time.

"It's been insane. It's been a really rotten year," Miller said in an interview with The Canadian Press.

Her 14-year-old son, Josh, has an anxiety disorder and has been taking his brother's illness particularly hard. Miller said Josh turned to his feline friend, Nala, for emotional support but she needed expensive surgery to repair a broken hip joint.

"Nala has been his absolute comfort. When he's feeling anxious, he pets her, he sleeps with her. Even right now she's confined to a tunnel in our living room and he's sleeping in our living room because he can't sleep without Nala."

Miller and her husband both lost their jobs due to COVID-19. She said help from friends and a GoFundMe campaign wasn't enough to pay the vet bill.

"When she called me ... I would call her just broken down," said Melissa David, founder of Parachutes for Pets, which provides subsidized pet care, including food hampers and medical treatment, to pet owners in need.

David said Miller was worried about what would happen to her son if the family lost the cat. "It was his mental health at that point," David said.

Miller said it looked like Nala was going to have to be euthanized.

"We thought we were going to have to put her down for a good three days and all (Josh) did was cry. He was devastated. It was not a good time," she said.

"Now he's thrilled. Just overjoyed. For a teenage boy to be overjoyed means something."

A mother whose family has been struggling financially and emotionally is giving thanks to a pet charity that helped pay for medical treatment for their injured cat during a particularly dark time. #COVID19 #Pets

David started out providing 25 to 30 hampers a month last year. In December, after she revealed she was receiving letters from children asking that Santa help their pets instead of bring Christmas gifts, the demand exploded to more than 600 hampers monthly.

After 4,000 responses in a three-day period, including from 35 social workers across Canada, it became obvious more had to be done.

"There are currently no programs in Canada that are helping children keep their pets when they are removed from their home. I was contacted by many children's agencies," David said.

"It became apparent we needed to dedicate a program solely to helping children keep their pets."

The first step, said David, is in April with the help of Calgary Flames centre Mikael Backlund. The NHL player lost his dog, Lily, earlier this year and the Lily's Legacy campaign will urge the public to buy Easter hampers for kids and pets in need.

"It's solely to help children that are going to be separated from their pets. We're going to commit to helping this child and this pet — whether it's leashes, collars, vet care, vaccines, licensing ... until they can go on their own."

Backlund, who in the past has donated hockey tickets to the charity, said losing Lily was hard on him and his wife and he was happy to help out.

"We thought it would be a great idea to do something good in our little princess's name," he said. "It's a great way to start it with Easter baskets ... and helping these kids keep their pets and hopefully raise some money so we can keep this program rolling."

Volunteer Kelly MacQuarrie has been delivering the charity's pet hampers with the help of her six-year-old son, Camden.

"He loves, loves animals. He thinks it's sad that maybe some kids can't afford to keep their pets," she said.

Camden, who said he prefers ginger kitties, understands why hampers are being delivered for pets.

"Because they need the food or they might die. It's good to help their pets."

David said she's hopeful the charity can be expanded across the country over the next three years to keep children and pets together.

"It's heartbreaking to think there have been so many kids that have experienced this with no help."

Why your cat likes to kill stuff

By Damian Carrington | News | February 16th 2021
State Of The Animal

Now experts say you can give COVID-19 to pets