By Christopher Reynolds | News, Politics | February 25th 2021
#1235 of 1359 articles from the Special Report: Coronavirus in Canada 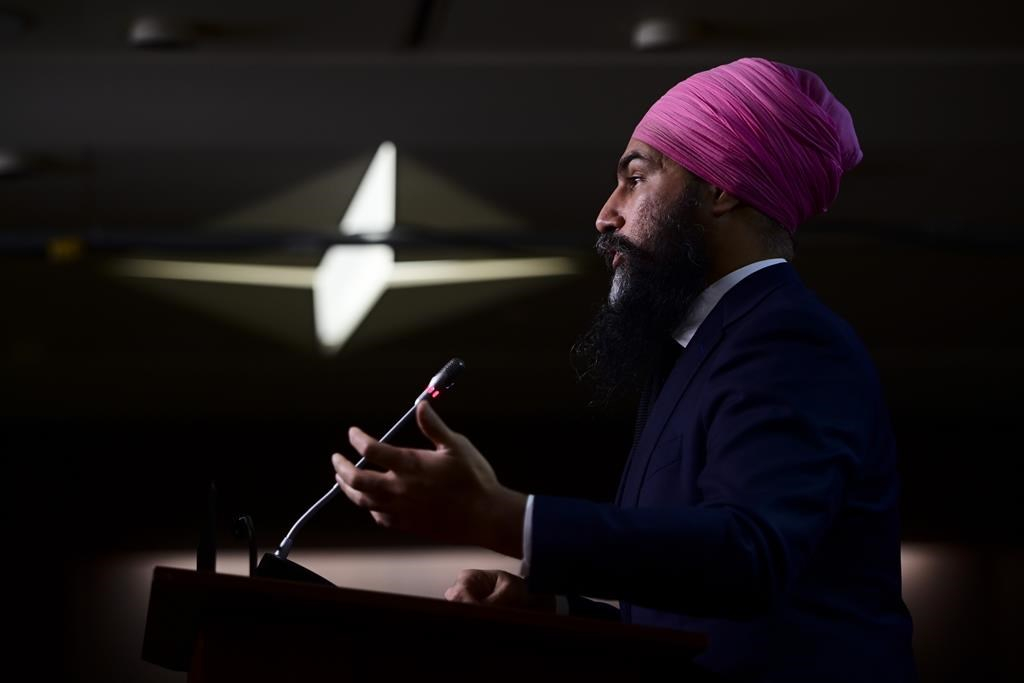 New Democrat Leader Jagmeet Singh says he will not trigger an election as long as the COVID-19 pandemic persists, relieving some pressure on Liberals concerned about cooking up a budget palatable to the NDP.

Singh said Wednesday he will stand by his pledge to prop up the Liberal minority government on confidence votes, even though Liberals refused to back an NDP private member's bill to enshrine a universal pharmacare program in legislation.

The bill was defeated by a vote of 295-32 at second reading in the House of Commons, with the Liberals, Conservatives and Bloc Québécois voting against it.

The federal government is expected within the next couple of months to table a budget, which would trigger an election if related legislation failed to garner support from at least one major opposition party.

"We do not think it's the right thing to do to go to an election while we should be fighting the pandemic. We are not going to trigger an election. So that means any confidence vote," Singh told reporters at a press conference Wednesday.

"We will vote to keep the government going."

All parties say they seek to avoid an election while the virus cuts a swath across the country. At the same time, all parties are gearing up for a possible campaign as they vet candidates and rev up fundraising efforts.

New Democrats had been hyping their proposed legislation on pharmacare — a key plank of any NDP campaign platform — in advance of Wednesday's vote. Private member's bills, especially those introduced by opposition parties, rarely succeed.

The NDP and Liberals both promised some kind of pharmacare program during the 2019 federal election campaign, but differ on the details.

"This is exactly what their own commission report recommends," Singh noted.

New Democrat Leader Jagmeet Singh says he will not trigger an #election as long as the COVID-19 pandemic persists. #NDP. #CDNPoli

The framework's scaffolding was hammered out before the pandemic, but he said COVID-19 has exposed Canada's dependence on big pharmaceutical companies in a way that renders action more urgent.

The proposed $15-billion-per-year program was to be modelled after the Canada Health Act, which is the legislative framework underpinning universal health care. Wednesday's vote happened to come on the 35th anniversary of the death of former federal NDP leader and Saskatechewan premier Tommy Douglas, widely known as the father of state-run health care in Canada.

More than 700,000 Canadians have no prescription drug coverage, while another 3.7 million have coverage but cannot afford to pay for their prescriptions, according to a parliamentary budget office report in 2017.

Prime Minister Justin Trudeau said his government is "committed to national universal pharmacare" and has worked to lower prescription drug prices. But he stressed discussions with the provinces to achieve medication for all rather than supporting a "unilaterally imposed" plan.

"No Canadian should have to choose between paying for their medication or putting food on their table," Trudeau said during question period.

"We know there is more to do but, unlike the NDP, we will not be imposing on provincial jurisdictions rules that are not worked out with them."

Singh's vow to back the government almost unconditionally puts the ball in the prime minister's court.

“In a sense it forces Trudeau’s hand — that if he really wants an election now, he will have to trigger it himself. But of course, if Trudeau doesn’t want an election, then he doesn’t need to bargain really hard to survive," said Karl Bélanger, president of consulting firm Traxxion Strategies and former senior adviser to the NDP.

"In the end what Jagmeet Singh is doing is really to keep Justin Trudeau in charge of his destiny when it comes to the election timing."

A bumpy COVID-19 vaccine rollout, ongoing devastation to industries such as travel and retail, and the complications attending an election amid strict lockdown rules are all reasons to think twice about sending Canadians to the polls.

“It would be a gamble for sure," Bélanger said of a potential spring election.

"As a prime minister, you should always think twice before gambling the power that you currently have, because you may end up losing everything."