B.C. teachers union argues students of all ages should mask 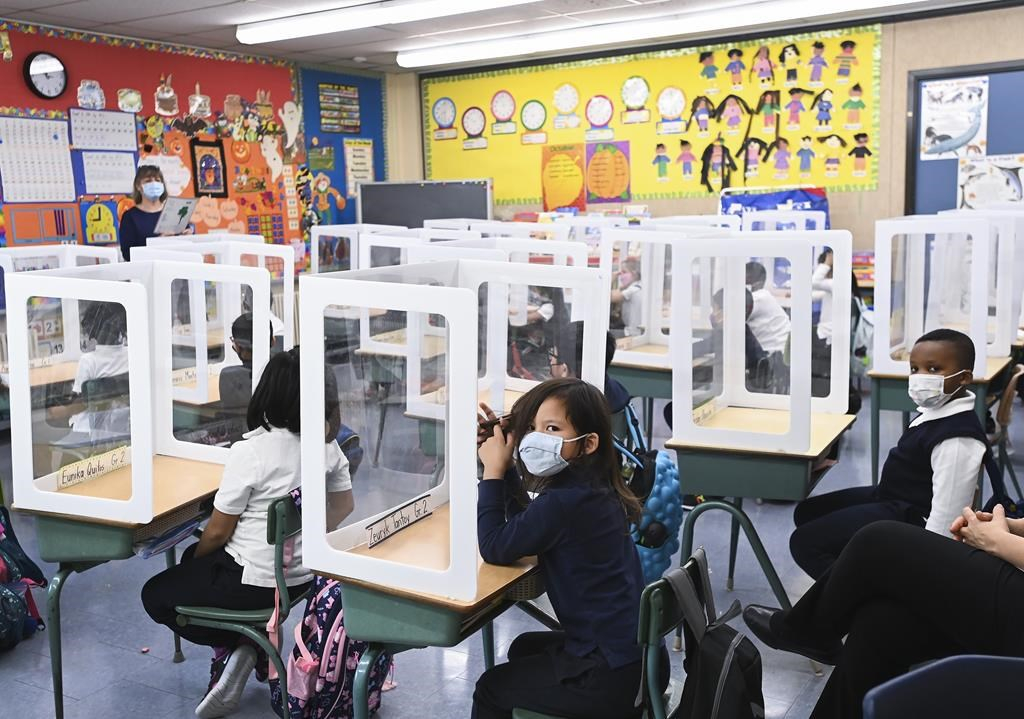 Children wearing masks sit behind screened in cubicles as they learn in their classroom at St. Barnabas Catholic School during the COVID-19 pandemic in Scarborough, Ont., on Oct. 27, 2020. File photo by The Canadian Press/Nathan Denette
Previous story
Next story

As British Columbia teachers argue for broader mask requirements in elementary schools, some families and educators say it's been easy for kids to adapt to the rules in other provinces.

Heather Thompson, a special-education teacher at Whitehorn Public School in Mississauga, Ont., said masks were introduced to students from grades 1 through 12 in September in Peel's school district.

"Kids are easier than adults, frankly," said Thompson, who works with Grade 4 and 5 students.

"I find once they’re told a rule, they’re pretty compliant. We don't often give kids credit where credit is due."

While elementary teachers are required to wear masks in common indoor areas, it remains a personal choice for elementary students and their families.

Provincial health officer Dr. Bonnie Henry has said young children don't get as sick with COVID-19 and don't pass it on as well as others. Data from around the world support the importance of other safety measures, but masks are more complicated for kids, she said.

"Masks can be counterproductive, particularly for young people who have challenges with keeping it on all the time or not fiddling with it and it can cause more challenges in a class setting," Henry said.

Demands from teachers for increased safety measures like stronger mask rules have grown louder since variants of the COVID-19 virus were identified at several schools on the Lower Mainland.

On Tuesday, teachers marched outside an elementary school in Surrey, B.C., where a confirmed case of a COVID-19 variant had been reported.

Matt Westphal, the president of the Surrey Teachers Association, said teachers are concerned that there is just a single set of health and safety rules for every school in the province, regardless of how severe the pandemic is in each community.

“We think that school districts should be permitted to establish more strict rules, if they think they need to,” Westphal said, adding Surrey has far more cases than some other jurisdictions.

In Ontario, teachers and students in grades 1 to 12 are required to wear non-medical face masks inside and when physical distancing isn't possible outdoors.

In Quebec, mask rules depend on whether a school is located in high-risk areas. In "red zones" like Montreal, all students must wear masks in common areas, while those in Grade 5 and up must also wear them in classrooms.

The in-class rule will be expanded to all elementary students in red zones March 8.

Felix Joubarne, 9, said he understands why he has to wear a mask on the bus and in corridors. He goes to Ecole du Grand-Boise in Chelsea, Que., which was in a "red zone" for several months before recently transitioning to an "orange zone" with fewer restrictions.

"When they first started, it was kind of hard and you always forgot your mask, but you get used to it," he said.

He doesn't believe it's changed the way he interacts with his friends.

His father, Simon Joubarne, said he supports mask policy in schools if it reduces the risk of transmission.

Jenny Gignoux has two children at the same school who are 11 and eight.

"At the beginning, I would say I was a bit worried when they told us that my daughter had to wear a mask," she said.

Masks are uncomfortable, she thought, and she wondered if it would be difficult to communicate or for her daughter, Lyra, to understand her teacher.

But Lyra never mentioned masks after the policy kicked in, only saying that she got used to it after Gignoux asked her.

"I think they are more adaptable than we are, they got used to it very quickly and that's it," she said.

Gignoux thought it might be more difficult for her son Soren, who is eight, but he has generally adapted to wearing masks in public places like stores or on ski hills with a few reminders, she said.

BC Teachers' Federation president Teri Mooring said teachers are frustrated that they haven't received a straight answer on the rationale behind why masks aren't required for elementary students.

If kids fiddle too much, she questioned how young children in other jurisdictions seem to have successfully learned to wear masks.

"This reason is dismissive and unsatisfactory."

Mooring said she has heard no evidence that wearing masks would harm children. But a recent survey showed teachers are experiencing high levels of stress due to a lack of confidence in the health and safety measures, Mooring said.

"Their stress levels are directly connected to the health and safety measures," she said.

Communication about exactly what's allowed and who has the power to enforce rules has been another "huge issue," Mooring said.

Three principals who recently tried to impose stricter mask rules independently were thwarted by their school districts, she said.

The Education Ministry said in a statement that neither schools, school boards nor the ministry itself has the authority to set public health policy in a pandemic.

The ministry sets guidelines based on those experts' guidance, it said.

However, on Tuesday, Henry said there is "absolute flexibility" in adapting and adjusting safety plans for schools depending on their local situation. Schools work with their local health officers to address challenges unique to them, she said.

"It is important for teachers to encourage mask use where it is appropriate in classrooms.''