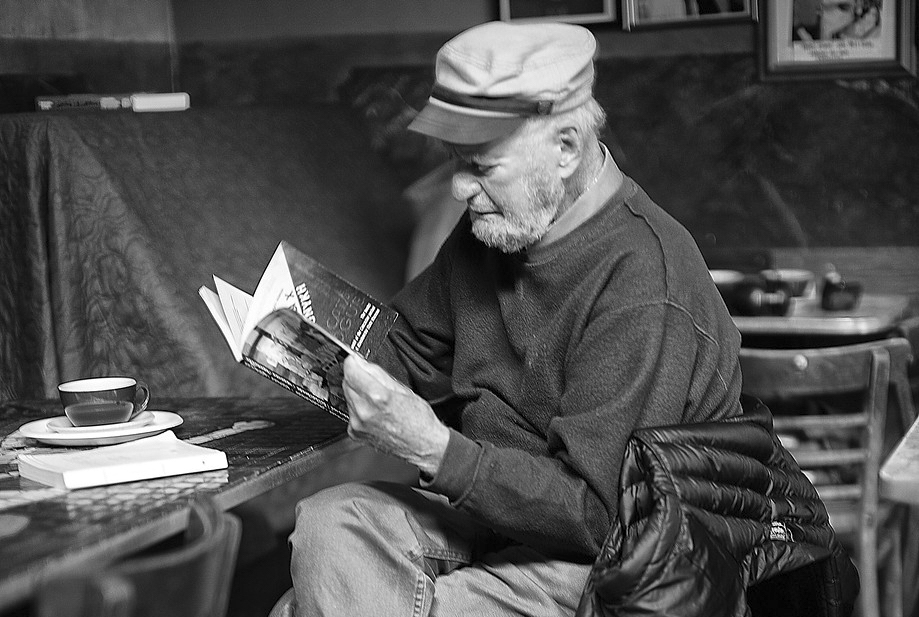 On Monday, Feb. 22, American poet, publisher and innovative bookseller Lawrence Ferlinghetti died from lung disease at the age of 101.

In the summer of 1977, Ferlinghetti joined the crew of the Greenpeace ship during the whale campaign, and he wrote a historic poem in the ship's dreambook.

Ferlinghetti was born in New York in 1919, earned a B.A. in journalism at the University of North Carolina at Chapel Hill, completed a doctoral degree from the Sorbonne in Paris and published his first short stories in Carolina Magazine. He moved to San Francisco in 1951, and founded the first all-paperback bookstore in the U.S. — the now-famous City Lights Books — to "democratize" modern literature by making new and innovative writers widely available.

In 1957, U.S. agents arrested Ferlinghetti on obscenity charges for publishing Ginsberg's Howl. After a historic freedom of speech trial, the court acquitted Ferlinghetti, who became an international cultural hero. His City Lights bookstore became a hub for progressive politics and revolutionary writers.

Ferlinghetti's own first collection of poems, A Coney Island of the Mind, written in 1958 for jazz accompaniment, became his most iconic work. Nevertheless, "the greatest poem," Ferlinghetti later wrote, "is lyric life itself."

In September 1977, the Greenpeace ship James Bay, a Canadian minesweeper rechristened Greenpeace VII, had just confronted the Russian whaling fleet off the coast of California, when the crew arrived in San Francisco with photographs and film.

Ferlinghetti visited the ship at Pier 32 in San Francisco harbour. After a tour of the ship and a talk with several of the crew members, I invited the elder poet to join the crew, an invitation I knew I would have to clear with our skipper, George Korotva. Ferlinghetti eagerly accepted, and Korotva agreed. The poet and publisher had business to attend to, so we departed, and he caught up with us in Seattle a week later, in early October.

Back at sea, we searched for the Russian whaling fleets, but they appeared to have retreated from the eastern Pacific. Over a coffee in the ship's galley, Ferlinghetti told me the ship reminded him of his service in the U.S. navy during World War II. He recalled his experience as skipper of a submarine chaser — similar to the minesweeper James Bay — during the Normandy invasion. He told me he had arrived in Nagasaki with the U.S. navy just weeks after the bomb had been dropped and that the experience had turned him into a lifelong pacifist. Ferlinghetti thumbed through a large black notebook that sat on the galley table, filled with entries from the crew.

He asked me about it, and I explained that two years earlier, during the first whale campaign, musician Mel Gregory had brought a notebook on board, labelled it "Greenpeace Dreambook" and left it on the galley table for crew members to enter their dreams. This was Volume 2. The poet smiled and settled back to read the entries.

On the morning of Oct. 14, off Cape Flattery at the entrance to Juan de Fuca Strait outside Vancouver, Ferlinghetti sat down at the galley table, opened the Dreambook and wrote down his recollections from the night before:

Lawrence Ferlinghetti wrote his dark dreams not to lead us to despair but, rather, to action, writes @rex_weyler.

Dreamt of
Moby Dick the Great White Whale
Cruising about
with a flag flying
with an inscription on it
"I am what is left of Wild Nature"
and Ahab pursuing in a jet boat with a ray gun
and jet harpoons and super depth charges
and napalm flamethrowers and electric
underwater vibrators and the whole gory
glorious efficient military-political
industrial-scientific technology
of the greatest
civilization the
earth has ever
known
devoted to
the absolute extinction and
death of the natural world as we know it
And Captain Ahab Captain Death Captain Anti-Poetry
Captain Dingbat No Face Captain Apocalypse
at the helm
of the Killer Ship of Death
And the blue-eyed whales
exhausted and running
but still
singing
to each other . . .

Ferlinghetti published this poem the following year, in Northwest Ecolog (City Lights, 1978). Thereafter, whenever I visited San Francisco, I looked him up. He was always gracious with his time, and we typically had tea in his City Lights Bookstore office. He gave me signed copies of his books and revised another poem from Northwest Ecolog, "Rough Song of Animals Dying," to publish in our newspaper, Greenpeace Chronicles, which we did in November 1978. This poem had also emerged from a dream:

In a dream within a dream I dreamt a dream
of creatures everywhere dying out
in shrinking rainforests
in piney woods & high sierras
on shrinking prairies & tumbleweed mesas
. . . a dream
of the earth heating up & drying out
in the famous Greenhouse Effect
under its canopy of carbon dioxide
breathed out by a billion
infernal combustion engines . . .

These visions appear familiar now, but in 1979 they felt shocking. Almost no one had yet heard of the greenhouse effect. This was 10 years before Bill McKibben's famous book on the subject of global warming, 35 years before Elizabeth Kolbert's Sixth Extinction.

Remembering Lawrence Ferlinghetti ignites in me a reminder that poets typically lead cultural change, serve as pioneering voices that might awaken an emerging zeitgeist, a new awareness arising in humanity. Ferlinghetti wrote his dark dreams not to lead us to despair but, rather, to action.

Rex Weyler is an ecologist and author of Greenpeace: The Inside Story, a finalist for the BC Book Award, and Blood of the Land, a history of Indigenous American nations.