Film reviews: A Golden Globes contender, Jodie Foster takes on Guantanamo and all about Pelé 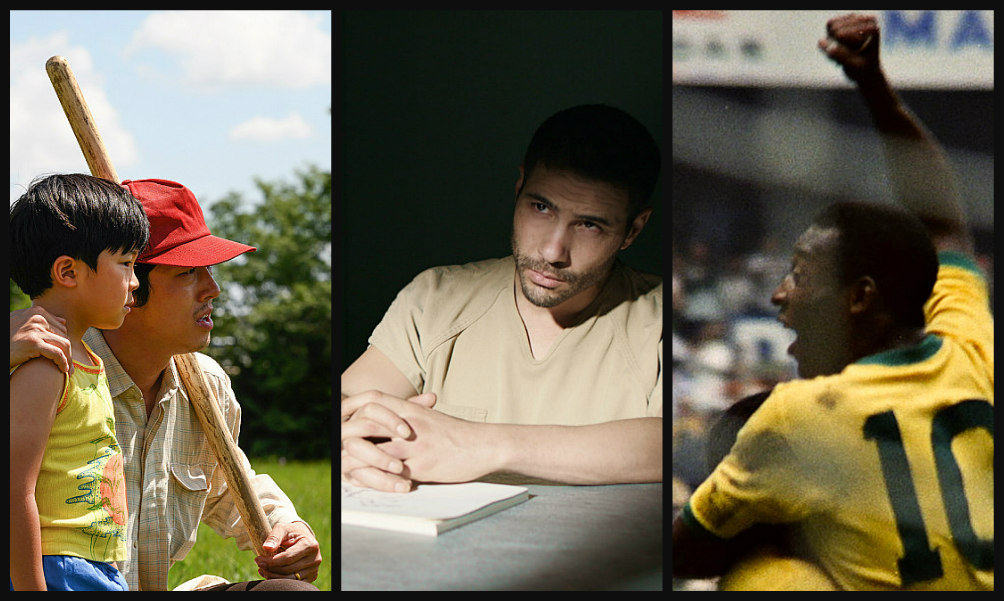 Also: A soft tale of the Uyghurs, farm wives in love and an inspirational teacher.
Previous story
Next story

The Golden Globes are awarded Sunday and let’s root for one film that I review today. It’s first on my list.

You might also take note that earlier this week, Disney+ added hundreds of films that are more mature than its usual fare. That comes with the new imprint, called Star, that’s added to the service. It’ll cost you $3 a month more and there are new parental controls you can program in.

And even more on the mature side, check out Farrow v. Allen, the short series that started on CRAVE this week. It’s a creepy recounting of the sexual abuse allegations that have been made against Woody Allen. The directors previously dealt with rape (in the military and on campuses). Mia Farrow and her daughter Dylan (plus other children) talk, Mia supplies home movies and photos, and Woody is heard through excerpts from a talking book. You might feel dirty afterwards, but careful, a second episode starts Sunday, and they are said to get more lurid.

This week, we have …

The World to Come: 3

MINARI: It’s a plant, a sort of Asian celery or parsley, and highly symbolic in this lovely film. First, to help describe a Korean family’s immigrant experience. Later to offer a rescue when calamity sets in, as it often does in films like this. It’s there in the background while up front, a warm-hearted and gentle story plays out. Steven Yeun plays a father who has moved his family (wife, two children and later their granny) from California, where success eluded him, to Arkansas where he hopes to farm the 50 acres he bought.

Getting started is tough. Like many immigrants, both parents take a menial job (sexing baby chickens) to pay the bills. Granny watches the kids for them, including the bratty son, played by Alan Kim. He is a stand-in for writer-director Lee Isaac Chung, who has worked in events he lived through. There’s the farmhand that Will Patton plays, who quotes Scripture and drags a cross on the road. There’s a schoolboy with a curious question. But not the usual elements, like racism, that you might expect. The film creates its ambience out of real issues, like finding water or the wife and husband arguing. Even the big setback isn’t what you thought was coming. The film is surprising, charming, often funny and always endearing. It has been honoured by many critics groups, including Vancouver’s, and is nominated at the Golden Globes. (Available on all digital and on-demand platforms.) 4 out of 5

A FIRST FAREWELL: Here’s another charming and gentle film, but from a place you might not believe. The Xinjiang region in China, where the Uyghurs live. And are oppressed, or according to the Commons vote in Ottawa this week, subjected to genocide. There’s no mention of accusations like that, or even of the orders that schools must teach love for the Communist Party. The only threat to the culture of these people that the film alludes to is language. Children have to learn Mandarin and in one scene, a mother is berated by a teacher because her daughter is not working hard at it. I guess that’s supposed to represent all the domination Beijing imposes and probably says more between the lines to the people there. That’s one way to get the film past the censors.

Politics aside, this is a beautiful film designed by writer-director Wang Lina to show off the land she grew up in. It shows the people, their quiet small-town life and the anxiety growing around them because of modernization. Young people want to go to the cities. The old people want them to stay. Saying goodbye to the old ways may be coming on. A seven-year-old boy feels those pressures around him. He takes care of his sickly, deaf and mute mother, but manages to lose her for a time while he’s with a girl from the neighbourhood. She’s the one failing Chinese language and her mother wants to move to a town with a better school. As that’s debated, a key line is said: “The government is our father, too.” Another poke at the censors? Maybe. (Streaming from VIFF Connect.) 3 out of 5

THE MAURITANIAN: The U.S. under Joe Biden is again looking at closing the Guantanamo military prison, as Obama had planned. This film should be watched as part of the consideration, although reading the book it’s based on might do just as well. It’s by a man who was in there for over 14 years without ever being charged with anything. There were rumours that he was a recruiter for al-Qaeda (one of the 9/11 pilots, for instance) but no evidence. He could explain the visitor to his apartment when he lived in Germany but wasn’t listened to. Instead, he was subjected to advanced interrogation, like waterboarding, as authorized by Bush, and even after being cleared, was held for seven more years as the Obama administration appealed.

The film is directed by Kevin Macdonald, who has both factual documentaries and dramas (like The Last King of Scotland) in his credits. He does a straightforward job of rounding up the facts and involving us in both sides. There’s Jody Foster as the defence lawyer who takes the case, Shailene Woodley, as her assistant, and Benedict Cumberbatch (putting on an annoying American accent) as the prosecutor determined that the suspect (played by Tahar Rahim) never be free again. Job one is finding out what the charge is. No answer. How about the detailed documents on his interrogation? He confessed, but under what kind of duress? The film takes us step by step in the procedure and the wrangling with bureaucracy, and holds the graphic torture sequences until almost the end. It takes a while to engage you, and while factually interesting, doesn’t manage to become all that riveting. Angry-making? Sure. (Starts Tuesday in four theatres — Saskatchewan and east — and on digital and on-demand platforms across Canada.) 3½ out of 5

THE WORLD TO COME: Rural boredom leads two women to jump into each other’s arms. That, in brief, is what happens here, and in the short story it comes from. The film is heavy with yearning and warm glances, and light with what they lead to. So it’s a tastefully restrained lesbian romance played out by Katherine Waterston as Abigail, the staid farm woman, and Vanessa Kirby as the entrancing Tallie, who moves to a rented farm next door and walks over frequently to visit. It’s sometime in the 1850s in upstate New York.

There are frequent snow scenes, blizzards even, to contrast with the heat developing indoors. “I never want to be far from you,” Abigail writes, and also “astonishment and joy,” which Tallie reads out loud. The film suggests much criticism of their two husbands (Casey Affleck and Christopher Abbott) for being distracted by work and not paying enough attention to the wives. It’s a recurring story in the movies these days, and this one is no better or worse than most. The actors are good, especially Kirby; the scene-setting by director Mona Fastvold is good, but there’s too much voiceover to tell us what we already know and there are dates shown on screen to mark every event, some 20 or so of them. It feels mechanical. (Available on VOD and digital platforms.) 3 out of 5

PELÉ: The greatest soccer player ever? The Brazilian superstar can easily merit that title, and this energetic film shows exactly why. He’s even in it himself, sitting in a wheelchair, to recall the events that prove it. Four World Cups played; three won. Plenty of highlight clips of spectacular goals by him and just as showy set-ups to let others score. Tremendous confidence when he first joined his club team, distractions when celebrity intrudes, and even some self-doubt when he feared he couldn’t repeat his success at his final World Cup.

His trajectory is well-documented as the sport changed around him. The free-flowing style became defensive. He called it “ugly.” No wonder. Other teams keyed on him. Control him and you control his team. He’s injured in one sequence. There are clips from several legendary games with their excited announcers. Soccer fans will be delighted, though I’ve read a pedant or two complaining that there’s not enough. Maybe that was to leave room for politics. Pelé had no interest in it, but he seemed friendly with the dictator who took over in a military coup. It’s a well-rounded portrait, with hardly any faults mentioned but memories, laughs and praise from several of his old teammates. (Netflix.) 3½ out of 5

MY NAME IS PEDRO: This documentary about an inspirational teacher has been playing film festivals for over four years and finally now is available everywhere via Amazon, Apple TV and other VOD platforms. It’s worth your effort to search for it. The story seems local, based in the South Bronx area of New York, but has much that’s universal in it. Pedro Santana is shown as a man who could inspire students simply by relating to them. He could speak like them, listen to them and treat them like friends. And he was ever the optimist. “The best way to trigger learning is to have people enjoy learning” was his central message. Also: “Enthusiasm is the key.”

He got results. He climbed the education hierarchy as test scores and graduation rates rose. But he was fired on a technicality by the new members of the school board. There had been a long period of unease between him and the Hasidic members who had become the majority on the board. It wasn’t about race or anti-Semitism. They’re not even mentioned. It was about budget-cutting and redirecting resources. The film shows much of the dispute as it played out at public meetings, which are fascinating to watch. There are strong emotions from parents and a tragedy at the end. There’s strong, if unlikely, drama at this school board. (VOD.) 3 out of 5