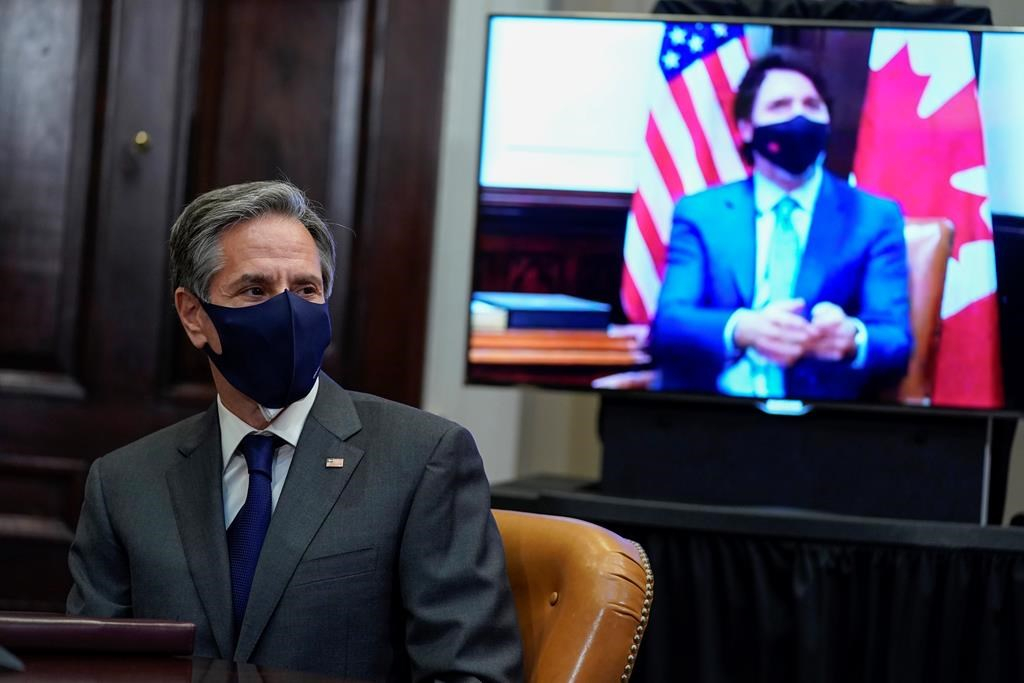 Antony Blinken listen as Justin Trudeau speaks during a virtual bilateral meeting with Joe Biden and Kamala Harris in the Roosevelt Room of the White House, on Feb. 23, 2021, in Washington. File photo by The Associated Press/Evan Vucci
Previous story
Next story

Neither Canada's prime minister nor the U.S. secretary of state were showing their diplomatic cards Friday as the two countries discussed the plight of two Canadians languishing behind bars in China.

The U.S. has a "significant role" to play in helping secure the release of Michael Spavor and Michael Kovrig, said Trudeau, although he refused to elaborate on the details.

"These are processes that are ongoing," the prime minister told a news conference earlier in the day.

"The United States is taking their role in this very seriously and we look forward to working with them on bringing the two Michaels home as soon as possible.”

Blinken, too, stayed in his diplomatic lane, expressing earnest American harmony with Canada and cheering a multilateral effort to denounce the practice of taking political prisoners.

"We stand in absolute solidarity with Canada in insisting on their immediate and unconditional release," Blinken said before lavishing praise on the new Declaration Against Arbitrary Detention.

The declaration, a project initiated by former foreign affairs minister François-Philippe Champagne, is from a coalition of more than 50 countries opposed to the state-sponsored political detention of foreign nationals.

Its purpose "is to bring countries together to stand against the arbitrary detention of individuals for political purposes, a practice that we see in a number of countries, including China," Blinken said.

Neither Canada's prime minister nor the U.S. secretary of state were showing their diplomatic cards on February 26, 2021, as the two countries discussed the plight of two Canadians languishing behind bars in China. #TwoMichaels #CanadaUS #CDNPoli

"I think and I hope that this can grow into something that establishes a new international norm against arbitrary detentions."

Spavor and Kovrig — the "two Michaels" — were swept up after the RCMP's arrest in December 2018 of Meng Wanzhou, the chief financial officer of Chinese tech giant Huawei.

Blinken demurred on the question of whether the U.S. is considering a so-called deferred prosecution agreement — a form of plea deal that could allow Meng to return to China in return for an admission of wrongdoing.

"There are legal questions that are appropriately the province of our Department of Justice," he said. "They follow the law, they follow the facts and I refer you to them for anything on the legal aspects of this."

Earlier this week, a Justice Department spokesman confirmed that prosecutors were continuing to seek Meng's extradition to the U.S., where she is facing fraud charges.

Friday's meetings, billed as a "virtual visit" — no jet lag, but no frequent-flyer miles either, Blinken joked — follow Trudeau's own virtual summit this week with President Joe Biden, which produced a "road map" for collaboration on issues like climate change, the economy and COVID-19.

"It's hard to think of two countries whose destinies are more connected, more intertwined than ours," Blinken told Garneau as their meeting got underway.

"We know that every single day, the work that we're doing, and more importantly the deep ties between our people — in virtually every aspect of our societies — are benefiting both countries."

Garneau returned the compliment, adding that Canada can be more to the U.S. than just a friendly ally.

"I want you to know that you can count on Canada to be by your side," he said. "And I think that you'll find that we can be surprisingly helpful to you, while advancing our own objectives."

That could easily be seen as an oblique reference to Buy American, Biden's suite of protectionist measures aimed at ensuring that U.S. contractors, suppliers and workers are the primary beneficiaries of American infrastructure projects and federal contract work.

Canadian businesses, employees and contractors depend on that work too, however, and the federal government is pressing hard to ensure that they don't get shut out of what will surely be a big-budget effort to resurrect the U.S. economy.

On that score, Blinken seemed to suggest that Garneau's message got through — particularly on the issue of fortifying North American supply chains.

"There's a lot of opportunity there between the United States and Canada that we intend to pursue," he said.

"My sense, from the conversations between the two governments, is that there is ample opportunity for us to work together and find ways to benefit each other."

Efforts to restore ties between the two countries after extensive fraying during the Trump era have been going on all week, albeit virtually.

And Transportation Secretary Pete Buttigieg and Transport Minister Omar Alghabra have committed to tougher vehicle pollution standards, and collaborating on new standards for aircraft and ships.