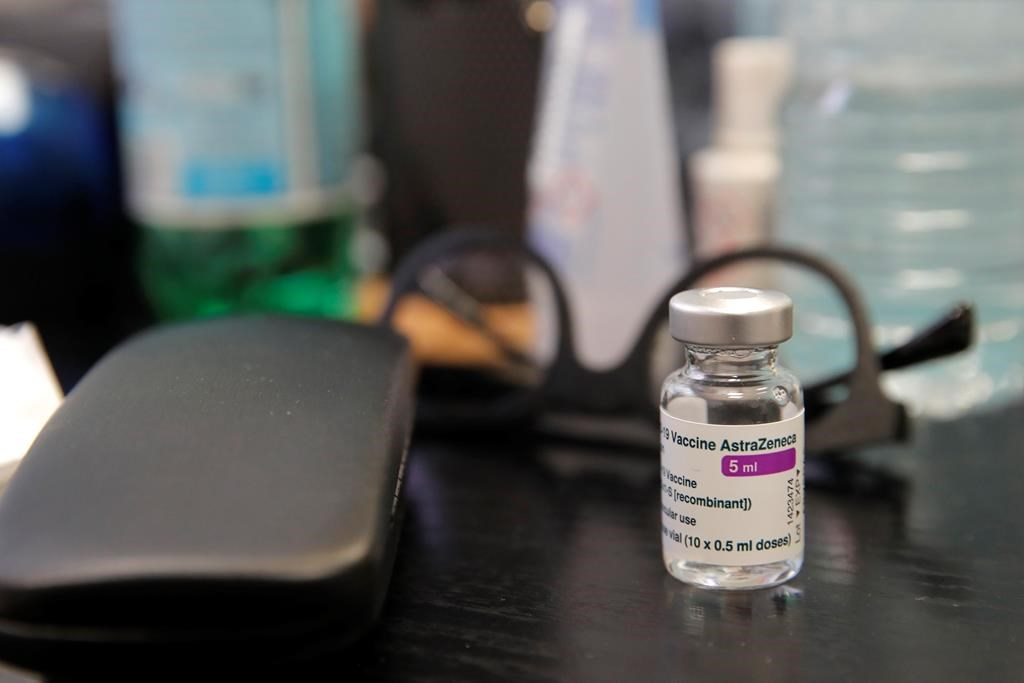 A vial of Oxford-AstraZeneca COVID-19 vaccine is pictured at a family doctor office, on Thursday, Feb. 25, 2021 in Paris. File photo by The Associated Press/Christophe Ena
Previous story
Next story

The first doses of the Oxford-AstraZeneca COVID-19 vaccine are set to arrive in Canada today as confusion persists over who should get it.

Canada is to receive 500,000 doses of the vaccine, the third approved for use in Canada, from the Serum Institute of India.

But questions about who should receive the Oxford-AstraZeneca vaccine continue amid conflicting guidance about its use.

Health Canada last week authorized its use for all adult Canadians but the National Advisory Committee on Immunization recommended Tuesday that it not be administered to people 65 years of age or older.

The committee says there is limited data from clinical trials about how effective the Oxford-AstraZeneca vaccine is for seniors and recommends that they be given priority for the two other vaccines — Pfizer-BioNTech and Moderna — already greenlighted for use in Canada.

Both Health Canada and the committee stress no safety concerns have arisen in the clinical studies or among the millions of seniors who have received the Oxford-AstraZeneca vaccine in other countries.

Indeed, Dr. Supriya Sharma, chief medical adviser at Health Canada, insists there's no real contradiction between what her department and the advisory committee are saying: both agree that where possible, it's preferable to give seniors the Pfizer or Moderna vaccines, which have proven in clinical trials to be more effective in guarding older people against COVID-19.

That said, Sharma says seniors shouldn't wait for a Pfizer or Moderna shot if they can get an AstraZeneca jab sooner.

Real-world evidence, she says, shows the AstraZeneca vaccine is effective at preventing serious cases of COVID-19, hospitalizations and deaths.

Some provinces, including Alberta, British Columbia and Prince Edward Island, plan to follow the advisory committee's advice and target the AstraZeneca vaccine at younger people working in front-line essential services or in high-risk settings like prisons.

Other provinces, including Quebec, New Brunswick and Nova Scotia, are still mulling over the issue.

The Oxford-AstraZeneca #COVID-19 vaccine is headed to Canada amid confusion over its use for seniors. #CDNPoli #AstraZeneca #Covid19vaccine

In addition to today's shipment of AstraZeneca doses, Canada is also scheduled to receive 444,600 doses of the Pfizer vaccine this week.

With AstraZeneca added to Canada's vaccine arsenal, the country is on track to receive a total of 6.5 million vaccine doses by the end of this month — half a million more than originally expected.

Prime Minister Justin Trudeau is expected to give an update on the vaccine rollout today at a news briefing.

He's also expected to announce significant new funding for academic research at dozens of universities across the country. The research to be funded won't necessarily be pandemic-related.

The funding comes on top of some $1 billion the Trudeau government has plowed into research since COVID-19 started sweeping the country a year ago, in a bid to keep researchers working throughout the pandemic on all manner of projects that the government hopes will eventually help the economy rebound.