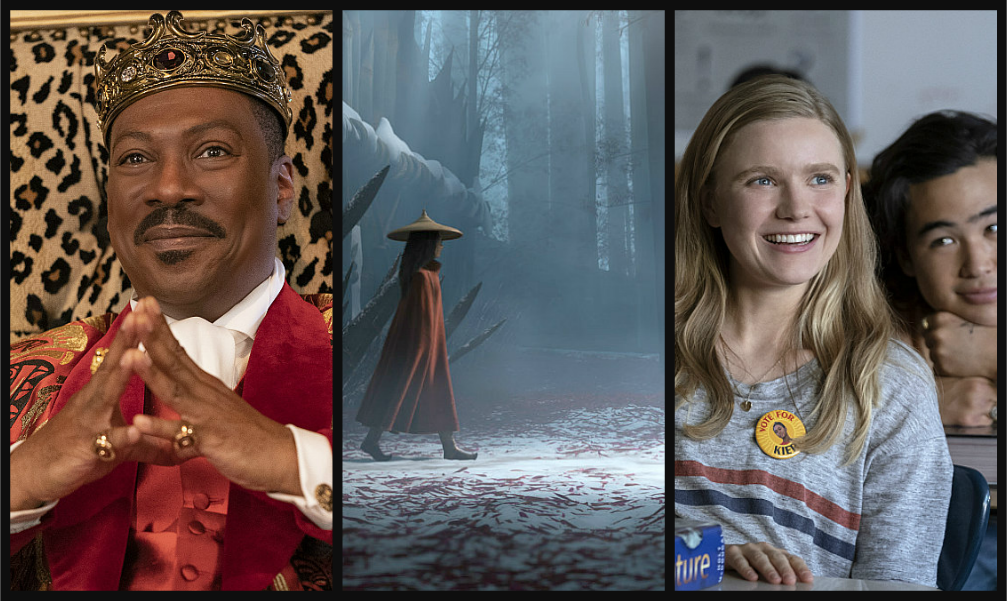 You’ve got a lot of choice this week. Besides what I review, three good ones I’ve rated before are now more widely available. My Salinger Year is on video on demand, Anne at 13,000 ft is streaming from The Cinematheque and Notturno is streaming from VIFF Connect. All worth your time. And also at VIFF, the Women in Film festival is now on. See the notes here.

And these are the new ones ...

Raya and the Last Dragon: 3

COMING 2 AMERICA: There’s an unusually restrained Eddie Murphy in this one. You can watch this film with the family. The language and the jokes are tame. The moral is politically correct. Not what you’d expect from him, especially since he’s working again with Craig Brewer, who directed him in Dolemite Is My Name. That one was raunchy and funnier than this. The main draw here is hope that it might be as cheeky and entertaining as the original, which came out 33 years ago. It almost is, in a much milder way, and relies on a lot of references back to it. And several actors reappear, including Arsenio Hall (who, like Murphy, plays multiple roles), James Earl Jones, John Amos, Shari Headley, and some surprise cameos.

The story is now the reverse. Most of it takes place in the African nation of Zamunde, not the U.S. Murphy, as Akeem, now becomes king, has no male heir and learns that he has a “bastard son” back in Queens, N.Y., from when he went there looking for a wife. (It’s complicated. Don’t ask.) He goes back, finds him (Jermaine Fowler) and brings him and his mother (Leslie Jones) back with him. He plans to have him marry the daughter of a warlord in a neighbouring country, but that doesn’t work out. And why can’t his daughter be next in line to his throne? Tradition and law, that’s why. That will be resolved, but first a lot of stereotypes are on display and showy celebrations are held. Gladys Knight, En Vogue and Salt-N-Pepa (yes, the real ones) take part, and Nigerian singer Davido and NBA veteran Dikembe Mutombo appear as themselves. Many Blacks in America have taken to celebrating their African heritage. And this film seems to have joined in. (Amazon Prime Video.) 3 out of 5

RAYA AND THE LAST DRAGON: The animation and the character-building is pure Disney quality, and that makes the extra price worth paying. But there’s a lot of exposition to get through early and a complex story even after that, possibly thanks to the extra-long list of writers, and that makes this one better for the older kids than the young ones. The message, though, is good for anyone: Unity and living in harmony require trust. It’s a useful idea, even if it feels tacked on to what is really a grand adventure and a quest.

Raya is a young warrior (voiced by Kelly Marie Tran) who has to find the one surviving dragon (voiced by Awkwafina) and with her, reunite the imaginary Southeast Asian kingdom called Kumandra. Other dragons had sacrificed themselves 500 years earlier when an evil force tore the land into five pieces. For some reason, it’s now back. Raya finds the dragon without a lot of trouble, but reunification is a bigger job. Together they have to get to each of the five lands and reclaim a gem that had also been broken into pieces. See? Complex. Friendship becomes key. Raya and the dragon, which can shape-shift into a human, talk like girlfriends about clothes, makeup and buying on credit. Meanwhile, Raya’s oldest friend (voiced by Gemma Chan) has become a surly and punky rival. They fight with swords, poles and kicks. Other characters, including a devious baby, get into the action, too. The film has large ambitions, but at almost two hours, takes too long to complete them. (Disney + for an extra $29.99.) 3 out of 5

MOXIE: The high school comedy is updated and made relevant by Amy Poehler, both acting and directing. The students in Footloose only agitated about a ban on dancing. These get into gender rights, abuse and “the patriarchy.” A generally timid student (Hadley Robinson) is offended at a rating system at her school that ranks girls in categories like “best ass” and “most bangable.” She decides to speak out like her mother (Poehler), who joined political campaigns in her youth. But she tries to stay anonymous by simply writing a small magazine and placing it around the school. She calls it Moxie.

It catches on. She’s a secret celebrity and girls follow her calls for walkouts and boycotts. The principal (Marcia Gay Harden) is perplexed. A Black student (Alycia Pascual-Peña) inspires more action. A friendly boy is supportive; and an old friend is not. The movement coalesces around a vote: Will the students support the popular football player (Patrick Schwarzenegger, yes Arnie’s son) or a star on the girls’ soccer team (Sydney Park) for a special honour? The campaign and the movie are light and breezy (“I’m going to hold my head up, and high”), then turns dark, too briefly but with a strong message. (Netflix.) 3½ out of 5

LAND: Robin Wright is another actor multi-tasking as a director, and she creates a gem in this, her first effort. She plays a woman who after a tragedy, finds it “difficult to be around people.” She retreats to a mountain cabin in Wyoming (played by Alberta, to tell the truth) and lives alone as best she can. Which isn’t great. She hears animal noises at night. Can’t chop wood. Can’t bear to shoot a deer for food. She often has flashbacks to an event that triggered her troubles. The freezing cold gets to her; she almost dies.

A local hunter (Demián Bichir) finds her, a nurse helps her, and she has to accept the company of people. It’s a slow recovery. She and the hunter gradually let a friendship grow and eventually talk about the events that caused their trauma. Not much happens other than that, but it’s highly involving, anyway. You feel for these characters and take pleasure in the ever-widening kindness they display. The acting is excellent and the mountain cinematography is superb. (Available on Prime video on demand.) 4 out of 5

STRAY: Dog lovers, for sure, but I think anybody could enjoy this film that follows, lingers with and watches a group of canines on their normal days and nights. There are three main ones, Zeytin, Kartal, and Nazar, and at times, dozens of others. They happen to be in Istanbul, Turkey, which has an interesting story regarding them. The city tried to get rid of them some years ago, but after public protests, changed the laws and made it illegal to euthanize a stray dog. There are lots of them now.

Elizabeth Lo spent several years filming them on their wanderings, their search for food and partners, and a couple of times in their fights. The messy actions, too. In a parallel situation, three young men befriend them and let them sleep with them in squatters quarters in a soon-to-be torn-down factory. They’re refugees from Syria and like many homeless people, have dogs to keep them warm. There’s no narration. We hear voices now and then from nearby people talking about the Erdogan regime and the usual subjects. Also quotes put on screen, like this one from Diogenese: “Dogs and philosophers do the greatest good and get the fewest rewards.” Stray they may be, but these dogs come across as noble. (Available at VIFF Connect.) 3½ out of 5

UNDERPLAYED: DJs playing electro music often become stars, not many are women though. Not according to this documentary by Stacey Lee and Billboard magazine, which sometimes publishes a list and rankings. The one this film draws on has only five women listed in the Top 100. Why? it asks. Women are into the technology, too, but people assume it’s mostly men. Club owners think men are a bigger draw, so that’s who they hire. The film shows the other side by visiting six women who are active in the art and perform under exotic names: Nightwave, Tygapaw, Nervo, Sherelle, Alison Wonderland and the big star Rezz, legally known as Isabelle Rezazadeh.

She’s from Niagara Falls, Ont., and is a true superstar. We first see her tweak the sounds from her machines — “adding bass,” “shorten the envelope to make it more organic,” and so on. She’s known for slow, hypnotic beats. We get some music (not enough, though) from all these women, often before huge crowds at festivals. And we get the message that they bring a different something to the art form. The film doesn’t say exactly what that is, but I’ll believe it. Pioneers, like Clara Rockmore, Grace Jones and Wendy Carlos are remembered and besides passing on information, the film celebrates following your dream. (Streaming worldwide starting Monday.) 3 out of 5

PANDEMIC: This is an American remake of a Korean film called #Alive, which was a big hit there and on Netflix last year. (You can still find it on there.) The new version was originally titled Alone, but somebody got the bright idea that this name would work better. Oh? We’re living through a pandemic, do we really want to see movies about one? Anyways, this is really a zombie movie. They roam the streets and the halls of our main character’s apartment building. He, played by Tyler Posey, is trapped, has pushed his fridge to block his door, and does not dare go out. Noises, pleas and screams occur just outside.

He does manage to communicate with a young woman (Summer Spiro) in another building across the alley, and since she’s running out of food and water, as he is, tries to help her. He crawls through an air duct, gets into an adjoining apartment and finds food and Donald Sutherland. He plays a spacey, philosophical man who wields a home-made weapon and is in the film for about 10 minutes. Who knows why. Maybe to add some class. The film can use it since it mishandles its central issue, psychological disintegration in lockout. It’s better with the fall-back: Taking a baseball bat to any zombies that come around. (Available VOD and digitally now and on DVD and Blu-ray next month.) 2½ out of 5