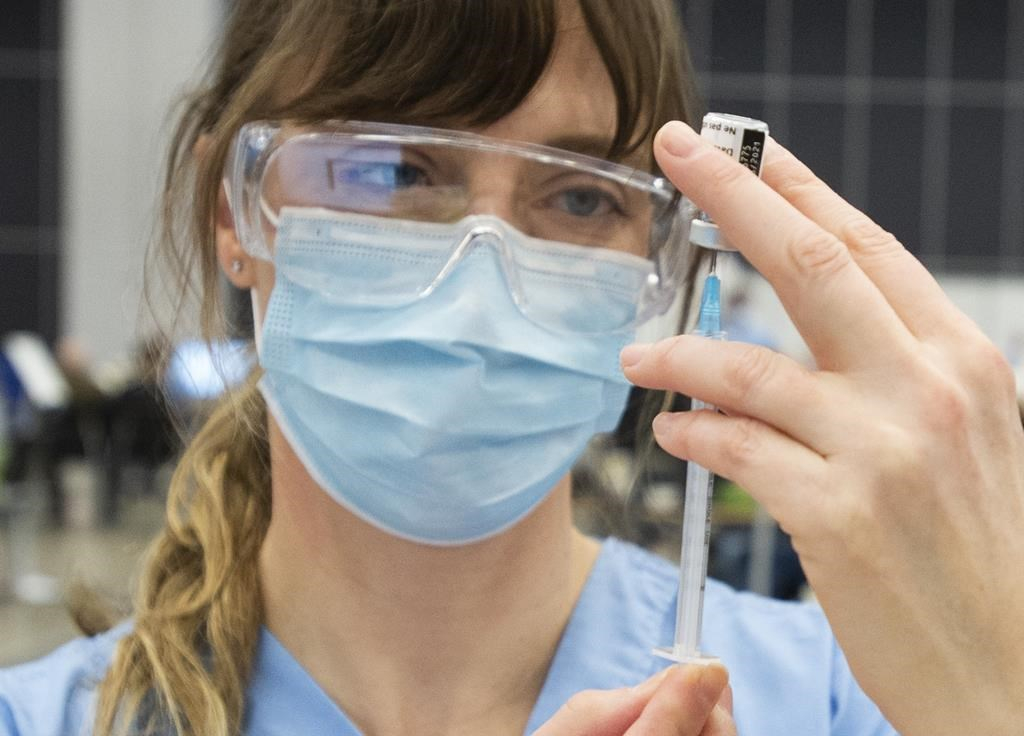 Health-care worker Jenne Saunders prepares a dose of the COVID-19 vaccine at the Palais de Congress site as Quebec begins mass vaccinations based on age across the province on March 1, 2021 in Montreal. File photo by The Canadian Press/Ryan Remiorz
Previous story
Next story

Canada is set to receive 910,000 COVID-19 vaccine doses this week as pharmaceutical companies ramp up deliveries to make good on their contractual obligations by the end of the month.

The Public Health Agency of Canada says the country will receive nearly 445,000 shots from Pfizer-BioNTech for the second week running as the companies settle into a rhythm following a lengthy lull in January and much of February.

The remaining 465,000 shots are expected from Moderna, as the pharmaceutical firm steps up its delivery schedule from once every three weeks to once every two.

The influx of new shots comes as the federal government looks for vaccine-makers to finalize delivery of a total of eight million doses by March 31.

That includes 5.5 million from Pfizer-BioNTech — up from the four million originally expected — and two million from Moderna. Canada received 500,000 doses of the AstraZeneca-Oxford vaccine last week.

The federal government is not expecting any new deliveries from AstraZeneca-Oxford, nor does it anticipate receiving shipments of the newly approved vaccine from Johnson & Johnson until next month.

At that point, however, both manufacturers are on tap to deliver millions of shots per month.

That includes more than a million doses per week from Pfizer-BioNTech starting in the last week of March and into the following month.

Johnson & Johnson, whose single-dose vaccine received Health Canada approval on Friday, is the fourth inoculation to receive the green light from the regulator.

It uses a modified common-cold virus to carry a piece of the SARS-CoV-2 virus that causes COVID-19 to convince the body to mount an immune response to prevent future infections.

"We can be really increasingly optimistic in our outlook and that is really great," Dr. Theresa Tam, Canada's chief public health officer, said on Friday.

Procurement Minister Anita Anand said the government has now confirmed total deliveries of 36.5 million vaccine doses by Canada Day which would be more than enough to get a single dose to each adult Canadian by then.

That doesn't include any of the 10 million doses purchased from Johnson & Johnson, and includes none of the 20 million doses coming directly from AstraZeneca.

Every vaccine except Johnson & Johnson's is given in two doses, but provinces are moving to implement new guidance from the National Advisory Committee on Immunization stating those shots should be spaced out up to four months apart rather than three or four weeks.

Provinces are making the move to get more people vaccinated with a first dose, after real-world evidence showed strong data that one dose is highly effective on its own.

Nearly 1.7 million Canadians have now received at least one dose, and the pace of vaccinations has accelerated in the last two weeks. In the past seven days alone, more than 457,000 people were vaccinated, 2 1/2 times as many as in a similar period two weeks before.

Everything you need to know about the Johnson & Johnson vaccine