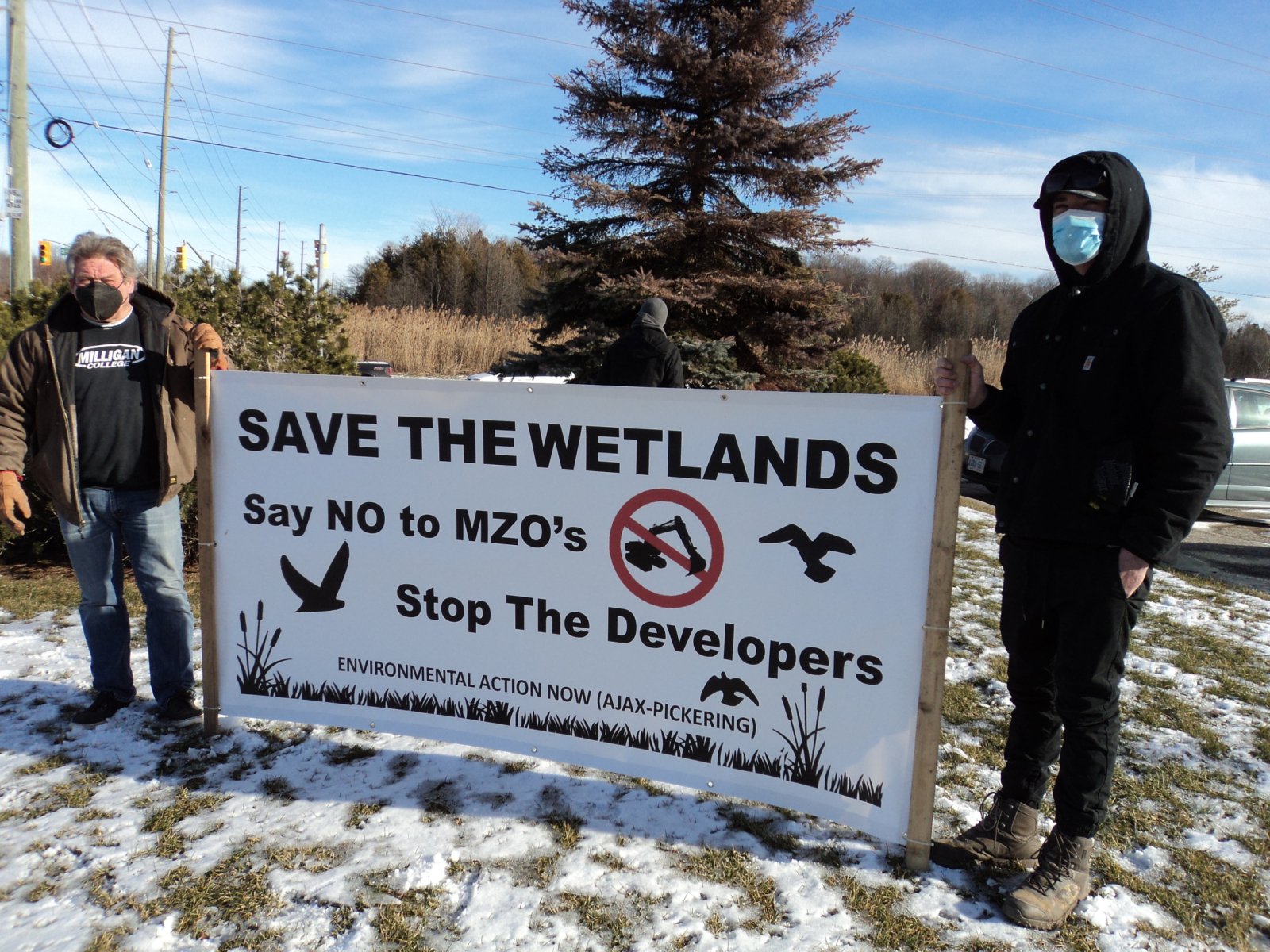 Protesters blockade the site of Durham Live, a development in Pickering, Ont., that received an MZO last year, on Jan. 9, 2021. Construction would involve paving over a protected wetland. Photo courtesy of John Oliver
Previous story

The developers behind the controversial Durham Live project donated thousands to the Progressive Conservatives days before the government cleared the way for the project.

A warehouse connected to Durham Live, a casino complex proposed by developer Triple Group, is slated to be built on top of a protected cluster of marshes and swamps connected to the Duffins Creek watershed in Pickering, Ont. Though building on top of such wetlands is usually forbidden, the Ford government fast-tracked the project with a special zoning order in October, then introduced a bill Thursday that may nullify a lawsuit standing in the way and ordered the local conservation authority to give Triple Group a permit.

Triple Group is run by the billionaire Apostolopoulos family, which donated $15,000 to the Progressive Conservatives between 2018 and 2020. Brothers Jim, Peter and Steve Apostolopoulos each donated a further $1,600 to the party on Feb. 24, eight days before the government introduced the bill, the Ontario NDP pointed out Monday.

“Does the premier really think that Ontarians are that gullible, that there's no connection between the donations and what you are designing through legislation for developers, especially when his government bends over backwards to accommodate his big donors?” Ontario NDP finance critic Catherine Fife said in question period Monday. The speaker asked her to withdraw the comments.

Milton MPP Parm Gill, the parliamentary assistant to Municipal Affairs Minister Steve Clark, fired back, pointing out that the Apostolopoulos family also donated to the Ontario Liberals. (The family donated to the Liberals when they were in power, but switched their contributions to the Progressive Conservatives when the party formed government in 2018.)

“This is an important project for the region,” Gill said. “To answer the question in terms of the political donations, I reject the premise of the question altogether.”

Triple Group didn’t immediately reply to a request for comment, but the company has previously denied that the Apostolopoulos family’s donations played any role in the province’s support for Durham Live.

Though Durham Live has been backed by the City of Pickering, the neighbouring Town of Ajax, which Duffins Creek runs through, is opposed. The project has also been criticized by Williams Treaties First Nations and all three opposition parties in Ontario’s legislature. Local critics have held regular protests about it since November, including one Saturday.

Later Thursday morning, the project also came under fire from a coalition of environmental groups, which filed an application in court in an attempt to block Triple Group from getting a permit.

The developers behind the controversial Durham Live project donated nearly $5,000 to the Progressive Conservatives days before the government made two moves to enable a warehouse to go on top of a protected wetland.

Conservation authority to issue permit ‘under duress’ by Friday

Though the government’s special zoning order ⁠— called a ministerial zoning order or MZO ⁠— allowed Triple Group to skip the usual approvals process, Durham Live still needs a permit from the Toronto and Region Conservation Authority to go ahead.

The conservation authority initially said it couldn’t allow development on protected wetlands, which are ecologically rich and naturally mitigate floods. But in December, the Ford government changed the law so conservation authorities can no longer refuse permits for projects that have received MZOs.

It used this power Thursday when ordering the TRCA to issue a permit for Durham Live. On Friday, the TRCA said it would agree to issue the permit by March 12, but only because it was “under duress” from the province. The TRCA “would ordinarily decline permission of such a permit," the organization said in a statement.

On Monday morning, non-profits Ecojustice, Environmental Defence and Ontario Nature said they had filed an urgent motion in Ontario Divisional Court to ask a judge to stop Triple Group from proceeding. The three organizations filed a lawsuit in November to challenge Durham Live's MZO — although the bill introduced by the government could render part of their argument moot, the case is scheduled to be heard in the fall, and the motion filed Monday argued that construction shouldn't go ahead until a judge has ruled on the case.

“The Ontario government has ignored its own planning laws by approving this development,” Ecojustice lawyer Laura Bowman said in a statement.

“The legality of the zoning authorization should be tested before the wetland is destroyed forever.”

The office of Municipal Affairs Minister Steve Clark declined to comment on the motion.

Meanwhile, the TRCA is seeking to attach conditions to the permit in an attempt to “lessen” the environmental impacts of the project. The developer is currently fighting those conditions, the TRCA said.

The conservation authority will have a meeting to finalize the permit Friday. Due to rules changed by the Progressive Conservatives in December, the developer can later appeal the TRCA’s conditions directly to the provincial government.

This story was updated to include additional information about the motion filed in court by Ecojustice, Enviornmental Defence and Ontario Nature.

$5K? The Ontario PC's are certainly a cheap date - willing to lay down immoral, unethical and illegal actions to swell their election coffers? Didn't want to sully the term used for "working" women by using it against the PC's but they don't seem to mind selling out the provincial wetlands for a pittance.

It is a fact that wetlands

It is a fact that wetlands create pure drinking water for free.
But we need to store more stuff.
How do we store more stuff without building more warehouses on wetlands?
We need to be practical here; we can't have it both ways.