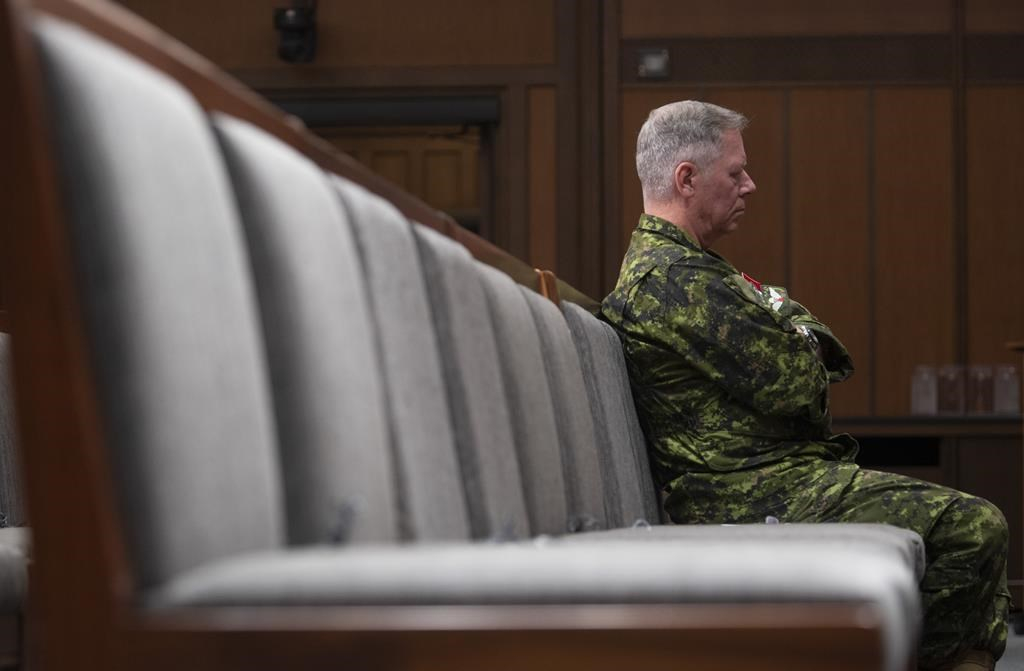 Chief of Defence Staff Jonathan Vance sits in the front row during a news conference in Ottawa on June 26, 2020. File photo by The Canadian Press/Adrian Wyld
Previous story
Next story

The Trudeau government and Opposition Conservatives marked International Women’s Day on Monday by trading barbs and accusations over reported threats against a senior naval officer who brought forward an allegation of misconduct against Canada’s defence chief.

The bitter back-and-forth came as members of the House of Commons defence committee agreed to invite a bevy of new witnesses to testify in an expanded probe of the Liberals’ handling of allegations against the military’s top brass.

Global News has reported Trotter subsequently received two threatening phone calls from blocked numbers, one from a person claiming to be a military officer and the other from someone who identified themselves as “a senior member of the Canadian government.”

The callers allegedly warned Trotter against co-operating with the Commons defence committee’s investigation, and that his military career would be over if he did.

In response, Conservative defence critic James Bezan and fellow Tories Pierre Paul-Hus and Leona Alleslev released a statement Monday accusing the government of having “undertaken a co-ordinated campaign to threaten and silence a sexual misconduct whistleblower.”

“This is more evidence that Justin Trudeau and his Liberal government have gone to great lengths to coverup allegations of sexual misconduct in the Canadian Armed Forces,” added the statement.

“Threatening a member of the Canadian Armed Forces to secure their silence is a clear and concerning abuse of power. The lengths that the Liberal government will go to in order to hide the truth from Canadians is appalling.”

“Not only was the minister’s office not aware of the identity of the caller prior to media reports, any insinuation that our government made threatening comments is utterly false,” Sajjan’s spokesman, Todd Lane, said in a statement.

“This baseless accusation from the Conservative party harms confidence in the processes that exist to help those who come forward with complaints of misconduct. This reckless insinuation only serves to create doubt for those who step forward and those considering it.”

Both Lane and the Department of National Defence also released a brief timeline for when the allegation against McDonald was received and how it was handled, saying the first call from a “third party” came in Feb. 4.

That call went to a switchboard operator and was soon referred to the Canadian Forces National Investigation Service, according to the Defence Department, which launched an investigation without McDonald’s knowledge.

“When the switchboard received a complaint of misconduct, it was immediately relayed to an official in the Department of National Defence,” Lane said. “At no time did any staff in the office of the minister speak with the caller.”

The Defence Department added that McDonald only became aware of the investigation Feb. 24, “when case-specific information was disclosed.” McDonald temporarily stepped aside that same day, with Lt.-Gen. Wayne Eyre taking over as acting defence chief.

The CFNIS would not say Monday whether it is investigating the alleged threats against Trotter.

Following the report about Trotter, members of the Commons defence committee voted Monday to summon him for questions.

“The reason it needs to be a summons is he's a person that is still in the chain of command,” Bezan said.

“According to reports … he's already faced intimidation and threats that his career is over. So we want to make sure that he feels free to appear without fear of reprimand. And the only way we can ensure that he can appear is to summon him through a subpoena.”

Committee members also agreed to invite Sajjan back to clarify what opposition members say are contradictions between his testimony and that of former military ombudsman Gary Walbourne.

Walbourne told the committee last week he first raised an allegation of sexual misconduct against then-chief of the defence staff Gen. Jonathan Vance to the minister in March 2018.

The committee is also inviting Zita Astravas, who was Sajjan’s chief of staff at the time, and Elder Marques, who was a senior adviser to Prime Minister Justin Trudeau, to explain when they became aware of the allegations against Vance and what they did about them.

Committee members will also look into how Vance was selected to serve as chief of the defence staff in 2015, with invitations to be extended to Harper’s former chief of staff Ray Novak and then-defence minister Jason Kenney’s top aide at the time.

Global News has reported allegations Vance had an ongoing relationship with a subordinate that started more than a decade ago and continued after he was named chief of the defence staff, at which time he promised to root sexual misconduct from the Armed Forces.

Global has also reported on allegations about Vance sending the email to a much younger female officer in 2012, suggesting they go to a clothing-optional resort.

Vance has not responded to repeated requests for comment from The Canadian Press and the allegations against him have not been independently verified. Global News has reported that Vance has denied any wrongdoing.

The CFNIS has confirmed that it opened an investigation in 2015 into Vance’s conduct while he was serving in Italy the previous year, but that it “did not meet the elements of the offence to lay charges.”

Military police have since opened an investigation into the allegations reported by Global. Sajjan has also promised a separate investigation, but it has yet to be launched.