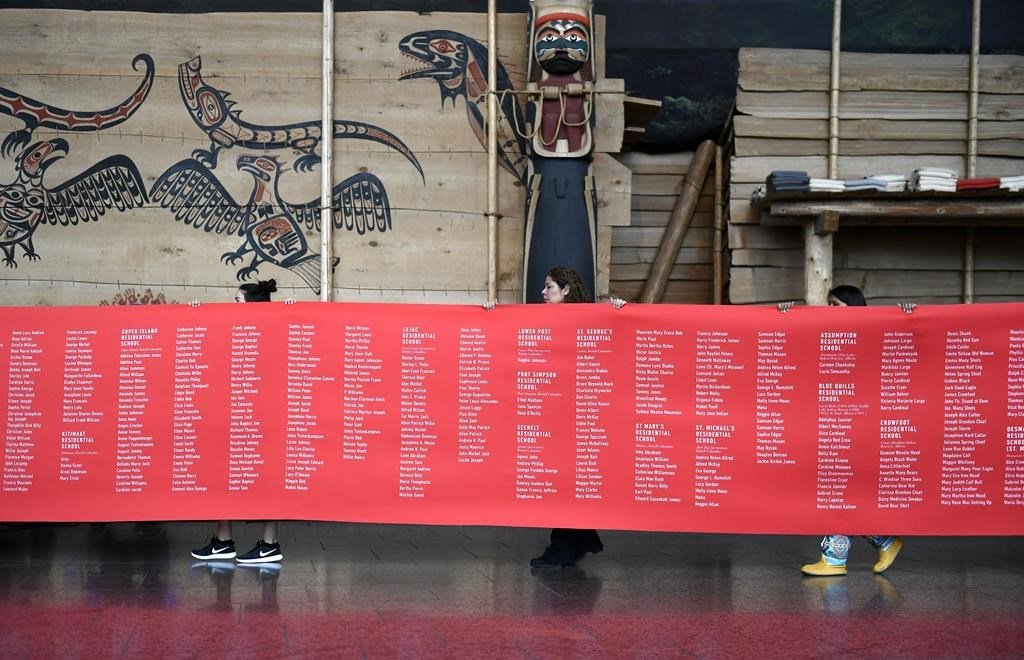 A ceremonial cloth with the names of children who died in residential schools is carried to the stage during the Honouring National Day for Truth and Reconciliation ceremony in Gatineau on Monday, Sept. 30, 2019. THE CANADIAN PRESS/Justin Tang
Previous story
Next story

TORONTO — The cost of compensating thousands of victims of Canada's notorious residential schools amounted to more than $3 billion, according to a report released on Thursday.

The final report from the committee overseeing the compensation process that began in 2007 provides a comprehensive overview of the efforts to redress the damage inflicted on generations of Indigenous children.

While the school experience was positive for a relative handful of the children, many others were sexually, physically or psychologically abused in a system designed to get the Indian out of the child.

"Children as young as three were forcibly removed from their families and communities and taken to the schools," the report states. "For most, the residential school system was profoundly negative and had a lasting impact on the children, on their families, and on their culture."

The first known of the schools were established in the 1820s. The last one closed in 1997. In all, roughly 150,000 First Nations, Inuit and Métis children attended.

The court-approved compensation scheme, known as the independent assessment process, arose out of a comprehensive class-action settlement in 2007 involving survivors, the federal government and churches that ran the schools.

Claimants were entitled to up to $275,000 each based on the nature and level of abuse suffered.

In all 38,276 claims — Saskatchewan had the most claimants — were received. Adjudicators awarded $2.14 billion in compensation to 23,431 claimants, while another 4,415 claimants received compensation directly from the federal government.

Overall, the government paid out $3.23 billion in compensation and other costs. The process itself cost another $411 million.

The report also outlines abuses by some lawyers, who saw the claims process as a way to cash in on the backs of their already victimized clients. In one case, for example, a torrent of complaints prompted the courts to bar a Calgary-based lawyer and his firm from representing more than 5,600 clients. Another lawyer was disbarred for allegedly taking $1 million from claimants.

In all, nearly 28,000 victims of residential schools were compensated, and the government paid out more than $3 billion. #ResidentialSchools #Indigenous

"The issue of lawyer misconduct by a minority of legal counsel was a significant challenge with far-reaching consequences," the committee says in its report.

The claims process itself also ran into several lengthy legal battles, including one over whether individual claimant information and their stories should be destroyed. In that case, it was decided the chief adjudicator would destroy the documentation after Sept. 19, 2027, unless claimants want a copy for themselves or to share publicly.

Other fights include one over the federal government's failure to turn over thousands of pages related to a criminal investigation into St. Anne's in Fort Albany, Ont., a residential school where students were subjected to horrific sexual and physical abuse, including being shocked on an "electric chair" and forced to eat their own vomit.

Edmund Metatawabin, a survivor of St. Anne's, said the struggle for a fuller narrative over what happened at the school, as well as for Indigenous rights, continues.

"It doesn't mean that we are finished, that we will stop, just because the IAP is going to be terminated," said Metatawabin "It's an unfinished story that keeps getting brushed aside. That's what hurts."

While the compensation process is now over, the report does speak of the need to continue the "healing journeys" of survivors, their families and communities. There is also a need to address the impacts on contemporary Canadian society as a whole, it says.

"The ongoing effects of residential schools are revealed in the low levels of educational attainment and high rates of unemployment, under-employment, poor health, poverty and suicides among children of survivors," the report states. "It is shown in the disproportionate number of Indigenous children apprehended by child welfare agencies and involvement of Indigenous people in the criminal justice system."

Building that housed pain and fear scheduled for destruction