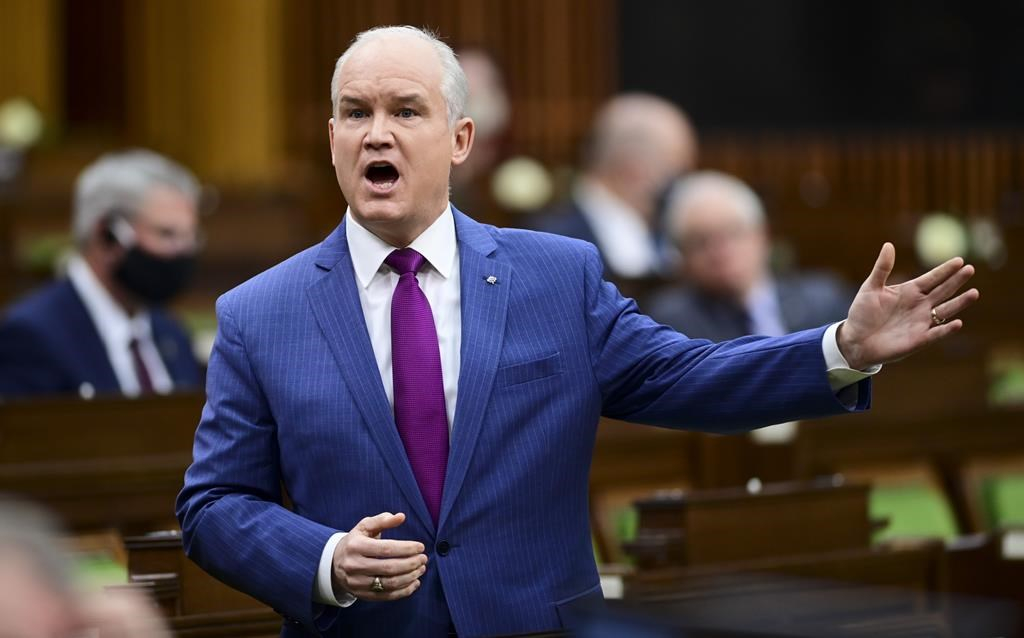 But he said he would look to mirror previous Conservative foreign aid programs that tied funds to specific, measurable outcomes.

"I want to maintain and modernize and make more accountable our development funding," he said during a virtual event with Cooperation Canada, an umbrella organization for international development agencies.

"There will not be cuts. There will be a renewed focus on outcomes."

In the 2019 federal election, then-Conservative leader Andrew Scheer pledged to cut foreign aid by 25 per cent, alleging that Canada was too generous with its overseas support, especially for middle-income countries.

Though it was a popular line in Scheer's speeches to supporters, the move was pilloried by the international aid sector, which said it would undermine Canada's global standing.

As recently as last week, the Liberals accused the Tories of still wanting those cuts as the parties sparred over their mutual foreign aid records in debate over post-pandemic international development.

O'Toole acknowledged Tuesday the pandemic has taken a massive toll on global progress, but said how to address that can't be decided until well past the pandemic's end.

But he sought to lay out some of the principles that would underpin foreign policy in a Conservative government, should one be elected next.

The advancement of peace, justice, and human rights would be a central tenet, O'Toole said.

That would include reopening the Office of Religious Freedom, a stand-alone quasi-diplomatic post set up by the previous Conservative government but turned into an element of the Global Affairs department under the Liberals.

O'Toole noted that with the persecution of Uyghur Muslims in China, Christians in the Middle East and a rise in anti-Semitism around the world, the fight for religious freedoms matters.

O'Toole also sought to make a connection between his aggressive stance against China and that country's engagement in the international aid space, accusing the Chinese regime of "weaponizing" aid to expand their sphere of influence.

"On the humanitarian front, but also in our fight for democracy, we cannot leave the field wide open for bad actors who have none of the sincere compassion and values we do," he said.

O'Toole's remarks come ahead of this week's Conservative policy convention, where grassroots members are aiming to shape the party's platform for the next election.

For years, the social conservative wing of the party has sought to dominate the convention and enshrine their opposition to abortion into the party's official positions.

When the party was in government, they also tried to advance their ideas in Parliament, but on both fronts they have rarely met with success — except on international development.

A declaration by former prime minister Stephen Harper's Conservative government that Canadian aid dollars could not be used to fund abortions overseas is one of the few times anti-abortion groups have chalked up a political victory.

The pledge, however, would go on to colour the signature aid program of the Harper years, and one that O'Toole spoke glowingly about on Tuesday: the Muskoka Initiative.

Harper had declared maternal health to be a key focus for foreign aid under his government.

When Canada led the G8 in 2010, he spearheaded an effort that saw upwards of US$7.3 billion in new funding globally over five years for programs focusing on maternal, newborn, and child health. While the money improved outcomes, that none of Canada's funds could support abortion services has been a stain on Canada's contribution, as many health organizations maintain access to safe abortion is a crucial element of maternal and reproductive health.

The Liberals reversed course on the funding ban when they formed government, though haven't dropped the issue from their political attacks against the Conservatives.

During the party's leadership race, O'Toole had said he supported Harper's approach, and would keep it in place.

O'Toole said Tuesday the world needs more programs like the Muskoka Initiative, with specific benchmarks so people can see where and how their aid dollars are used.

"I want to make sure that we develop clear and attainable development goals, fund them and drive partnerships," he said.

"And so those commitments to human rights, to dignity and to democracy, will colour everything we do from a diplomacy, a development, a security and a military perspective."