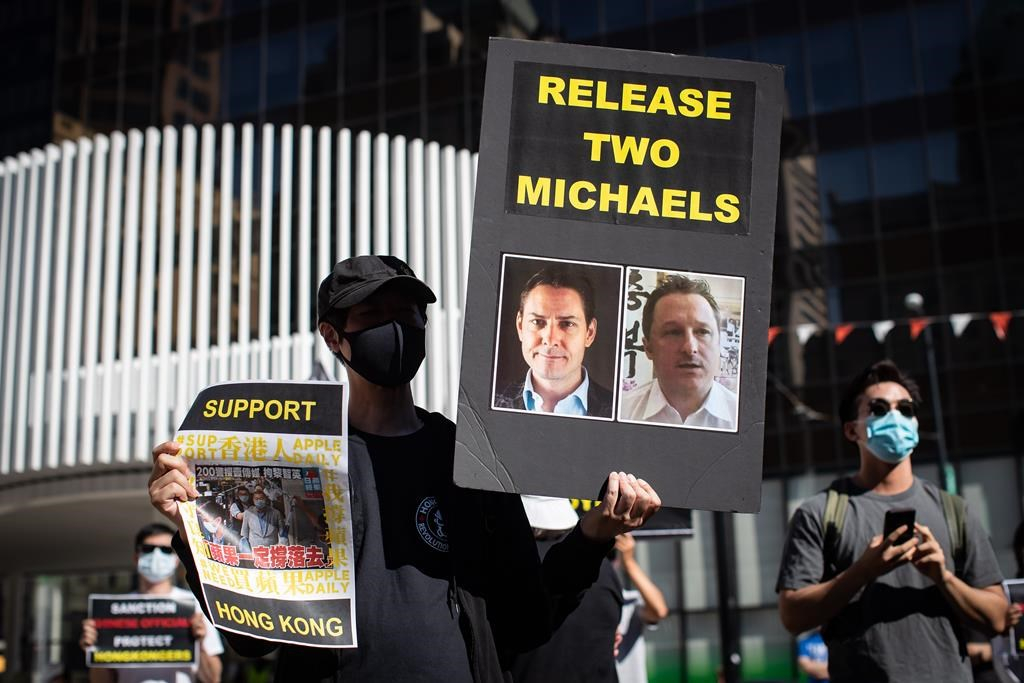 A person holds a sign with photographs of Michael Kovrig and Michael Spavor, as people gather for a rally in support of Hong Kong democracy, in Vancouver on Aug. 16, 2020. File photo by The Canadian Press/Darryl Dyck
Previous story
Next story

Michael Spavor and Michael Kovrig, the two Canadians detained by China in 2018 as part of a high-stakes trilateral stalemate with the United States, are facing separate court hearings in the next week.

The Canadian Embassy in Beijing has been notified that Spavor's court hearing is scheduled for Friday — one day after Chinese and American officials are scheduled to meet in Alaska.

"The arbitrary detention of Mr. Kovrig and Mr. Spavor is a top priority for the government of Canada and we continue to work tirelessly to secure their immediate release," Garneau said.

"We believe these detentions are arbitrary, and remain deeply troubled by the lack of transparency surrounding these proceedings."

Garneau said Canada has asked to attend the hearings, and that they continue to request ongoing consular access to the pair in accordance with international treaties.

"Canadian officials will continue to provide consular support to these men and their families during this unacceptable ordeal."

The timing is interesting, coming as it does on the eve of Thursday's closely watched meeting in Alaska between emissaries from Beijing and Washington.

The Wall Street Journal reported Wednesday that China will use the meeting to ask the U.S. to lift sanctions imposed by the former Trump administration on certain Chinese nationals and entities, including the tech giant Huawei.

The newspaper also reported that China will propose a meeting between U.S. President Joe Biden and Chinese counterpart Xi Jinping on the margins of next month's global conference on climate change.

The two Canadian men, known to many around the world simply as "the two Michaels," were detained in December 2018, just days after police in Vancouver arrested Meng Wanzhou, Huawei's chief financial officer and the daughter of the company's founder.

Michael #Spavor and Michael #Kovrig, the two Canadians detained by #China in 2018 face separate court hearings in the next week. #CDNPoli #TwoMichaels

Meng was detained at the behest of the U.S. Justice Department, which is seeking her extradition to face fraud and conspiracy charges linked to what prosecutors say was an elaborate effort to evade American sanctions against Iran.

Critics and allies alike have described their detention as retribution for Canada's role in detaining Meng, currently at the centre of an ongoing extradition hearing in Vancouver.

Biden and Secretary of State Antony Blinken recently joined the roster of world leaders who have spoken up on behalf of Kovrig and Spavor, part of an ongoing reset of Canada-U.S. relations in the post-Trump era.

That same week, Blinken pledged "absolute solidarity" with Canada after his own virtual conference with Garneau and a host of other Canadian officials, including Kirsten Hillman, Canada's ambassador to the U.S.

Blinken also cheered the Declaration Against Arbitrary Detention in State-to-State Relations, a Canadian initiative comprising a coalition of more than 50 countries opposed to the state-sponsored political detention of foreign nationals.