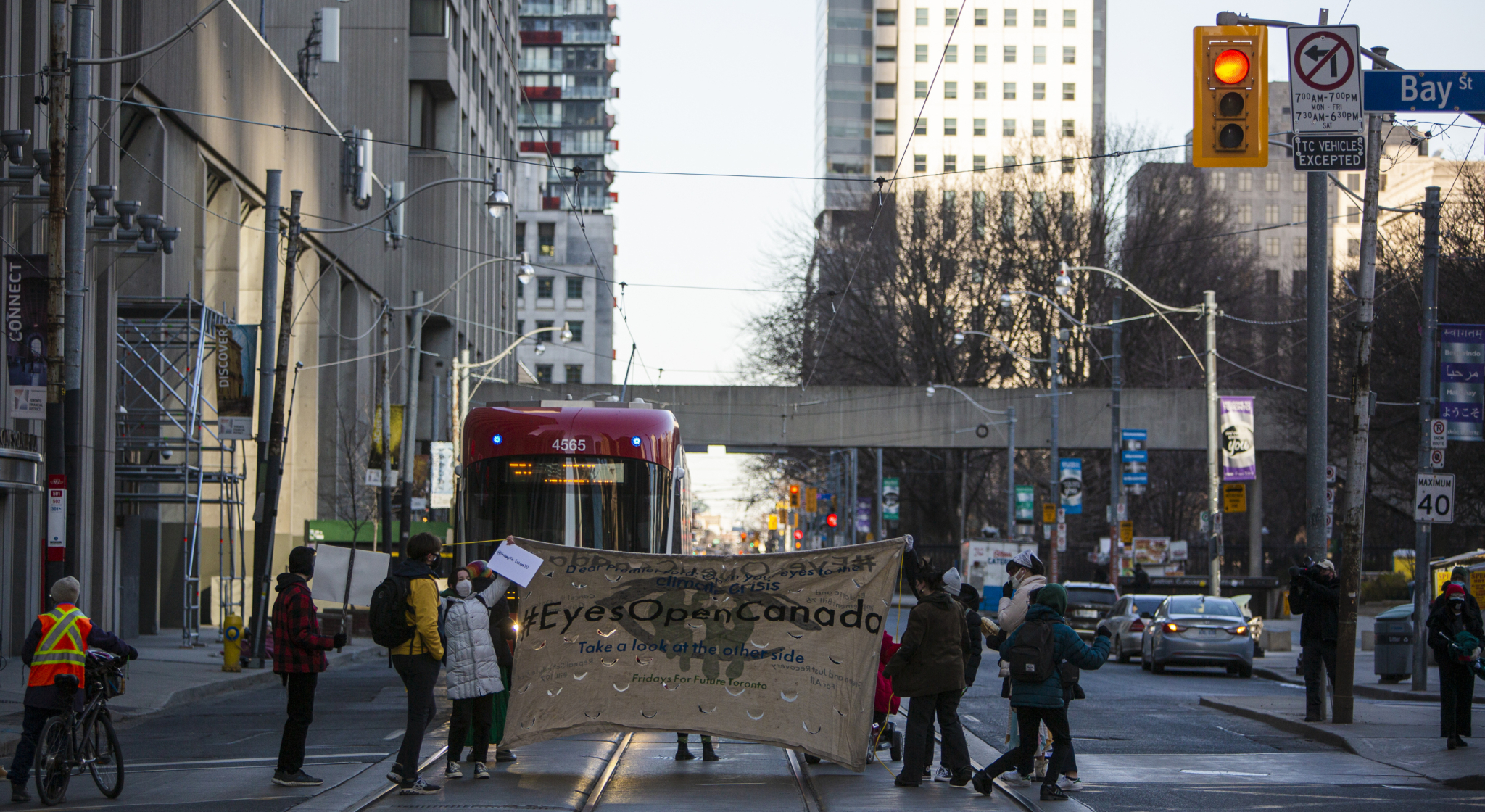 Climate activists block traffic in downtown Toronto as part of a global day of action. Photo by Nick Lachance
Previous story
Next story

It was one of the smaller-scale actions young people around the world took on Friday to demand governments and companies do much better in the fight against climate change, with Canada’s biggest city still mostly locked down by the COVID-19 pandemic.

But it was effective, with around 40 or 50 young, socially distanced climate activists disrupting traffic on a major thoroughfare between city hall and the city’s financial district through the morning.

“The voices of the youth are very, very strong, and we are sending a very clear message that we want feasible climate targets and we want promises not to be broken and not to be empty,” said Ira Puri, one of the Fridays for Future organizers of the Toronto action.

The chapter of the global movement inspired by Swedish teenager Greta Thunberg is demanding Toronto’s mayor and city council meet with them and explain how the city is living up to the promises made in its 2019 declaration of a climate emergency.

Youth organizers say that, despite promises to do so at that time, city officials have not consulted with them since, nor published any reports from the municipality's TransformTO climate plan.

The city said in an emailed response that it had published an implementation update (PDF) in 2020, which could be found several levels into the root and branch of a city website documenting its climate strategy.

Greenhouse gas emissions in the city were down 37 per cent in 2018 compared to 1990, the city’s environment and energy division said, meaning it expected to meet its 2020 target.

(Toronto uses a methodology that gets data on community-wide GHG emissions from energy use in buildings, vehicles, waste and industry 18 months after the fact.)

It also said climate change and resilience were key themes in its September 2020 report on COVID-19’s impacts and opportunities, and that Mayor John Tory had endorsed the C40 big city pledge of a green and just recovery and made plans (PDF) to work on that.

Its next update is due in the last three months of the year, and will propose additional interim and sectoral targets beyond the existing 65 per cent reduction by 2030 target, the city said.

“Public and stakeholder engagement on the strategy development will occur throughout 2021,” the email said, and will seek out “youth, NGOs, and climate science and action experts.”

The co-ordinated action was Toronto’s first climate protest since September, itself a year after millions of people took to the streets demanding the systemic change required to slow the warming of the planet and stave off the worst effects of a more extreme climate.

But its organizers have not been dormant during the pandemic, working on several projects, including the Climate Pledge Collective’s BankSwitch campaign that encourages Canadians to shift their finances from the country’s five biggest banks (RBC, TD, CIBC, BMO and Scotia) to a credit union or other institution that does not invest in fossil fuels, and also pushing the pension plan of Ontario’s teachers to divest.

Ruby Swartz, an 18-year-old who graduated high school last June and is taking a gap year to organize, said she was hopeful the actions would pressure governments to live up to and go beyond past climate pledges in order to recover from the COVID-19 and climate crises at the same time.

"We have to make changes anyway to recover from the pandemic, we might as well use it as an opportunity to get a green and just recovery," she said, speaking by phone while on her way from the action to her part-time job.

“It’s such a great opportunity, it's a once-in-a-lifetime opportunity to redefine what the new normal is going to look like,” she added. “It's such a hopeful time because we can put climate action into that conversation."

The Toronto activists joined peers in cities across Canada and the world, including Thunberg in Stockholm, in the global day of action.

In Vancouver, the youth movement Sustainabiliteens stood in solidarity with Indigenous land defenders against the Trans Mountain pipeline expansion, painting a mural outside an Environment Canada building.

The Liberal federal government bought the pipeline project for $4.5 billion in 2018, a move climate activists and Indigenous groups point to as evidence Ottawa does not care enough about the environment or reconciliation.

(Editor’s note: This story was updated at 7:00 p.m. Toronto time on March 19 to include a response from the city of Toronto’s environment and energy division and to add additional photographs and charts)

so disappointing, but nit

so disappointing, but nit surprising that these protests and divestment movements only make the on line progressive papers, NEVER mentioned in mainstream press.
sad but shows who the gatekeepers of "news" work for, and it is not citizens' health

Good on them. It was glanced

Good on them. It was glanced on in local TV news ... after the fact.
The entire city website is so opaque as to be impervious to anyone seeking information.
Neither can City departments be contacted by phone without passing the "guard dogs" at 311. Sometimes the'y're helpful in getting a message through, sometimes not so much.
Only the province is less "av avaiaible,." (unless one's counting the feds). They're not so much impervious as opaque ... and self-contradictory all over the place.
All three levels feature "empty communicaion circles," where everyone turns you on to smeone else who says it's not their job.-- If one's so lucky as to not just get full voice-mail boxes. Even those can take repeated dialing to reach. That's before you find out that there is no real enforcement mechanism except those that requqire the services of a lawyer.
Too bad there's nothing in the Charter about discrimination against those unable to pay to play.