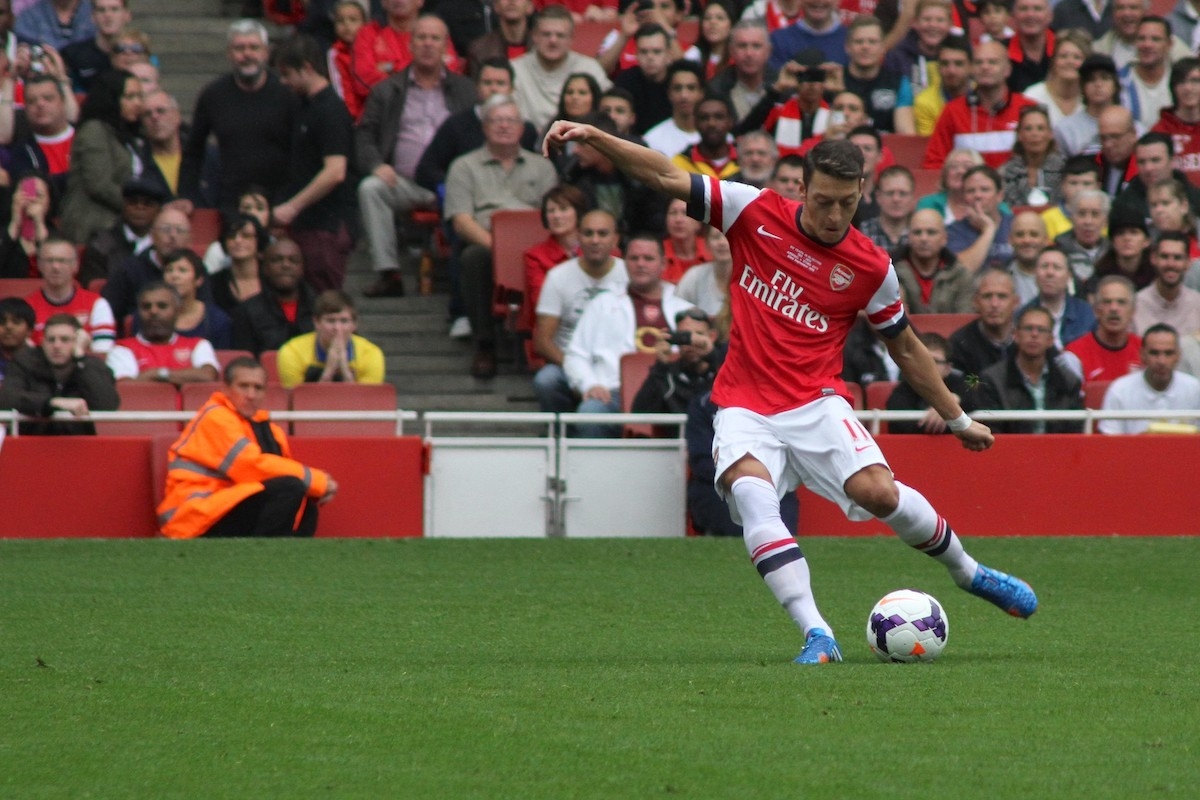 German footballer Mesut Özil plays for Arsenal FC in a match against Stoke City FC at the Emirates Stadium in London on Sept. 22, 2013. Photo by Ronnie Macdonald / Flickr (CC BY 2.0)
Previous story
Next story

Polluting industries are pouring hundreds of millions of pounds into sports sponsorship in an attempt to “sports-wash” their role in the climate crisis, according to the authors of a report published on Monday.

The study reveals more than 250 advertising and sponsorship deals between some of the biggest corporate polluters and leading sports teams and organizations.

Andrew Simms, a co-director of the New Weather Institute and one of the report’s co-authors, said: “Sport is in the front line of the climate emergency but floats on a sea of sponsorship deals with the major polluters. It makes the crisis worse by normalizing high-carbon, polluting lifestyles and reducing the pressure for climate action.”

The report, by the New Weather Institute, the climate charity Possible and the Rapid Transition Alliance, identified advertising and sponsorship deals with major polluters across 13 different sports, including football, cricket and tennis. Football was found to have the most deals, receiving 57 sponsorships from high-carbon industries ranging from oil and gas corporations to airlines.

Simms said: “We know about ‘greenwash’ — when polluters falsely present themselves as environmentally responsible. This is ‘sports-wash’ — when heavily polluting industries sponsor sport to appear as friends of healthy activity, when in fact they’re pumping lethal pollution into the very air that athletes have to breathe, and wrecking the climate that sport depends on.”

He said “major polluters” had replaced tobacco companies as big sports sponsors. “They should be stopped for the same reason tobacco sponsorship ended: for the health of people, sports and the planet.”

The authors of the report say sport will be the next battlefield in challenging the social licence of polluting industries.

“Sport has been a gamechanger in raising awareness and rapidly shifting opinions and policy on vital issues ranging from child poverty to racism,” said Simms. “Now it could be set to do the same for climate change.”

Some of the worst carbon emitters are the biggest sponsors of professional sports, according to a new report. #greenwashing #sports

The report claims that the car industry is the most active high-carbon sector courting sports sponsorship, with 199 different deals across all sports. Airlines come second with 63, followed by oil and gas companies such as Gazprom and Ineos, whose deals have previously been criticized by climate campaigns. When Ineos was preparing to take over sponsorship of Team Sky cycling in 2019, a spokesperson for the chemicals company said it was committed to moving towards a circular economy.

The report reveals the carmaker Toyota as the largest sponsor with 31 deals, followed by the airline Emirates with 29 partnerships.

A spokesperson for Toyota said it could not comment in detail without seeing the full report, adding that the company had been “the world leader in low-emission electrified vehicles for 25 years” and had “amongst the lowest CO2 fleet averages of any major volume manufacturer and is committed to some of the most ambitious environmental goals of any mobility company.”

Campaigners argue that the findings in the report appear to undermine recent pledges made by many clubs and sports bodies to take action on climate breakdown.

Melissa Wilson, a member of the GB rowing team for the Tokyo Olympics, is one of the athletes supporting the campaign. “As athletes, we focus a lot on keeping sport ‘clean’ through prioritizing anti-doping,” she said. “Yet continuing to pollute in the face of the climate emergency is the Earth equivalent of doping or scoring own goals. By keeping polluting sponsors on board, sports detract from their opportunity to play a productive part in the race to zero carbon. It’s time for sports and athletes to change that.”

Canada is losing the race to low-carbon prosperity