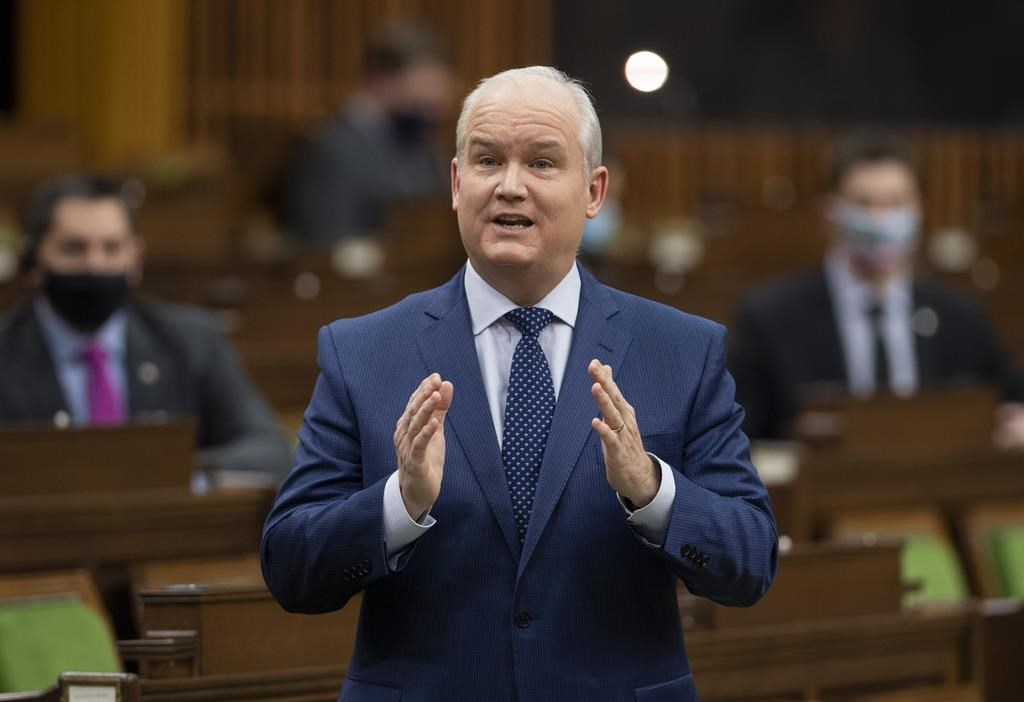 Leader of the Opposition Erin O'Toole rises during question period in the House of Commons, Wednesday, Feb. 3, 2021 in Ottawa. THE CANADIAN PRESS/Adrian Wyld
Previous story
Next story

OTTAWA — Federal Liberal cabinet ministers will instruct their staff not to appear if called to any parliamentary committees in an attempt to curb what they call an "abuse of power" by opposition parties.

Late Thursday, the House of Commons voted to back a Conservative move to summon political staff and civil servants to testify about the WE Charity affair and about how the government handled a sexual-misconduct allegation against the country's top soldier.

All the parties except the Liberals supported the motion.

Before the vote, government House leader Pablo Rodriguez said the Liberals will ignore the motion.

He argued that it has long been a practice of Parliament for the buck to stop with cabinet ministers when it comes to who is held responsible and questioned at committee.

The Conservatives' motion is nothing but a "heavy handed" form of partisan intimidation, Rodriguez said.

"Members of this House are protected from intimidation through our parliamentary privilege. It is irresponsible for members to turn this protection into weapons against those who are not covered by these protections," Rodriguez told the Commons.

"Not only is it irresponsible, it is a clear abuse of power."

The Conservatives' motion is aimed at getting three members of the prime minister's staff before the ethics committee to provide more information on the WE Charity affair.

They also want the former chief of staff to the defence minister, who now works for another minister, to appear at the defence committee to shed more light on sexual misconduct issues in the Canadian Armed Forces.

Government House leader Pablo Rodriguez said the Liberals will ignore a motion to summon political staff and civil servants to testify about the WE Charity affair and the handling of sexual misconduct allegations among military top brass. #cdnpoli

The motion included an out: if Prime Minister Justin Trudeau appears in the aides' place, for at least three hours, that would do.

"All of these individuals have direct knowledge of the issues the committees have been studying and they must testify so that Canadians can have the truth," Barrett said.

He dismissed any notion that Canadians are not as engaged on these issues as they are on the COVID-19 pandemic.

"We think it's very important to Canadians that when the government is spending hundreds of millions and billions of dollars, that it's done in an effective way."

The Conservatives have been trying to get those staffers to committees but have been thwarted by the Liberals either talking out the clock or using procedural moves to avert votes.

By introducing the motion in the Commons itself, the Conservatives hoped to do an end-run around the committees' machinations.

Liberal MPs debating the motion brought up instances when staffers were previously called to committee, including an appearance last summer by Trudeau's chief of staff, Katie Telford, during hearings on the WE Charity controversy.

These witnesses were repeatedly interrupted, badgered and accused of trying to withhold the truth from Canadians by opposition MPs, Rodriguez said.

That's why, despite the motion, Liberal ministers will be telling their staffers to ignore any future summons to committees and instead will only send cabinet ministers to testify, Rodriguez said.

—With files from Stephanie Levitz