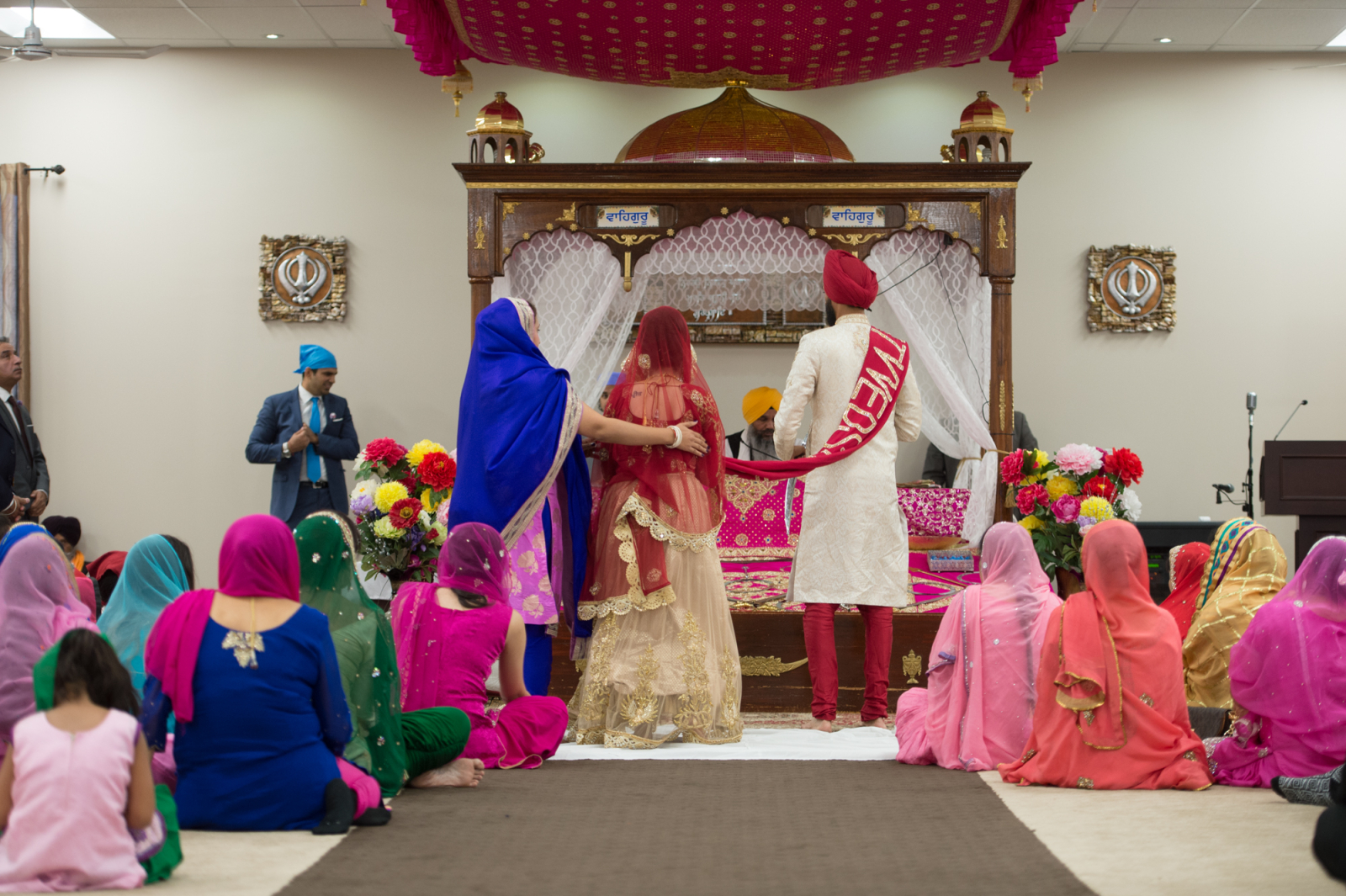 A Sikh couple prepares to be married at the Gurdwara. Photo by Jag Gundu
Previous story
Next story

Saliha Zahid had long desired a grand wedding, one that would unite friends and family from around the world. But a global pandemic has a way of putting dreams on hold, and Zahid understood that if she wanted to marry in June, a big wedding was not realistic.

“There's a lot of anxiety around preparing, finding vendors, but just not the regular wedding stress. We have this pandemic stress that's impacting us in all sorts of ways,” said Zahid, a Pakistani-Canadian preparing to marry in mid-June.

In South Asian culture, it has become customary to hold weddings where the guest list exceeds 500 people — some go into the thousands. But with public health guidelines limiting large gatherings, it’s no longer possible.

Among the challenges facing Zahid is the Peel Region banquet halls she has tried to book require payment for at least 100 guests. Yet the total occupancy limit is currently 15 per cent indoors and up to 50 guests in an outdoor setting with physical distancing.

So while the Mississauga native pared down her guest list, she might not realize the expected savings. “We're paying for 100 or 150 people, but, in the end, we’re only allowed whatever the government guidelines allow,” she said.

Whittling away and changing things on the fly has been the theme of the past year for Simmi Prasad, owner of Biji Planners, one of the top South Asian wedding planners in the Greater Toronto Area. Whether it’s trying to ensure everyone is in the right seat or that public health guidelines are being followed, Prasad said discussions around wedding invites are often the most fraught.

“Couples and their parents feel that it's a very difficult conversation to tell people they can’t have you at this event,” said Prasad, who often has to stress the need for patience.

Although public health guidelines have limited wedding sizes, they haven't detracted from the grandeur of smaller gatherings, Prasad noted.

The COVID-19 pandemic has forced South Asian weddings, which can have upwards of 1,000 guests, to shrink. #wedding

“They want it at the level, and it doesn't matter if it's going to be 100 people or 500 people. They're still spending the same amount of money for it to be a lavish affair,” said Prasad.

Part of the expense is a lack of available venues, according to Prasad, as well as the extra measures that wedding vendors must take to work in these precarious times.

Zahid has struggled to book makeup artists and videographers comfortable working in an indoor setting. Even when she finds someone, she knows there is a possibility they’ll drop out because they’ve fallen ill, adding yet another layer of anxiety.

For Zahid, the pandemic means her entire family living in Pakistan is unable to attend, which has been tough to deal with. She’s also missing out on the usual pre-wedding parties and an engagement ceremony. She hasn’t had a bridal shower of any sort.

Usually before the wedding, it’s common for the bride and her mother to return to their ancestral home — either India or Pakistan — to purchase all the small wedding gifts and sort out the bride's clothing. With the spread of COVID-19 now rampant in that part of the world, that trip was a non-starter.

“The cost to travel, come back and then quarantine in a hotel, it’s just too much,” said Zahid.

When it comes to those living here, Zahid admits it has been equally tricky. She has had to exclude a number of close friends and invite some people to one or two events, but not all three. Some of her loved ones have already told Zahid that they’re not comfortable attending her wedding festivities.

Despite their concerns, Prasad noted young couples like 28-year-old Zahid are still opting to get married because they don’t want to continue waiting out the pandemic.

“They’re not willing to put it on hold for another year in their lives. They want to go ahead,” said Prasad.

There is some room for optimism now that Ontarians are being vaccinated in larger numbers. But with the Ontario Hospital Association declaring the beginning of a third wave and experts predicting another lockdown, Zahid’s concerns have shifted to her parents and family elders.

“Their health is a priority. We’re hoping they’re going to get vaccinated soon so it’s one less thing to worry about,” she said.

For those hoping COVID-19 restrictions will loosen up so they can throw a big wedding this year, Prasad is advising them to push it to next year when there’s a better sense of comfort that allows for attending a big, fat South Asian wedding.

“Having that big wedding, it’s just not an option right now.”