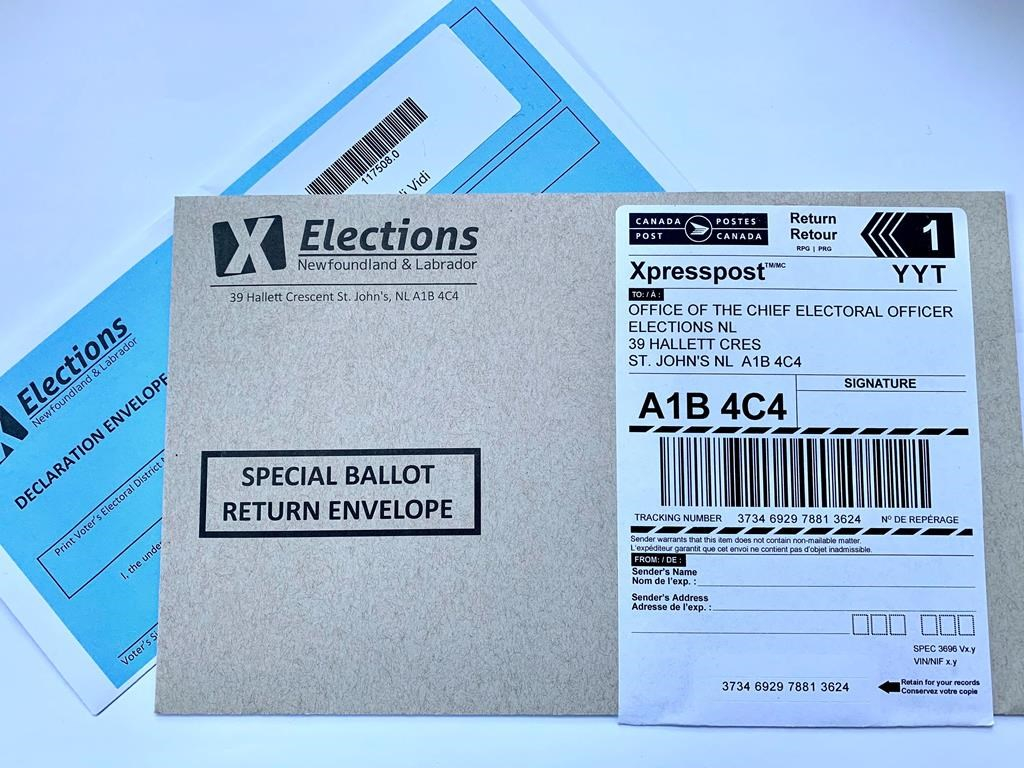 An example of a Newfoundland and Labrador ballot is shown in St.John's, on Monday, March 1, 2021. File photo by The Canadian Press/Sarah Smellie
Previous story

The Newfoundland and Labrador Liberals under leader Andrew Furey have been re-elected with a slim majority after a campaign that dragged on for 10 weeks because of the pandemic.

Results released today from Elections NL show the Liberals with 22 of the province's 40 seats, followed by the Progressive Conservatives, led by Ches Crosbie, with 13 seats. The NDP, led by Alison Coffin, will hold two seats alongside three elected Independents.

Both Crosbie and Coffin were defeated in their St. John's ridings.

In mid-January, with COVID-19 case counts low, Furey called the election for Feb. 13, but an outbreak just before the vote prompted officials to cancel in-person voting and switch to mail-in ballots.

The Liberals had a minority government heading into the election, with 19 seats at dissolution.

Furey is an orthopedic surgeon and a political rookie, but his father, George Furey, is the current Speaker of the Senate in Ottawa.

The province is facing staggering financial challenges, though they largely took a back seat to the drama of a spiralling election that was upended by a COVID-19 outbreak last month.

With a $16.4-billion net debt, Newfoundland and Labrador has the highest net-debt-to-GDP ratio in the country, and its latest budget forecasts a $1.84-billion deficit.

But even before the election was thrown off course, Liberal Leader Andrew Furey steered his campaign away from the dire financial outlook. Instead, he released a series of low-stakes promises, beginning with a pledge to increase community garden grants from $500 to $750.

Crosbie, on the other hand, was unabashed about bringing up the province’s proximity to bankruptcy. During a televised leaders debate on Feb. 3, Furey accused Crosbie of being defeatist by even using the term, and said the Tory leader was "campaigning to be the last premier of Newfoundland and Labrador.”

Crosbie shot back and said he was a straight shooter, and talking of potential bankruptcy bore into the heart of the matter.

Less than a week later, the COVID-19 outbreak began in the St. John’s region. On Feb. 11, chief electoral officer Bruce Chaulk shut down in-person voting in 18 of the province’s 40 ridings as elections staff resigned over fears of contracting the virus.

The next night, public health officials put the province in lockdown, and Chaulk called off voting in the rest of the province. Ballots would instead be cast by mail, he said, and voters had to request them from Elections NL.

After several extensions and controversies, the final deadline to receive ballots was Thursday at 4 p.m. Chaulk had drawn fire after admitting he personally delivered ballots to some candidates in his neighbourhood, and this week Elections NL said Chaulk let four people vote by phone, even though he'd previously said phone voting was illegal.

Ballot request estimates from Elections NL indicate the province could see a historically low voter turnout. Legal experts say the results of the vote could wind up court.

Amanda Bittner, a political science professor at Memorial University in St. John’s, said the election was remarkable for uniting the Progressive Conservatives and NDP -- they both agreed the vote was a mess. The prolonged campaign, which is now one of the longest in modern Canadian history, could have been an opportunity to get more people engaged, she said, pointing to the 78-day federal election in 2015 that saw a jump in voter turnout.

Instead, she said, “we have depressed turnout, disenfranchised tons of voters, and privileged other voters,” she said in an interview before results were released. “And all at the whim of the chief electoral officer, which is absolutely not the way democracy is supposed to be.”

As for Furey, he kept out of the heated debate about the election mechanics but found himself repeatedly defending his decision to call a vote during a global pandemic.

This report by The Canadian Press was first published March 27, 2021.