Descendants of Canada's only all-Black battalion to receive apology 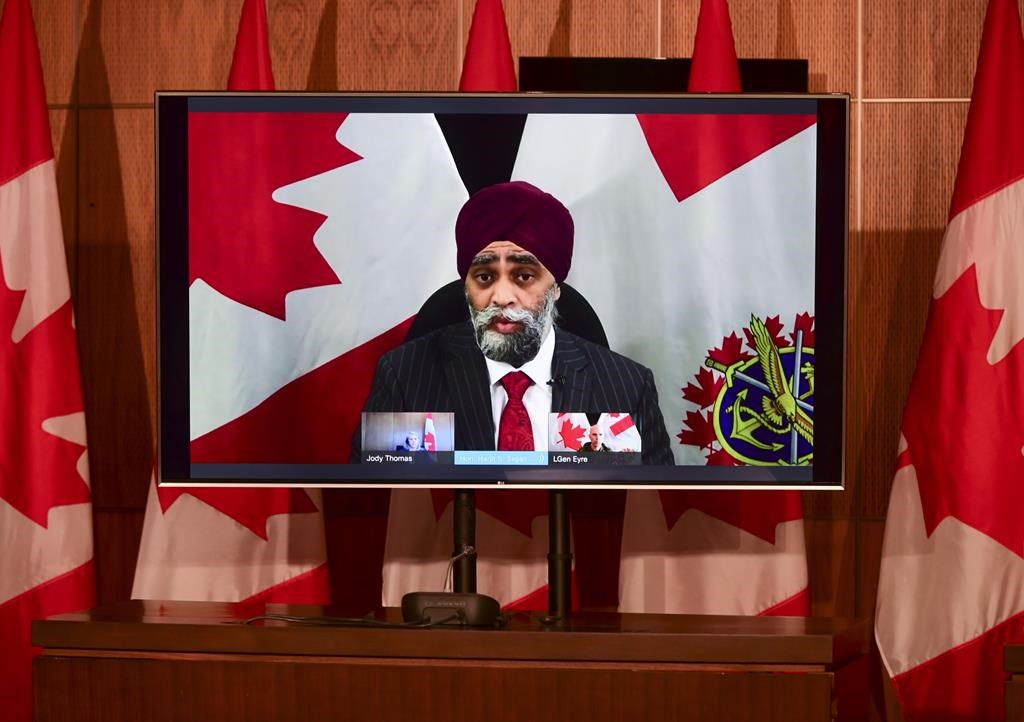 Defence Minister Harjit Sajjan paid tribute Sunday to Canada’s only all-Black unit to serve during the First World War, saying the 600 members of No. 2 Construction Battalion and their descendants are owed an apology for the racism they faced despite their willingness to serve.

Sajjan told a virtual event plans are in the works for a formal apology from Ottawa, which will highlight the fact that hundreds of Black men in Canada were turned away when they volunteered to fight overseas in 1914.

"They stepped forward and volunteered for our country, only to be denied because of the colour of their skin — denied to fight in a so-called 'white-man's war,'" Sajjan said in a brief speech from British Columbia.

After two years of protests, the Canadian military was granted approval in 1916 to establish a segregated, non-combat battalion that would be tasked with building roads, railways and forestry operations as part of the Canadian Expeditionary Force.

"Today, we are deeply grateful for their bravery and resilience in the face of hate and adversity," Sajjan said. "This was critical work that was often overlooked in our history books."

Established July 5, 1916, in Pictou, N.S., the battalion was the last segregated unit in the Canadian military.

Recruitment took place across the country. More than 300 of those who enlisted were from Nova Scotia. Others joined from New Brunswick, Ontario, the West and the United States.

Ruck said the battalion's legacy would have been forgotten, were is not for his father, the late Nova Scotia Sen. Calvin Ruck, who explored the history of the unit in his book "The Black Battalion 1916–1920: Canada’s Best-Kept Military Secret."

#Apology in the works for descendants of Canada's only all-Black battalion: minister #CDNPoli #AntiBlackRacism

In the spring of 1917, the battalion was deployed to Seaford in southern England, and was later sent to Lajoux, France, where it worked in the foothills of the French Alps.

Commanded by Lt.-Col. Daniel Sutherland, a native of River John, N.S., all the unit's 19 officers were white, except one. The unit's chaplain, Capt. William A. White, held the rank of honorary captain, making him the only Black commissioned officer in the Canadian military at that time.

For the most part, the unit supported three major forestry operations in conjunction with Canadian Forestry Corps. Their duties included felling trees, operating lumber mills and maintaining roads, vehicles and railway equipment. At the mills, they produced railway ties, as well as boards and stakes for use in the trenches.

At one point, the unit helped build a narrow-gauge railway from the timber lots to the mills in Lajoux.

"It is a great inspiration because their commitment came in the face of widespread institutional, anti-Black racism," Rankin said. "Deep prejudice in Canadian society made it difficult for Black men who wished to fight for Canada."

In September 1917, the battalion was ordered to move closer to the front lines in northeast France, where the unit continued working in forestry and roadwork operations.

Only a few of its members would see combat, mainly because the battalion was repeatedly told its help wasn't wanted on the front lines.

Members of the unit were shipped home in 1918 and the battalion was disbanded in 1920.