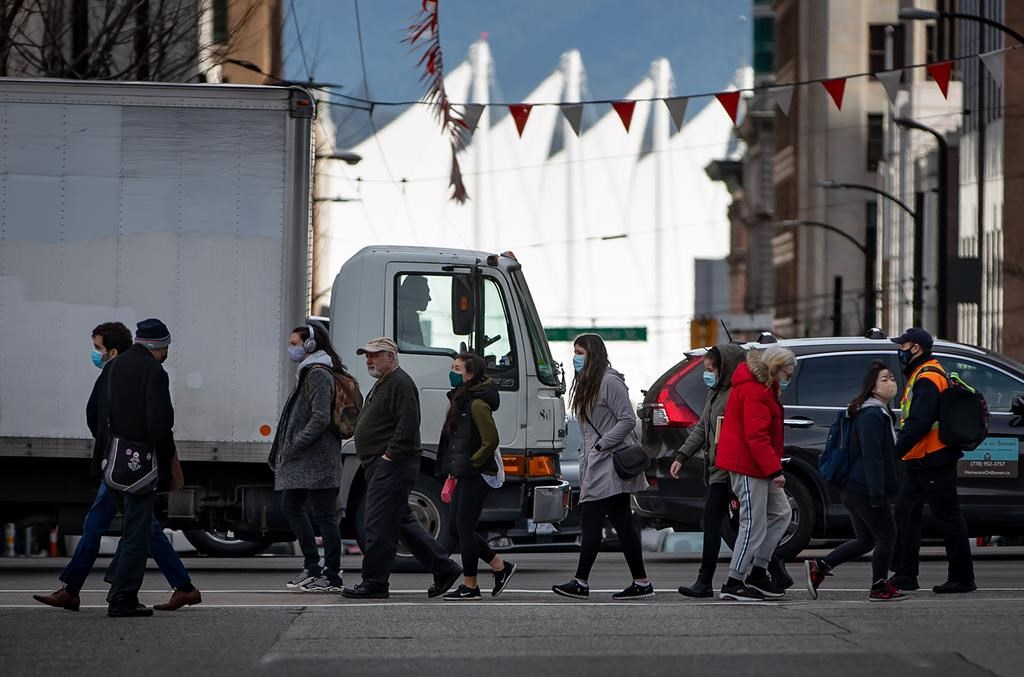 Pedestrians wearing face masks to curb the spread of COVID-19 cross a street in Vancouver, on Monday, March 8, 2021. File photo by The Canadian Press/Darryl Dyck
Previous story
Next story

New research suggests that while Canadians feel COVID-19 will have negative consequences on mental health and the economy, they feel it will be good for online shopping and public mask-wearing once the pandemic is over.

The findings are from a phone survey by the Canadian Hub for Applied and Social Research at the University of Saskatchewan.

It asked about 1,000 people during the first two weeks of March what kind of long-term impacts they thought the health crisis would have on different areas of life.

"Given that vaccinations are now starting to roll out … people are starting to see the light at the end of the tunnel," said research director Jason Disano.

"It seems like a great opportunity to really get a sense of how people are feeling in terms of what life may or may not look like post-COVID."

Specifically, people were asked to imagine a world where COVID-19 was under control, and to pick whether they thought the virus would have a positive or negative effect or no impact at all on a certain category.

Researchers said the survey had a 3.1 per cent margin of error, plus or minus, 19 times out of 20 nationally.

Some of the results weren't surprising, said Disano, like those about mental health and well-being.

About 72 per cent of respondents predicted COVID-19 would have a negative effect, compared to 18 per cent who felt it would be positive.

More than 60 per cent also felt pessimistic about how the pandemic will affect the economy and international travel, while 52 per cent said it would be bad for personal finances.

"No one really knows what the economy is going to look like post-pandemic," said Disano.

He said some of the data he found most interesting were about children's education. Despite 63 per cent of people feeling like the virus will have positive changes on the delivery of online education, 54 per cent thought it would be bad for children's learning.

"I do think there's a bit of concern around -- are the students who are either K-12 or post-secondary, are they going to be behind where they could be or should be, at this point in their educational careers?" said Disano.

On the brighter side, he pointed out that 61 per cent of people thought COVID-19 would be good for the willingness of people to wear masks in public after the pandemic.

"I would assume people, when they were responding to this question, were thinking about things like the influenza virus," said Disano.

The survey also said 76 per cent of people felt the pandemic would be positive for online shopping, and 72 per cent reported the same for alternate workplace arrangements.

Opinions on other topics were more mixed. About 37 per cent of people thought there will be both good and bad changes to domestic travel because of the virus, while 23 per cent said they didn't know.

Overall, Disano said, the research indicates people feel differently about how the pandemic will impact their lives, and there's a lot of uncertainty about what communities will look like once they are no longer threatened by the virus.

"I think there's going to be a degree of onus on policy-makers, on politicians, on public-health officials to provide more information to Canadians in terms of what they see post-pandemic Canada looking like."

This report by The Canadian Press was first published March 29, 2021

Hitting the reset button on the economy post-pandemic

By Ryan Merkley | Opinion | May 6th 2020
Coronavirus in Canada