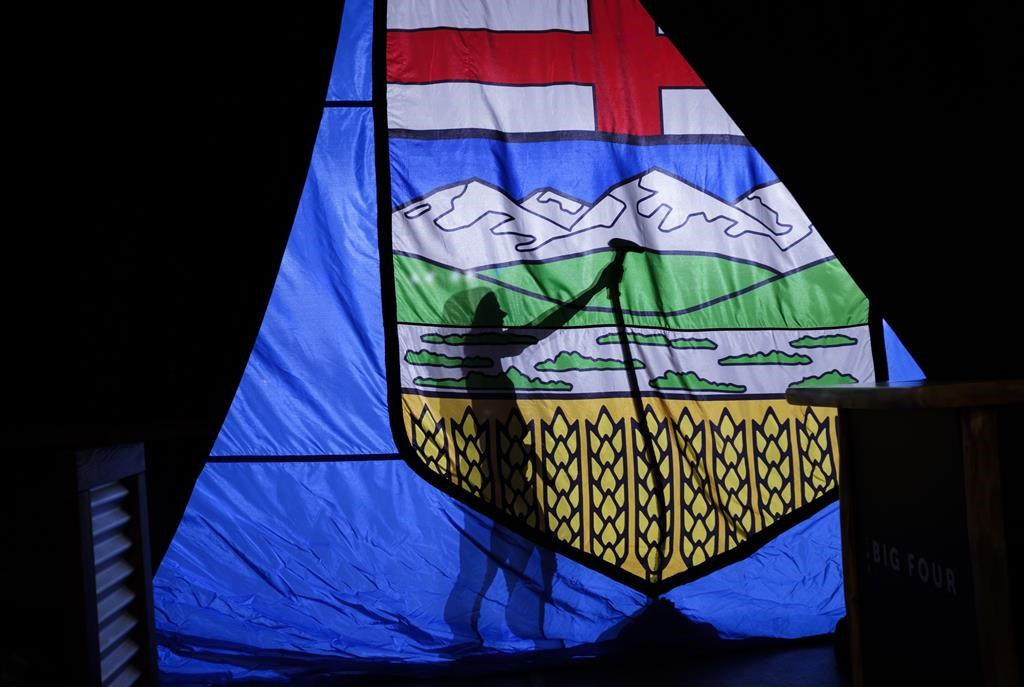 A campaign worker steams the wrinkles from a large Alberta flag at an event venue in Calgary, Alta., on Tuesday, April 16, 2019. File photo by The Canadian Press/Jeff McIntosh
Previous story
Next story

The posting for a new high-level Alberta government job supposed to help the province align with environmental concerns from financial markets seems more about talk than action, observers say.

"My impression is that it is about communicating," said Olaf Weber, the University of Waterloo's Research Chair in Sustainable Finance.

"The Alberta government does a lot of communication — not really addressing the problem, but changing the conversation."

The United Conservative government has recently posted an opening for an assistant deputy minister with the Environmental, Social, and Governance Secretariat.

The job — which pays up to $200,000 — would report to executive council, headed by Premier Jason Kenney.

The posted description says the job would be "developing communication and engagement plans focused on key audiences, building strategic communications materials to support the implementation of the plan, and coordinating implementation."

"It is a lot of setting benchmarks in order to compare different investments," she said. "The aim of ESG is to ensure that environmental, social and governance side of things that are typically harder to measure aren't completely left behind."

Such benchmarks are often referred to as non-financial disclosures. They're intended to help investors evaluate hard-to-quantify risks such as climate change regulation, social unrest or government corruption — as well as provide ethical guidance.

The government posting doesn't mention improving performance or helping companies set benchmarks. It seems to suggest the job would point out what the province already does.

"(The job) will contribute to the development of a competitive environment for Alberta businesses through effective communications on Alberta’s standing in the world on ESG criteria," it says.

The job would focus on both long- and short-term objectives.

"The Strategy Directorate leads the development and implementation of strategies and plans to define and reach different target audiences, including content curation," it says.

The job will include "the development of cross-ministry policies related to climate, energy and innovation."

But a more typical ESG job would focus on advising the organization on ways to improve, Weber said.

"If you talk to banks and others, they are aware they have to work on ESG," he said. "But they wouldn't say it's mainly communication."

"(This job) is called the ESG secretariat, but definitely seems extremely communications-focused."

Asked how the ESG secretariat would differ from the Canadian Energy Centre — the government's so-called "war room" combating perceived misinformation about Alberta's energy industry — a spokeswoman for Kenney said the office would work with other government departments.

"ESG is a financial metric that applies to a number of sectors in Alberta across various ministries," Jerrica Goodwin said in an email. "The secretariat is being formed to co-ordinate all of Alberta's policy and advocacy efforts across government."

The Canadian Association of Petroleum Producers said it supports the government's ESG secretariat.

"We have been a vocal promoter of the strong ESG performance demonstrated by Canada's natural gas and oil industry and welcome a greater focus on (its) high standards," president Tim McMillan said in an email.

"There is an opportunity to help tell the story of how our country produces some of the world's most reliable, affordable and responsibly produced energy."

Weber said this is the only provincial ESG position in Canada focused on industry that he's aware of. He wonders why it's needed.

"I find it interesting that the government sets up a position that communicates ESG for companies working in the province," he said. "The oil industry can do that on its own."

Alberta has no carbon tax Plan B, was hoping to win in court: Kenney

By Dean Bennett | News, Politics | March 17th 2021
Reports from the Race to a Safer World