Liberals defy Tory demand that PM testify on WE deal 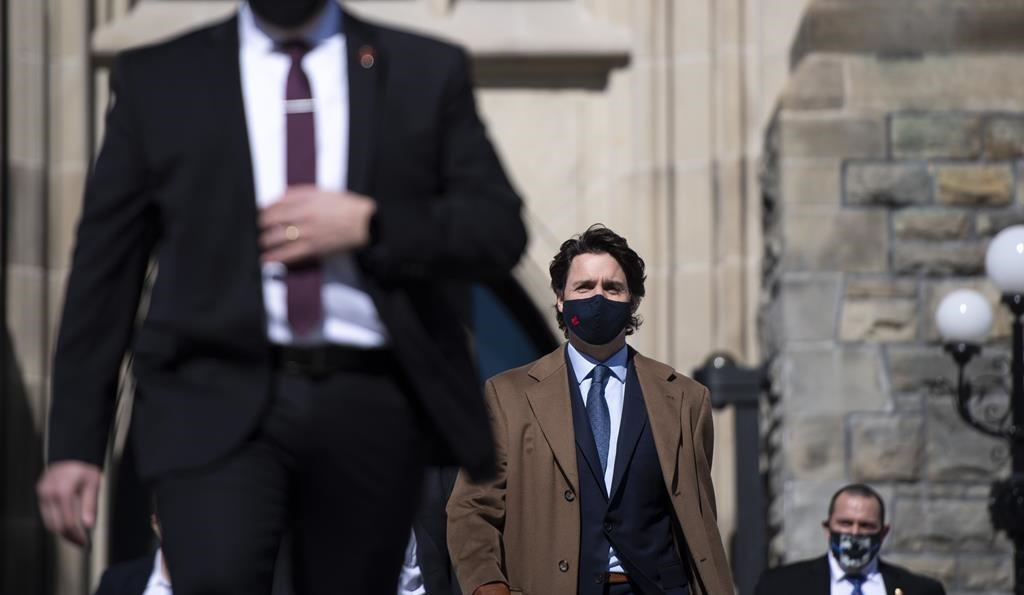 Prime Minister Justin Trudeau leaves West Block on Parliament Hill to participate in a news conference on the COVID-19 pandemic in Ottawa, on Friday, March 12, 2021. File photo by The Canadian Press/Justin Tang
Previous story
Next story

The conditions for a brawl appear to be set after Government House Leader Pablo Rodriguez announced that he will testify at a parliamentary committee about the now-dead WE deal on Monday, rather than Prime Minister Justin Trudeau or members of his staff.

In a letter to the chair of the House of Commons ethics committee on Sunday, Rodriguez said that one of Trudeau's senior advisers had been instructed not to appear before the committee — and that he will be attending in his place.

"Staff are not elected members of the House, they do not have the same rights and privileges as MPs. Calling staff to testify at committee is at odds with the long-standing principle of ministerial responsibility," Rodriguez said in a letter to committee chair Chris Warkentin.

"Accordingly, Mr. Rick Theis, director of policy to the prime minister, has been instructed to not appear before the committee. In his place, I will attend the meeting on behalf of the government."

The letter represents the latest round of bickering between opposition parties and the Liberals over a Conservative-sponsored motion passed by the House of Commons last week calling for Theis and other members of Trudeau's staff to testify before the committee.

The motion also called Defence Minister Harjit Sajjan's former chief of staff to appear at the defence committee to shed light on how the Liberals handled sexual misconduct allegations against the previous commander of the Canadian Armed Forces, Gen. Jonathan Vance.

Rodriguez had indicated on Friday that the Liberals would ignore the motion, accusing the Conservatives of trying to intimidate political staff and arguing that ministers are ultimately responsible for those who work for them.

The motion, passed with support from opposition parties, had indicated that Trudeau's staff could ignore the request to appear if the prime minister himself attended.

Hours before Rodriguez sent his letter to Warkentin, Conservative MPs Pierre Poilievre and Michael Barrett said if Trudeau's staff would not appear to answer the ethics committee's questions, then the prime minister himself must appear.

"If Trudeau staffers can't testify, then he can," Poilievre said during a news conference on Parliament Hill.

"We ask him to testify for no less than four hours before the ethics committee in person. ...He can answer why his staff were engaged in a long string of correspondence with the WE brothers about setting up programs and grants of taxpayer money."

Poilievre and Barrett did not say what measures opposition parties could or would take if the Liberals ignore the motion, and instead painted the issue as one of honouring the will of Parliament.

Barrett later blasted Rodriguez's plan to attend the committee meeting instead, noting that the motion passed by a majority of MPs in Parliament specifically named Trudeau and his staff.

"Nowhere does it include any reference to the government House leader," he added.

"For over a week, the Liberals have used the excuse that ministers should testify before the committee. The key players in Trudeau's WE scandal work for the prime minister, not the government House Leader."

Rodriguez's spokesman Mark Kennedy defended the government's decision to have the House leader appear instead of the prime minister.

"It was the government House leader that led the government's response last week to the Opposition motion to force staff members to appear at committee," Kennedy said in an email.

"He will represent the government at the ethics committee tomorrow. Ministers have collective responsibility for the actions of those throughout government."

While prime ministers don't usually testify before committees, Trudeau did appear at the finance committee in July to answer questions about his government's decision last year to have WE run a multimillion-dollar student volunteer program.

WE later backed out of the $543-million agreement following questions and concerns about its close ties to members of the prime minister's family, before the Canada Student Services Grant program was cancelled entirely.

The Liberals and WE co-founders Craig and Marc Kielburger have insisted that it was non-partisan civil servants who came up with the idea of having the Toronto-based organization run the grant program.

But the Conservatives have held up some of the thousands of email exchanges and other documents released by the government in August, after Trudeau testified, as evidence the arrangement was directed by the Liberals.

Those include a message from Craig Kielburger in which the younger Kielburger brother appears to thank one of Trudeau's senior advisers, Ben Chin, for having helped shape the student-grant program.

Craig Kielburger told the ethics committee two weeks ago that Chin had no direct involvement, and the message was one of dozens an assistant sent as Kielburger sought to expand his LinkedIn network. Chin is one of those the Conservatives want to testify before the committee.

Trudeau to testify today on WE Charity controversy

I've never voted Liberal nor likely to in the future. That said, I've moved on from the WE issue and want the opposition to focus on structural issues: economic supports for women and BAME in the restart of a more green economy, serious LTRC reform, pharmacare, and real implementation of UNDRIP, and publicly owned vaccine research institutes. The ongoing process and systemic issues of racism and sexism in public institutions also need serious attention. The list of real issues is long enough without adding political fluff-of-the-day.