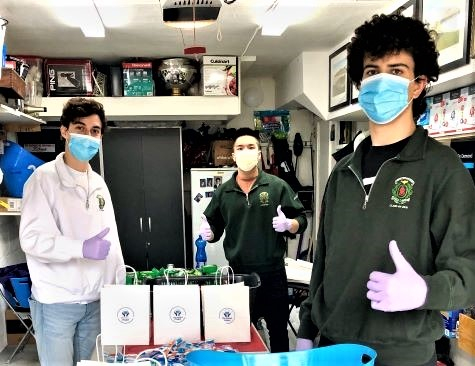 Jack Tomé, Nathan Lee, and Alex Mastromarini worked out of Tomé's garage to create the baskets of personal protective equipment they would be handing out to the city's homeless population. Photo submitted by The Basket Project
Previous story
Next story

When the COVID-19 pandemic hit, colleges shuttered their campuses and offices shut down in-person operations, all of which resulted in lost opportunities for university students aiming to get ahead.

The lack of interaction and missed opportunity fuelled a trio of Toronto teenagers to shift their focus to what they could do for the city’s most vulnerable population.

Through The Basket Project, Jack Tomé, Alex Mastromarini and Nathan Lee created bundles they handed out to the city’s homeless population. The care packages were filled with sanitary essentials, ranging from gloves, wipes and face masks.

“There’s always a necessity to help vulnerable people regardless of the virus. We need to not forget about marginalized communities,” said Tomé.

The friends, who have known one another for over a decade, all attended De La Salle College Oaklands in Toronto, where they routinely volunteered to help the city’s homeless population.

Mastromarini said they understood the community's pre-existing vulnerabilities and knew the addition of the virus into the ecosystem would likely make them even more at risk due to their often communal living spaces. “Everyone kept saying, 'Stay at home, stay safe,' but we knew that’s not a reality for everyone.”

The three realized the work they were doing was important when they set out to make a donation and provide personal protective equipment to the Good Shepherd Ministries in Toronto. There they came across a priest with a terminal respiratory illness who, despite a virus that could kill him floating around, was continuing to help people in tougher circumstances.

“Understanding his passions and seeing his work first-hand, it was indispensable and became a driving force for our mission,” said Mastromarini.

The Basket Project started off as a small drive to get people involved, but turned into something much bigger as they surpassed their initial goal of $1,000 and 100 baskets on the first day. By the end of their first week of operation, the project had raised over $5,000 and created more than 350 baskets.

“We never really imagined or expected the growth,” said Tomé.

Their support didn’t come only from Toronto; shortly after they began, the group was contacted by dozens of young people from across the country who wanted to get involved. Some set up chapter organizations in their own cities and towns.

“We started to get a lot of outreach from different cities, random strangers, and they ended up joining us to help their own neighbourhoods,” said Mastromarini, who said there are now chapters in Hamilton, Oshawa, Windsor, and even Vancouver.

Following their original push to help homeless people, The Basket Project has carried on for a year, raising over $25,000 and organizing 1,000 baskets for those in need. Tomé and Mastromarini, both business students at Western University, are not surprised their efforts have been replicated by others their age.

“I think we're an impact-oriented generation. We all grew up in a connected world, we’ve always seen the impact of other’s actions,” said Mastromarini.

Mastromarini, Tomé and Lee are still at school and are continuing to study while managing The Basket Project. Despite their busy schedules, they plan to keep the project going.

“We care, we’re driven to see this through and to get support from the community, it makes overcoming obstacles easier. We want to help,” said Mastromarini.