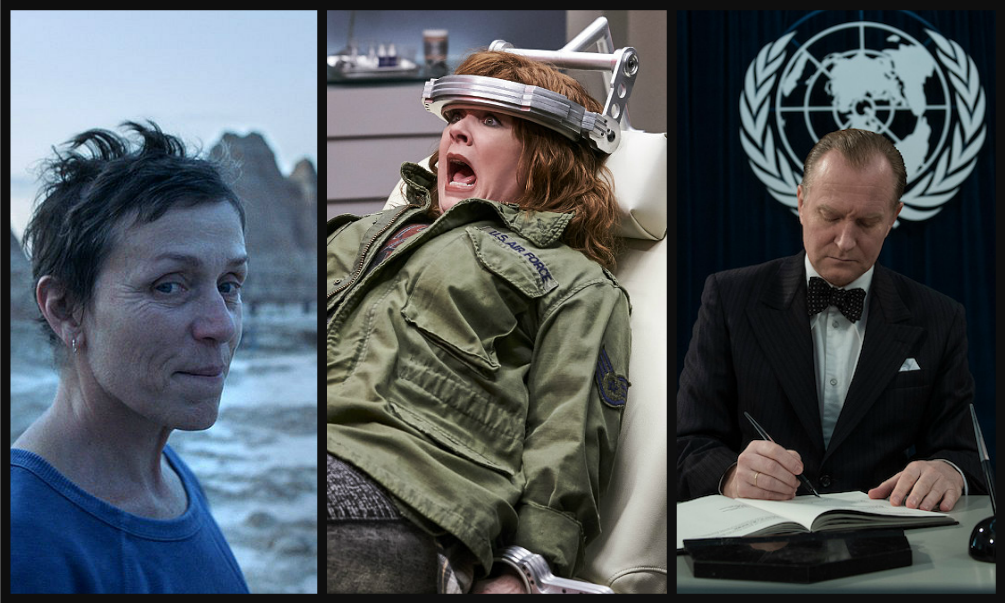 Also: Oscar-worthy shorts, sex abuse in sports, gays in the army, and a marriage fix.
Previous story
Next story

This week and next are particularly big for new movies. It happens that way now and then. Studios all release at the same time. This week, we’ve got several Academy Award prospects, including the long-awaited Nomadland, and quite a few others. Both good and just so-so.

NOMADLAND: What a long trip. Way back in September, it was the “people’s choice” at the Toronto film festival. Since then, it has been written about almost every week, won over 200 awards (including Golden Globes) and received six Academy Award nominations. (It’s often cited as the front-runner). So, finally it’s here — in a very few theatres that are actually open and streaming on Disney+. It has been worth the wait. This is a gentle, must-see film. It starts with images of a grim America and ultimately celebrates what used to be great about the country: The people and the land. Frances McDormand travels through it in her RV. 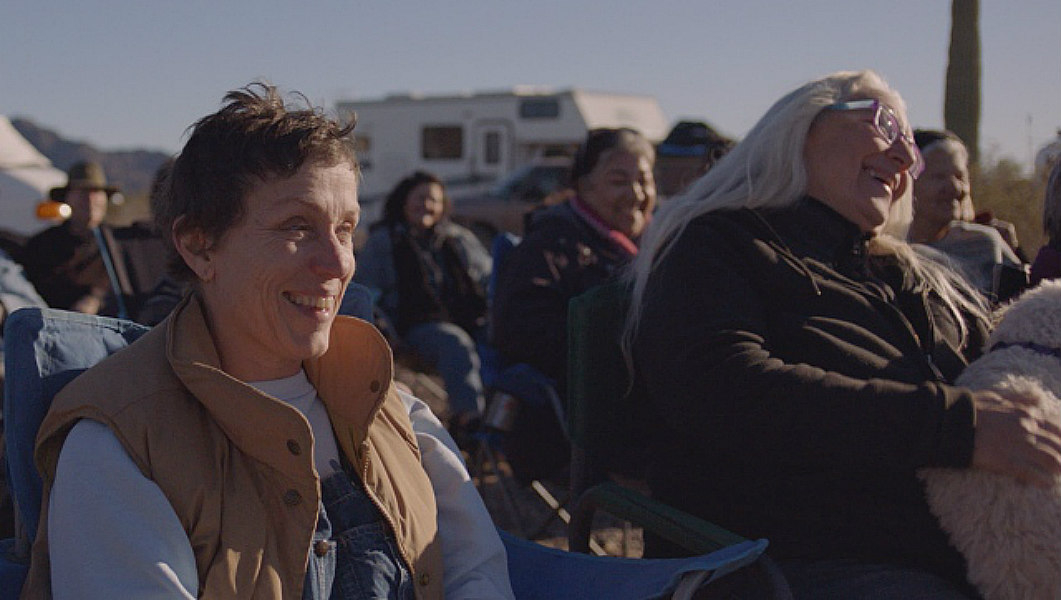 Her character lost her future when a gypsum plant shut down in Nevada, and she became a nomad. Out travelling in her camper, she finds a whole subculture of people like her. They live off the grid, park in Walmart lots or just anywhere (“stealth parking”), and pick up occasional work from Amazon or others. At night, they share stories or songs around a campfire. It’s real and was documented in a book by Jessica Bruder, which Chloé Zhao drew on to write and direct the film. A few of these real nomads are in the film providing authenticity, advice and mentorship. David Strathairn, one of the few known actors, is a nomad McDormand encounters a few times and accompanies to visit his family. There’s not much plot, but a great deal of situation-building. She’s not defeated by economic collapse (“houseless, not homeless”). McDormand is a fine exponent of what the film is about: Resilience and humanity. (Disney+) 4½ out of 5

OSCAR-NOMINATED SHORTS: These are always a treat to watch because they’re economical, imaginative and sometimes experimental. They are so again, at least from two of the three categories I’ve seen so far. They’re all streaming until April 29 at VIFF Connect, so I’ve got time to catch up to the last one: documentary shorts.

LIVE ACTION SHORTS: Oscar Isaac stars in one, The Letter Room, but two others impressed me the most. Two Distant Strangers uses a movie trope that has become familiar these days to dissect the ongoing debate, anxiety for many, about white cops versus Black men. The film references George Floyd and many others, and is extremely imaginative in making its points. Meanwhile, The Present is sharp, emotional and eventually optimistic in showing the humiliation a Palestinian man and his daughter are subjected to at an Israeli border checkpoint.

ANIMATED SHORTS: Diana Rigg narrates and Rob Brydon and Sally Hawkins are two voices in the half-hour adaptation of the popular children’s book The Snail and the Whale. It’s colourful, plush with rhymes, and magical with wonder and discovery.

Oddly, it’s not a contender, but a near-miss added to this program to bring it to length. Among the five real candidates you’ll find several playing with colour, drawing styles and story forms to push out of the usual. Genius Loci from France is about chaos, and If Anything Happens I Love You, from the U.S., builds to a stunning conclusion. (VIFF Connect)

QUO VADIS, AIDA?: This is also an Oscar nominee, so I’ll include it now even though it doesn’t start until Tuesday. It’s from Bosnia and competing in the international category where it’s up against the masterful documentary Collective. But it is harrowing and so powerful that it might have a chance. (Incidentally, both films are streaming right now at VIFF Connect.)

It’s 1995. The former Yugoslavia is in a civil war after Bosnia and Croatia split away and Serbia is fighting to get them back. The film is about the massacre in the mountain town of Srebrenica, where some 8,300 men were shot and dumped into a mass grave. The focus isn’t so much on that horror, but on the fear, panic and negotiation that preceded it. The United Nations “issued an ultimatum.” The Dutch peacekeepers closed the gates to an army base because there was no more room for refugees. A Serb general, Ratko Mladić, later convicted of war crimes, and played here by Boris Isakovic, was the controlling power against an ineffective UN man at meetings. Aida, played by Jasna Djuricic, is a translator who sees what’s going on and is about to happen, but isn’t listened to. The film builds tension and then frantic scenes of terror, escape attempts and searching for a lost son. The director, Jasmila Zbanic, is from there and her film feels authentic and very moving. (VIFF Connect) 4 out of 5

SLALOM: Sex in the military these days; in sports at other times. The stories come and go and this film fits right in. A young elite skier and her coach get into a thing, and how does that happen and who is to blame? Director Charlène Favier explores in Val d'Isère, France, where she grew up, and with experiences from her own life. She doesn’t explain what they were, but she clearly knows what she has seen. Lyz, a teenage prodigy in the slalom (Noée Abita), is trained by a coach played by Jérémie Renier, who you’ll recognize from films by the Dardenne brothers from Belgium.

She has talent, but no experience. He takes a chance on her, becomes her friend and confidant, even to the point of advising her on how to deal with menstruation. “Periods are beautiful. They follow the moon. They’re cosmic,” he says. Her ambition and his empathy make her go along with him, and things get sexual. Favier carefully and subtly charts that progression. She shows Lyz as too naïve to stop it and at the same time reveals what motivates the coach. He has the power, and therefore, is at fault, but the film doesn’t blast that charge. It’s more effective this way. (Streaming at thecinematheque.ca) 4 out of 5

THUNDER FORCE: Melissa McCarthy, I can understand seeing her in a genre comedy like this. She has made a habit of them, along with her husband Ben Falcone, who writes and directs. But Octavia Spencer. She’s an Oscar winner (and two other times, a nominee). She seems to be more serious as an actor. Both women have a great time, though, in this silly send-up of superhero movies. The problem is with the material: It’s not funny, satirical or even absurd enough. Accept that and you’ll probably find it fun.

They were childhood friends, and now as adults, they become crime fighters with superpowers. Melissa is strong; she can lift and even throw a bus. She does just that, in good time. Octavia, the scientific brain in the duo, developed the treatment and a second one she gives to herself: Invisibility at will. It all comes in good time because for years, there have been “miscreants” about. They rob stores and even steal elections, as one who nicknames himself “The King” (Bobby Cannavale) does. Jason Bateman works with him. He’s called The Crab because ever since swimming in a nuclear contaminated pool, he has grown large claws like a crab. He’s not good with a wine glass because of it. The silliness just piles up, along with a few good lines to laugh at, and committed performances by the actors. Not in aid of much, though. (Netflix) 2½ out of 5

THE GOOD TRAITOR: The best thing about this Danish film is that I got to learn this piece of history. And also: The screen presence of the lead actor, Ulrich Thomsen. Among his many films, we know him best from two by Thomas Vinterberg and one about James Bond. He perfectly embodies the image of a diplomat here as Henrik Kauffmann, Denmark’s ambassador to Washington in 1940. He’s a party-giver and a worrier.

Hitler has invaded his country, the government isn’t resisting (I didn’t know that) and he is outraged. He won’t just do as he's told, though. He wants to declare his embassy independent, in effect the real Danish government. Roosevelt won’t help because Americans, he says, don’t want to get involved in another European war. Pearl Harbor changes that. Churchill gets into it, too, and Kauffmann manages to trade access to Greenland for American support. The politics are fascinating. Less so is a side story about Kaufmann, his wife and her sister. It seems unnecessary until a shocking conclusion. Director and co-writer Christina Rosendahl tells a true story straight and well. (Available digitally VOD starting Tuesday.) 3½ out of 5

MOFFIE: That’s a derogatory term in South Africa for effeminate or queer boys. Considering that, I’d have thought this would be more of a gay story. It’s there, but subtly, a lot of yearning and glancing; not a lot of touching or the antithesis: putting down and slagging. Director Oliver Hermanus, who also co-wrote this, intended it as a criticism of the way boys like that were treated back home, back then (the early 1980s), but that comes out too quietly. Up front it is a war movie; South Africa fighting off “the Communist threat” at the border with Angola. Boys from age 16 are drafted, trained harshly and sent out to fight for the survival of the nation and the white race.

Kai Luke Brummer plays the main young man we’re watching. He’s new to acting, as are most of the boys here. Hilton Pelser, though, is a tough and abusive sergeant straight out of other training-for-war movies. You don’t want to hear what he says right to your face. And with that, the film does fulfill the director’s other main intention: To show the toxic code of masculinity the military brings to young men. There is a mild love story and an old incident as a boy remembered, but, for me at least, they’re not the central story here. They add context to it. (For rent on AppleTV now and available this summer on the Amazon Prime Video add-on IFC Films Unlimited.) 3½ out of 5

HELD: A couple try to spice up their dull marriage by renting a country house for a romantic weekend. That’s what it looks like, but things are a bit off. She arrives first, hears noises, sees a dark figure skulking about, finds flowers for her on the porch. He arrives, says he didn’t send those flowers and gets phone calls with instructions about how to conduct himself. And ominously this: “If you obey, we will let you go.”

What’s going on is explained much later. It would be a spoiler here. All I’ll say is it feels way too exaggerated and improbable. Orders keep coming from the voice on how to treat each other on this their anniversary. The voice even seems to see what they’re doing and orders changes in how they behave. There’s a very effective creepy ambience built up as they seem to be under somebody’s control. That causes the pair to argue about old incidents in their past, and where that leads is also over the top. Enough said. She is played by Jill Awbrey, who also wrote the script. He is played by Bart Johnson and their story is about male-female roles. Travis Cluff and Chris Lofing directed, well enough, considering the dubious story. (Rent or buy on the Apple TV/iTunes app and other VOD platforms.) 2½ out of 5