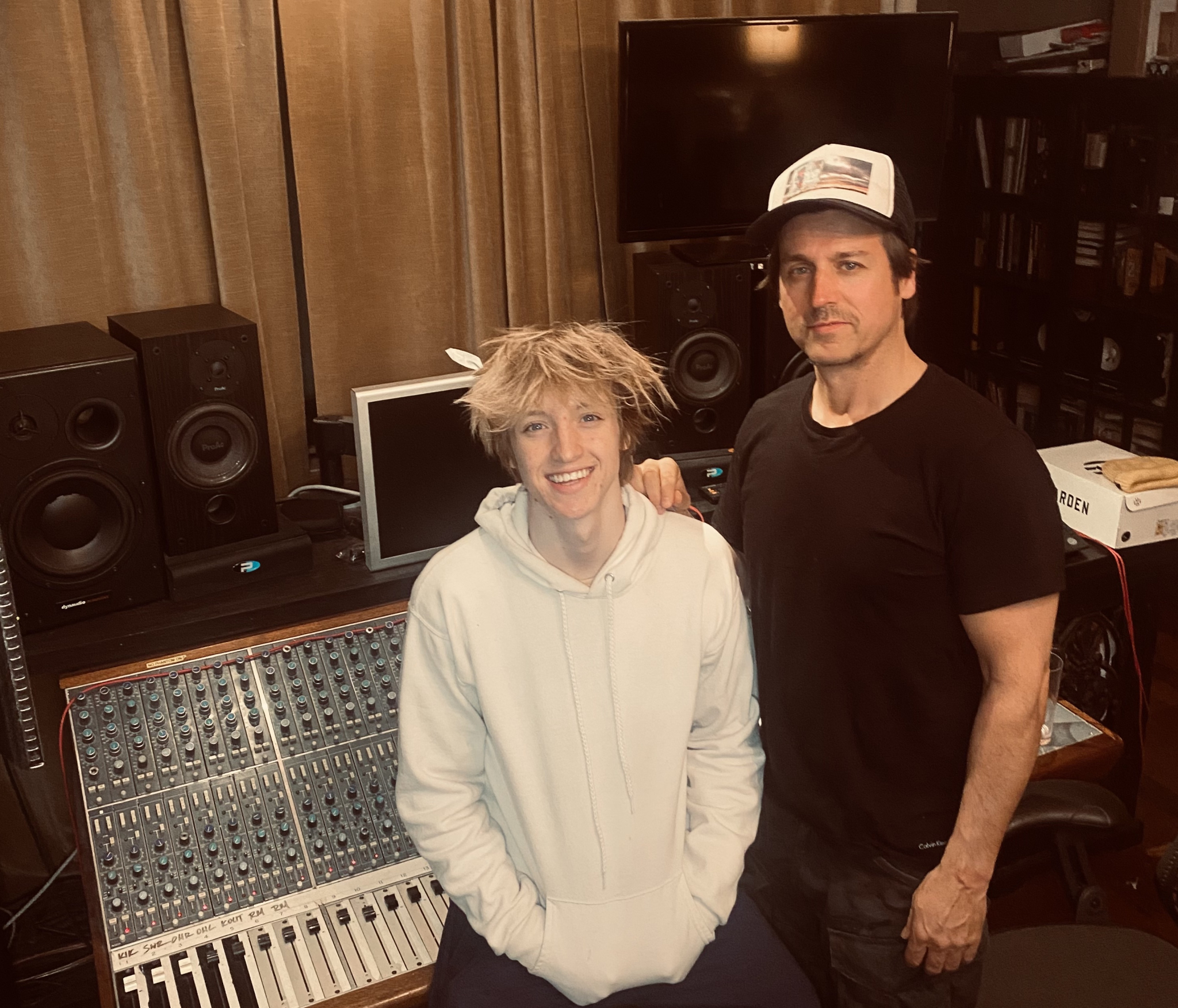 Rowan and Raine Maida have been recording music in their home studio and storing it as NFTs in a blockchain app Raine Maida is involved in developing. Photo by Chantal Kreviazuk
Previous story
Next story

The young creatives who post choreographed dance moves and other performances on TikTok are sharing content at an exponential rate compared to artists of prior generations, and the Maidas want to make sure they can get paid for their original work.

“Kids don't realize you send one of your voice memos and someone can just go and steal that now,” said Rowan Maida, the 17-year-old son of singer/songwriter Raine Maida from Toronto alt-rock band Our Lady Peace and Chantal Kreviazuk, also a singer/songwriter whose work has appeared on numerous soundtracks.

The COVID-19 pandemic has only fuelled the explosion of social media, where musicians, photographers and other artists record and upload riffs and verses and portfolio pieces constantly, sharing and responding to peers and fans in a cultural free-for-all.

Raine and Rowan — a budding musician and promising basketball player who has found some traction with his own TikTok profile featuring him playing piano and singing with Kreviazuk, jamming a duet with another user and other teenage slice-of-life content — say they know first-hand about stolen ideas.

His wife "was asked to write the end title for La La Land, and they didn't end up using her song, but the hook of her song got stolen and put in this big insurance commercial down here,” Raine Maida said during a recent video interview with his son.

The family is currently in Los Angeles, unable to commute to a second home in Toronto’s St. Lawrence Market neighbourhood since the pandemic made cross-border travel difficult.

They had been going back through texts and emails to try to work out how it got there when he was approached by the two founders of a company who had built a platform to protect the work of inventors.

So now whenever Rowan is messing about with a song or doing other creative work, he’ll save it to S!NG, an app the company of the same name built after Raine joined as chief product officer last August.

S!NG creates NFTs and stores them in a blockchain wallet it launched on Apple’s store in February. In the next couple of weeks, the company is planning to add a marketplace.

An NFT, or non-fungible token, is the sign of ownership of a unique digital asset, such as images, video clips or tweets, stored on a blockchain. (Blockchain, broadly speaking, refers to the growing list of records stored in blocks linked in cryptographic and chronological chains by various decentralized networks.) NFTs can be traded, but are not mutually interchangeable, or fungible, unlike cryptocurrencies and other utility tokens.

“This is just going on every day, it's exponential, so we got to give the kids a simple way to protect this stuff,” says Raine Maida of @OurLadyPeace.

The technology has given rise to a frenzied market for digital art, ephemera and media, with the first NFT sold by a top auction house going for more than US$69 million last month.

“Stuff is just flying around, and we need to get a hold of it for creators like myself and my wife Chantal, but also for the next gen who are even more prolific and probably create at like 20 or 30 times what I do because they do it more for followers and clout, they do it effortlessly,” Raine Maida said.

"Now you can go through it and be like, 'Hey, I really dig this idea, let me see.' Maybe it's a beat, maybe it's a hook, see if somebody wants to buy it," Raine said, recalling that Rowan recently showed him the TikTok work of Thomas Lang, a virtuoso guitarist.

“He sang this sick hook and a crazy lyric, and it was like, ‘Dude, can you reach out to that kid who owns this song?’” he said, noting 300 other young people had reacted to his work with their own versions.

“I mean some of them are terrible, but some of them were good,” he added. “This is just going on every day, it's exponential, so we got to give the kids a simple way to protect this stuff.”

From the little I understand

From the little I understand about blockchain technology and its application to "Cryptocurrency scams" and the securing of illegal and deadly money circulating around the globe - this is the first instance I have come across that seems to be honestly productive. I hope it is not corrupted by the greedy and unscrupulous music "industry".

Fear not and know that

Fear not and know that blockchain tech and cryptocurrencies will rapidly and relentlessly make their way into our lives. The journey and living conditions of the produce in our salad will be recorded and stored on a blockchain. The registries of land ownership and transfers are going onto blockchains. The applications are so, so many. Our votes will go onto blockchains (hey no more hanging chads!).
Blockchain concepts and cryptocurrencies will help and permit truer democracy. I think that is a good thing.