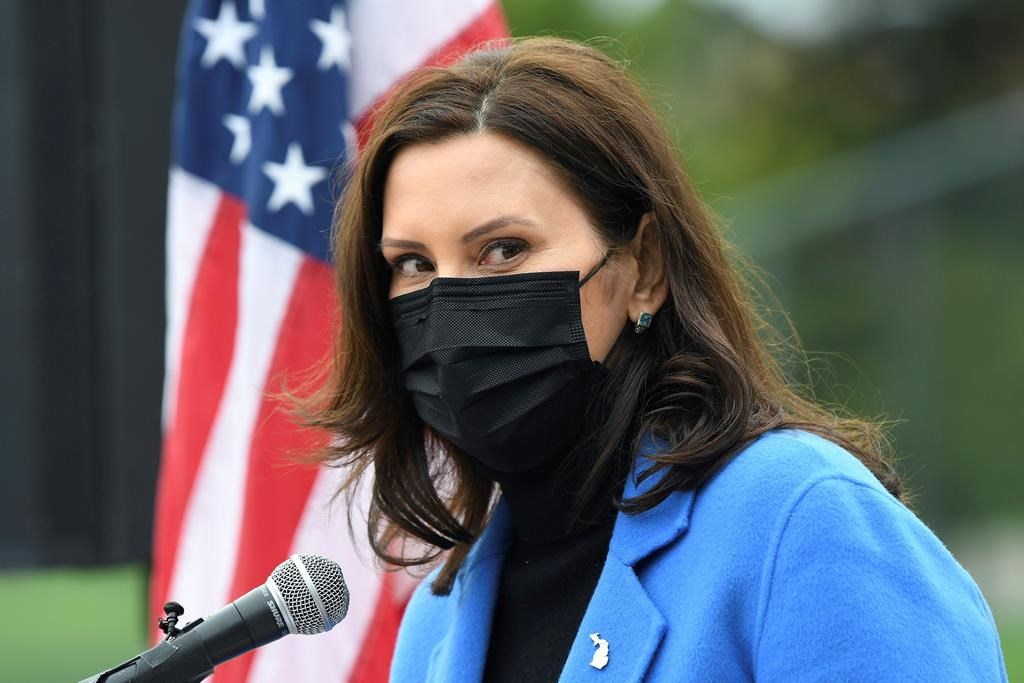 WASHINGTON — The federal Liberal government is putting Canada's oil and gas industry ahead of the Great Lakes by opposing Michigan's efforts to shut down the Line 5 pipeline, says a prominent group of Ontario First Nations.

The Anishinabek Nation said Thursday it is disappointed that Ottawa is pushing back against Michigan Gov. Gretchen Whitmer's order that Enbridge Inc. stop operating the cross-border pipeline next week.

The federal government is considering taking action under the 1977 Transit Pipelines Treaty with the United States that allows for the uninterrupted flow of energy between the two countries.

And yet it is willing to ignore the treaties Canada has signed with the 39 First Nations in Ontario that are represented by Anishinabek, said Grand Council Chief Glen Hare.

"It is upsetting to see that the government of Canada will pick and choose which treaties to uphold based on convenience and profit," Hare said in a statement.

"Should anything that's being transported in these 67-year-old pipelines get into the Great Lakes, it would have devastating effects and irreparable consequences."

But so too would shutting down the pipeline, Liberal, New Democrat and Conservative MPs alike agreed Thursday during an emergency debate on what both the government and the official Opposition consider a potential economic and diplomatic crisis.

There was little disagreement over the importance of the pipeline, which ferries Alberta crude and natural gas through Michigan and beneath the Great Lakes waterway known as the Straits of Mackinac to refineries in Sarnia, Ont., and beyond.

It delivers more than half of the crude oil used in Ontario and 66 per cent of what gets consumed in Quebec, and provides vital home heating oil and propane throughout Michigan and Ohio.

The operation supports 5,000 direct jobs in Sarnia and some 23,000 adjacent jobs throughout the region in both countries, to say nothing of oilpatch workers in Alberta and Saskatchewan.

The MPs didn't see eye to eye, however, on where the blame should lie.

Conservative Leader Erin O'Toole accused the government of dragging its heels and neglecting the needs of Canadian energy workers and producers, particularly those in Alberta.

"This Liberal government has failed to work effectively with the U.S. administration, and they failed to stand up for the Canadian energy supply chain. They don't seem to care," O'Toole said.

"The prime minister needs to value the things we produce in Canada, the things people do — getting their hands dirty to build things."

Natural Resources Minister Seamus O'Regan pushed back hard against O'Toole's assertions, accusing him of playing political games on the backs of oilpatch employees.

"We have been clear from the start — we would leave no stone unturned in defending Canada's energy security," O'Regan said.

Shutting down Line 5 would result in an additional 800 tanker cars and 2,000 trucks a day shipping oil and gas along the railways and highways throughout both countries, O'Regan said, creating a higher risk of spillage and unnecessary greenhouse gas emissions — much of it in Michigan as trucks clog busy border crossings.

"The protection of the environment of the Great Lakes is of vital importance; I don't think anybody in the House disagrees with that," O'Regan said.

Michigan has already issued several permits for Enbridge's $500-million tunnel project, which would encase the twin pipelines in an underground tunnel to mitigate the risk of leaks and protect them from anchor strikes, he added.

"The reality of the situation is that Line 5 is safe. It's been safe for 65 years, operating in the Straits of Mackinac without incident. And Enbridge is committed to making a safe line even safer."

Michigan and Enbridge are engaged in court-ordered negotiations and scheduled to meet for a third time on May 18 — six days after Whitmer's Wednesday deadline for shutting down the line.

O'Regan said Canada still has several legal options, including making a claim to the U.S. under the 1977 treaty and joining the court case by filing an amicus brief.

A decision on whether to get involved in the court case is likely by early next week.

This report by The Canadian Press was first published May 6, 2021.

you quote Enbridge as saying

you quote Enbridge as saying the line is safe. The company that brought us Kalamazoo epic spilll, that violates maintenance of the pipelines constantly, that has had its current line on the lakebed hooked and damaged by freighters, that is gambling the drinking water safety of 50 millions people around the edges of the 5 lakes.
But you don't quote any of the oppositions reasons for opposing the proposed under the Straits of Mackinac solution
some unbiased neutral reporting ----as usual