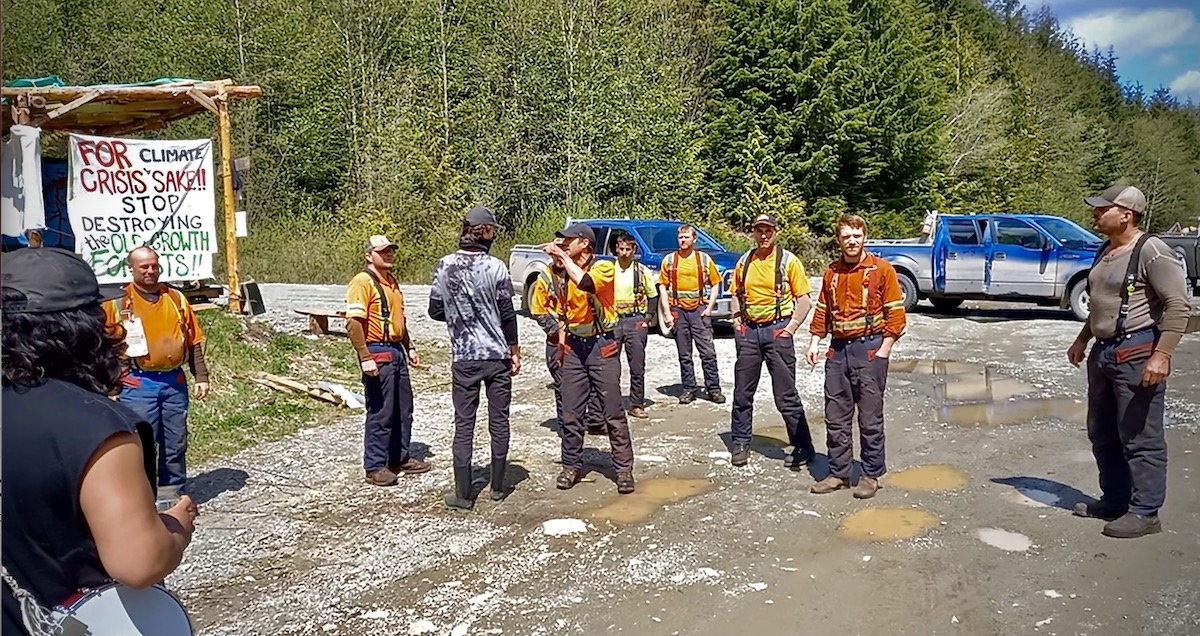 Warning: There is offensive language in the following article and video.

Investigations are underway after a heated confrontation between loggers and old-growth activists with the Fairy Creek blockade on southern Vancouver Island was captured on video this week.

A group of forestry workers can be seen swearing, yelling and flinging threats and racist taunts, as well as allegedly assaulting a young First Nations man filming the incident, in two videos released by the Rainforest Flying Squad (RFS) on Wednesday afternoon.

Instead, the conflict took place Tuesday at a residential camp in the Walbran Valley in Tree Forest Licence (TFL) 44, which is near the Fairy Creek region, she said.

“This was a targeted attack,” said Heyrman, saying the loggers had to go out of their way to drive to the camp where several First Nations youth were.

“The people who were camping had not previously had any interaction with those people.”

The conflict took place in the region around Port Renfrew where tensions are rising with the ongoing blockades against logging company Teal-Jones that were set up in August to protect the pristine Fairy Creek watershed in TFL 46.

“Go home and collect your welfare cheque that we pay for,” one forestry worker can be heard saying in one video.

“You and your f***king teepees,” yelled another.

In addition to telling activists to go home or “there’d be trouble to pay,” angry forest contractors accused the activists of threatening their jobs.

“You’re f***king with our livelihood,” said one worker.

“We’ve got kids to feed,” yelled another.

At one point, a forestry worker smacks a cellphone out of the hand of one of the protesters, and a scuffle can be heard with shouts for someone to “grab the phone” in the background.

The situation is being treated with the utmost seriousness and urgency, according to a shared statement issued by Western Forest Products via its TFL 44 Limited Partnership — a joint operation with the Huu-ay-aht First Nations-owned company Huumiis Ventures.

“The behaviour of the individuals in the video is completely unacceptable and is entirely at odds with our shared values,” said the statement issued by John Jack, chair of Huumiis Ventures LP, and Shannon Janzen, the chair of TFL 44 LP.

“The use of racist language, intimidation, and acts of violence have no place in our society or our workplaces, and we have zero tolerance for such behaviour.”

The men belonged to a contracting crew, and the company involved has been directed to conduct a full investigation into the role the employees played in the incident, the statement added.

Forestry activity in the area is paused, and the RCMP and WorkSafe BC have also been notified.

“We appreciate that there may be disagreements about how our forests are managed in British Columbia, but we expect those disagreements to be addressed in a respectful manner, free from violence and racism,” TFL 44 LP said.

Teal-Jones was granted a court injunction against the blockades in its TFL last month. But RCMP had not arrested or removed protesters as of Friday. The RFS applied to the court this week seeking an appeal to the injunction.

RCMP spokesperson Cpl. Chris Manseau said Friday that although police had not been contacted by anyone involved prior to the video’s release, after seeing it, members of the Lake Cowichan detachment headed to the area to talk to witnesses and victims to determine the next steps.

“I haven’t heard any updates yet,” Manseau said, adding it was concerning to see the yelling and alleged assault of a youth in the video. But an investigation will also be necessary to determine what events happened before and after the filming, he said.

The young man who was recording the incident wasn’t badly hurt, but suffered cuts to his knee and his phone was reportedly broken and stolen, Heyrman said.

It’s not immediately clear if the witnesses and victims will take the matter forward with the RCMP, she added.

“My understanding is that they're thinking about it, but they haven't made a decision.”

The onus should be on the forestry companies to deal with the unprovoked aggression from their workers, Heyrman said.

It’s unfortunate that tension exists between people protecting old-growth forests and workers since both groups pay the price of poor forestry management and corporate greed, she said, noting the RFS isn’t against logging second-growth forests.

“I don’t want to talk about this as an escalation,” Heyrman said.

“This isn't really an issue between workers and protesters, this is an issue of government regulations and industry practices.”

The ten of 'em certainly

The ten of 'em certainly weren't hired for their brains. Or extensive vocabularies. Isn't the company with the harvesting license responsible for the behaviours of its contractors?
(If they need something to work out their aggressions/frustrations on, sit-ups might be a plan.)