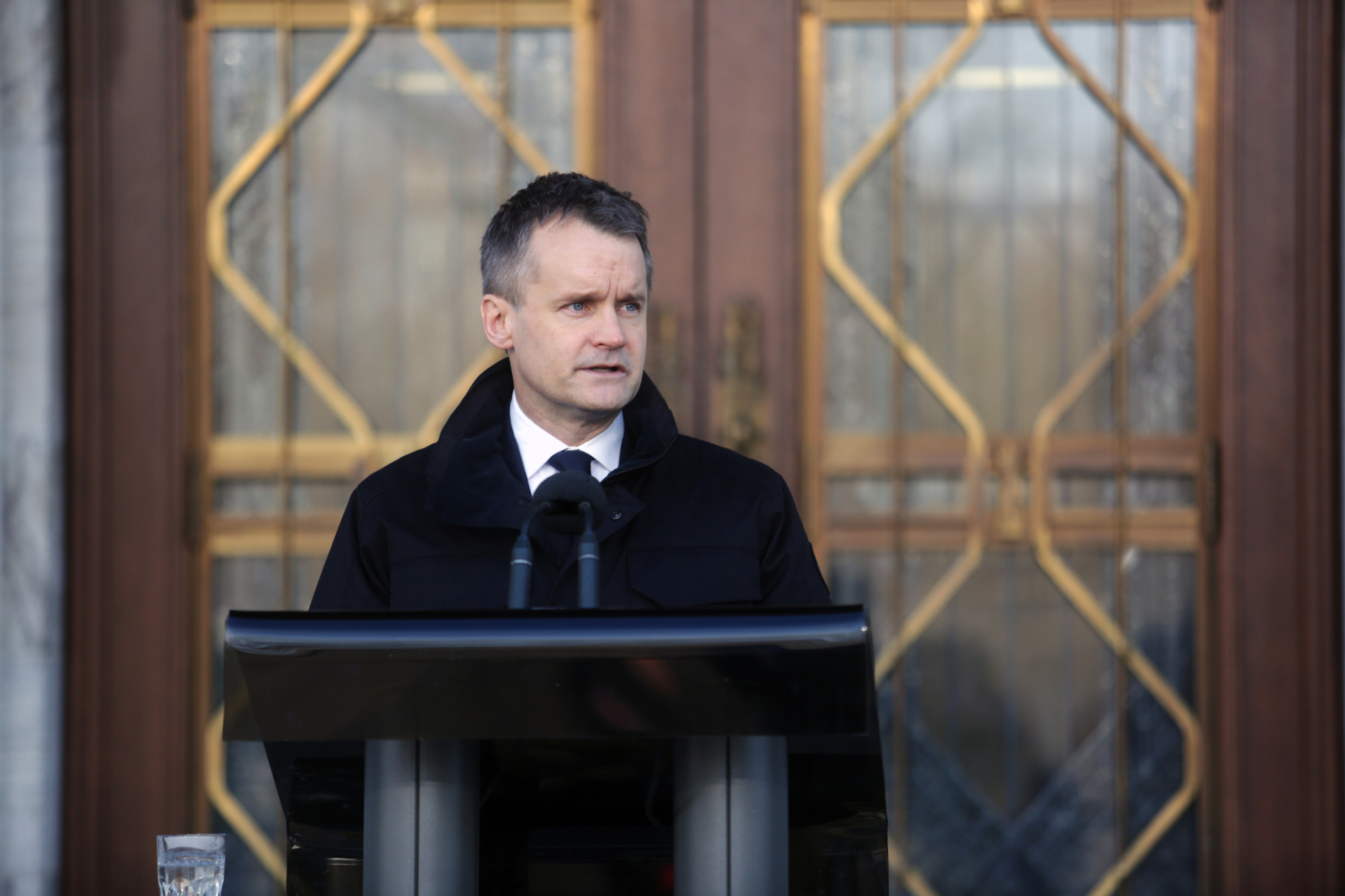 Canada has filed a legal brief in United States federal court siding with an oil pipeline company against Michigan, even going so far as to invoke the memory of 9/11 as a reminder of how the two countries have worked together in the past.

Michigan, which has ordered Line 5 to shut down by May 12, is seeking to defend its waterways from the risk of an oil spill. In an amicus brief filed Tuesday, the federal government argued the looming threat of a shutdown “poses grave concerns” for Canada’s economy and for the country’s relationship with the U.S.

“We are continuing to work together to defend Line 5, leaving no stone unturned in defending Canada's energy security and the workers who built this country," said Natural Resources Minister Seamus O’Regan in a statement.

The looming shutdown deadline falls 180 days after Michigan Gov. Gretchen Whitmer gave notice that the state was terminating a 1953 easement for the pipeline. Whitmer said it poses an “unacceptable risk of a catastrophic oil spill,” as its twin pipes lie exposed at the bottom of the choppy waters of Straits of Mackinac, a major shipping lane connecting Lake Michigan with Lake Huron.

Enbridge has vowed to keep the pipeline running and protect it by encasing it in an underground tunnel.

Canada’s amicus brief ⁠— a document filed by a person or group who isn’t party to a lawsuit but has an interest in the outcome ⁠— says the court should stop Michigan’s shutdown order from going ahead while discussions between Canada and the U.S. over treaties are still ongoing.

The document was filed in the U.S. District Court for the Western District of Michigan, where Enbridge is challenging Whitmer’s decision. The company is currently in court-ordered mediation with the state.

The government said Canada and the U.S. have "worked together for over a century," through national agreements and process, to "secure their common security and prosperity while managing their shared resources and protecting their shared environment."

The brief then cites several examples of co-operation, such as NAFTA and its successor, the navigation system implemented in the Great Lakes and the NORAD system, "under which a Canadian general gave the order to scramble jets to protect the United States on 9/11/2001."

Ottawa also said the U.S. “undertook a solemn and reciprocal commitment” when it signed a 1977 treaty with Canada “not to interfere with the operations of international hydrocarbon transit pipelines” such as Line 5 without justification.

On the eve of the shutdown deadline for Line 5 pipeline, Canada has filed a brief in U.S. court, siding with Calgary-based energy company Enbridge. #cdnpoli

"The shutdown order that Michigan seeks to enforce poses grave concerns for Canada at two distinct levels: first, for Canada’s ability to rely on bilateral treaties that are at the heart of the U.S.- Canada relationship, and second, for Canada’s energy security and economic prosperity," reads the brief.

So far, Enbridge has said it will refuse to comply with Michigan's order. Bobby Leddy, a press secretary for Whitmer, didn’t answer Tuesday when asked what steps Michigan would take if the company does not shut down Line 5.

“These oil pipelines in the Straits of Mackinac are a ticking time bomb, and their continued presence violates the public trust and poses a grave threat to Michigan's environment and economy,” Leddy said in an email.

“Enbridge’s continued operation of the Line 5 pipelines in the Straits of Mackinac would be unlawful.”

The pipeline’s presence has led to significant Indigenous opposition. A dozen Native American tribes and at least one group of First Nations have all expressed their concerns about severe consequences to the waters of the Great Lakes and the lands around them, should there be a major oil spill.

The pipeline segment beneath the straits has been dented, and Enbridge has had to reinforce it in recent years. Elsewhere on the line, it has leaked crude oil and natural gas liquid. A 2018 study by Michigan Tech demonstrated how a worst-case oil spill would threaten dozens of species and hundreds of kilometres of shoreline.

Federally recognized sovereign tribal governments in Michigan refer to the straits as a “sacred wellspring of Anishinaabe life and culture,” and four of them have gone so far as to back Michigan in its legal battle against Enbridge with a court filing of their own.

The tribal nations say the waters of the straits are linked with cultural and spiritual practices and are too sensitive to be left exposed. They also say the straits fall within an area defined in an 1836 treaty with the U.S. that was only ceded on the condition that they could continue to exercise their right to hunt, fish and gather — a right they say is threatened by the pipeline.

On Monday, the executive council of the Bay Mills Indian Community, one of the four tribal nations that backed Michigan in the court case, “banished” Line 5 from its reservation and the “lands and waters of their ceded territory” detailed in the 1836 treaty, including the straits.

"Enbridge's continued harm to our treaty rights, our environment, our history, our citizens, and our culture, is a prime example of how banishment should be used," said Bay Mills Executive Council President Whitney Gravelle. "Enbridge has weaponized our traditional culture as a way to influence issues around Line 5.”

Anishinabek Nation Grand Council Chief Glen Hare has also criticized the Canadian government for focusing on the importance of the 1977 pipelines treaty while not giving the same attention to treaties with First Nations.

Hare said the Anishinabek Nation supports the Bay Mills Indian Community in its opposition to the pipeline.

"As First Nations people, we have direct responsibility to protect water and a deep spiritual connection with water. Should anything that's being transported in these 67-year-old pipelines get into the Great Lakes, it would have devastating effects and irreparable consequences," he said.

"We stand in solidarity with our relatives on the other side of the Medicine Line who are working relentlessly to protect our Great Lakes. Those in positions of power who can put an end to this environmental threat need to step up and help us in our efforts to protect our water sources."

In its legal briefing filed Tuesday, Canada argued that it “shares Michigan’s interest in protecting the waters of Lake Michigan and Lake Huron” but that it does not believe there’s serious risk of a major spill in the Straits of Mackinac. Canada also pointed to possible economic impacts from the possible shutdown, and said it might need to find other, more “environmentally harmful” fuels and ways of transporting them.

“In short, businesses, employees, consumers, and potentially the environment, would suffer,” the document said.

Moments after O’Regan announced that Canada had filed its brief Tuesday, a group of climate justice groups joined the Anishnabek Nation in calling for the pipeline to be closed down in an open letter to Prime Minister Justin Trudeau.

“The government has aligned itself with Enbridge instead of the health and safety of the Great Lakes and the communities along the shore,” the organizations wrote.

“These 68-year-old pipelines, designed to last 50 years, present a clear and present danger to the Great Lakes.”

This story was updated to include details about the legal brief, Indigenous opposition to Line 5 and an open letter from climate justice groups.

once again, the federal

once again, the federal Liberals show us their real alignment in their actions NOT in their words. Watch as once again, they defend fossil, cherry pick which treaties it will honour, make wildly overblown claims of "jobs jobs jobs" which never materialize and fight hard for the past status quo winners, not the future health of citizens.