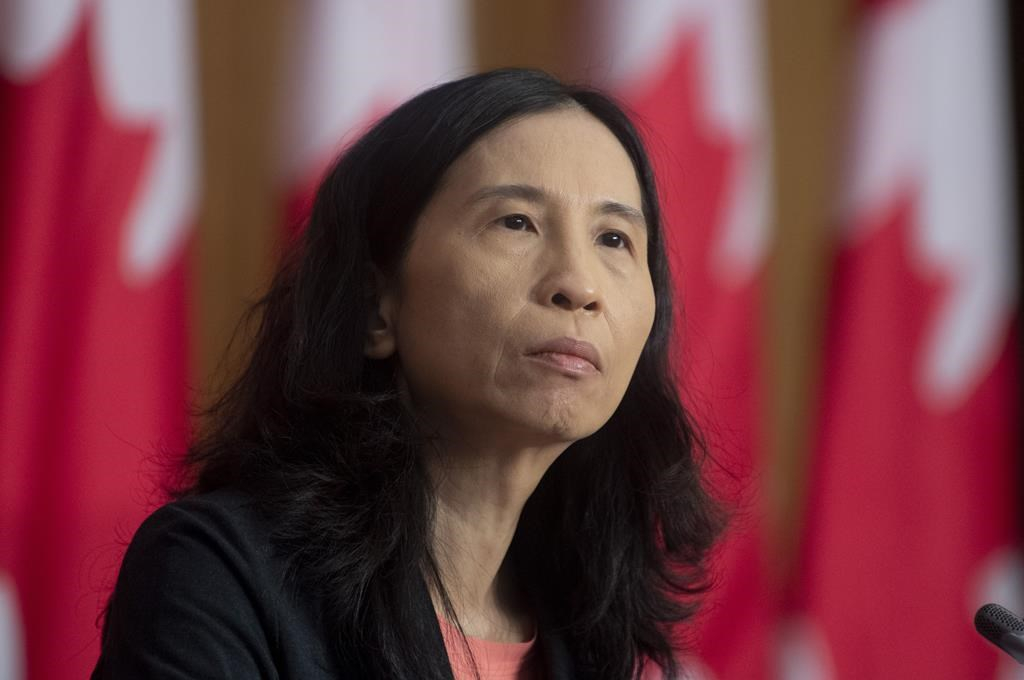 Federal health authorities laid out their vision of what life could look like after most Canadians are vaccinated against COVID-19, just as regional officials warned some people may be getting ahead of themselves through ill-advised gatherings.

Canada's chief public health officer raised hopes Friday that summer fun and fall holiday bashes may lie ahead as she rolled out a blueprint for how the vaccination campaign could lift the country out of COVID-19 lockdown.

Dr. Theresa Tam said Canada may have "passed the peak" of the third wave, as average daily COVID-19 case counts dropped to fewer than 7,000 for the first time since April.

There's also been a decline in severe illness, with an average of fewer than 4,000 COVID-19 patients being treated in hospital each day, she said.

Tam touted "great strides" in the fact about 50 per cent of adults have at least one vaccine dose, suggesting that maintaining this pace could pay off in the form of "an outdoor summer that gets us back into many of the activities we've been missing."

That could include small outdoor gatherings with family and friends in the warm weather, such as picnics in the park, outdoor sports and patio dining, said Tam.

For that to happen, at least 75 per cent of adults must receive at least one jab, including 20 per cent who have both doses, according to federal modelling. Tam said that first immunization target is "within sight."

The next step will be to fully vaccinate at least 75 per cent of eligible adults to allow for more indoor activities this fall, including in-person learning at colleges, a return to the office and multi-household holiday celebrations, she said.

"To get to this better summer and fall, we need to keep doing everything we can to protect ourselves and our communities, ease the pressure on the health system and help bring an end to this pandemic," said Tam.

Anand said Pfizer has moved up its schedule to deliver two million doses early next week, and 1.4 million more are expected to arrive on Thursday and Friday. Moderna is also set to send 1.1 million doses next week, she said.

As the vaccine rollout accelerates, Health Minister Patty Hajdu said the national timeline to ease restrictions is "realistic," but these targets have to be tailored to local epidemiological conditions.

"This gives Canadians a vision of what it looks like as we proceed down this vaccination path together," said Hajdu. "It helps provide that guideline for Canadians as they undergo their own community's journey with vaccination."

The upbeat tone at the federal level was discordant with grim forecasts out of Manitoba, where a top health official predicted Friday that COVID-19 numbers would worsen for at least another week before dropping.

Dr. Jazz Atwal, the deputy chief public health officer, said a current spike in cases and hospitalization rates had been made worse by too many people gathering and interacting with others, despite public health orders that have been tightened three times in the last month.

Meanwhile, health officials in Nunavut scolded scofflaws in Iqaluit on Friday, warning that unauthorized gatherings could quash the city's hopes for summer.

Twelve more cases of COVID-19 have been reported in Iqaluit, bringing the city's active total to 78.

"We have a very short summer and it seems it's getting shorter by the day," said Nunavut Health Minister Lorne Kusugak.

There were 26 more deaths from the virus, according to the province. Officials said 1,582 COVID-19 patients were in hospital, including 777 people in intensive care.

Quebec maintained its run of case counts below 1,000 on Friday, reporting 838 diagnoses, and eight more deaths. The province said there were 530 hospitalizations, and 123 intensive care cases.

Saskatchewan reported 227 new cases of COVID-19 and two more deaths. The province also confirmed one case of vaccine-induced immune thrombotic thrombocytopenia (VITT), or blood clots, in a woman who had received the AstraZeneca vaccine in April.

On the East Coast, Nova Scotia reported 117 new cases and one virus-related death, as a court-ordered injunction blocked a pair of anti-mask rallies planned in the Halifax area this weekend.

U.S. eases masking rules for fully vaccinated. Canada may not

By Lauren Krugel | News, US News, Politics | May 14th 2021
Coronavirus in Canada