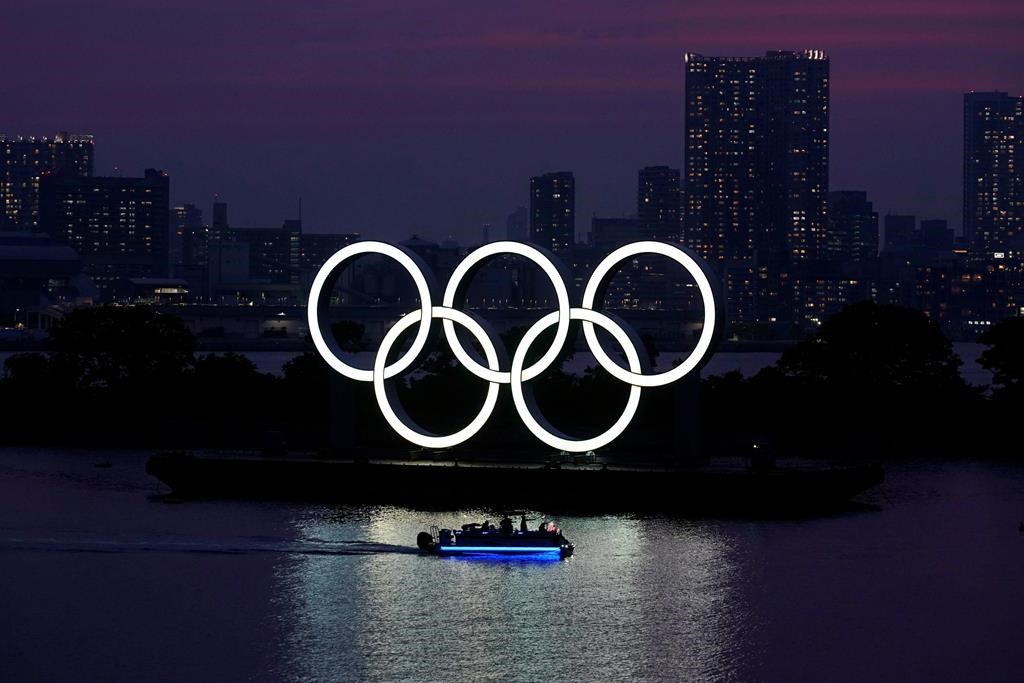 The Olympic rings float in the water at sunset in the Odaiba section of Tokyo, on Wednesday, June 3, 2020. File photo by The Associated Press/Eugene Hoshiko
Previous story
Next story

A new poll by Leger and the Association of Canadian Studies suggests the country is divided over plans to send athletes from Canada to the upcoming Olympic Games in Tokyo as Japan grapples with climbing COVID-19 cases.

Forty-two per cent of those surveyed said they don't think Canadian athletes should compete in the Tokyo Games — delayed by a year due to the pandemic — while 39 per cent said Team Canada should attend.

When asked if they think competing in the games will be safe, 46 per cent of people said no, 35 per cent said yes and 19 per cent were not sure.

This torn perspective of Canadians could help give government officials, who will make the final call on whether athletes indeed take part in the Games, a way out, says Leger executive vice-president Christian Bourque.

"Canadians are so divided, certainly not convinced it's safe for athletes, so it's as if they're saying, 'If we decided to go, OK, and if we decide not to go, fine,'" Bourque said.

He added that he was surprised by these results.

"Usually it's something that Canadians like to celebrate, whether it's Summer or Winter Olympics, just to see the Maple Leaf out there competing, it always gets huge ratings on TV, so I would have assumed that there would be more of a willingness to say, 'Let's start enjoying ourselves again, including the Olympics,'" he said.

"But it seems again Canadians are prudent, careful, measured in how they answered the survey."

The survey questioned 1,529 Canadians and 1,003 Americans online between May 7 and May 9. It cannot be assigned a margin of error because internet-based polls are not considered random samples.

If governments are concerned about Canadians being upset about athletes jumping the queue for their COVID-19 vaccines, they need not be.

More than six in 10 respondents said they believe Canadian athletes should be prioritized for vaccines in Canada.

Athletes aren't required to be vaccinated to participate in the Games, however Pfizer and BioNTech announced earlier this month they would be donating COVID-19 doses to inoculate athletes and officials preparing for the Tokyo Games.

Heritage Minister Steven Guilbeault was not available for an interview Friday, but his spokeswoman, Camille Gagne-Raynauld, said federal officials are closely monitoring the status of the pandemic and its effect on the Tokyo Games.

The government is working closely with its sport partners and with the support of the Canadian Embassy in Tokyo, Gagne-Raynauld said.

"The priority remains the health and safety of our athletes, coaches and support staff."

The results from the poll of U.S. residents suggest our neighbours to the south are far more comfortable with the idea of sending their athletes to Japan for the Games, which open July 23.

A 55 per cent majority indicated they want American athletes to attend the games compared to only 20 per cent who said they should not, and more than half of U.S. respondents said they think it will be safe to compete.

Bourque said this isn't surprising, because Americans overall have been far less favourable toward imposed public health closures and restrictions over the last year according to his firm's polling.

"They've always had very much more of a laissez-faire attitude toward everything pandemic-related, compared to Canadians. In their case, a majority are saying, 'Yes, we should go and yes, it's safe.'"

A state of emergency in Tokyo and Osaka was extended earlier this week to more parts of the country as sports and health officials around the world continue to monitor the evolving situation on the ground.

Anti-Games sentiments have been gaining ground in Japan, where only about two per cent of the population has been vaccinated.

On Friday, a petition calling for the Olympics to be cancelled "to protect our lives" with more than 350,000 signatures was submitted to Tokyo Gov. Yuriko Koike. The petition says money spent on the Games would be better used on people in financial need because of the pandemic.

Meanwhile, the Leger and Association for Canadian Studies survey also looked at Canadians' travel plans for the summer and for the remainder of the year. The results suggest a majority of Canadians plan to stay put and are not ready to get back on airplanes or travel to the U.S. any time soon.

These results mirror those from surveys of Canadians' travel plans conducted last year, Bourque said — which he equated to a kind of "Groundhog Day."

"I think Canadians will remain very careful of what plans they're making," he said.

"A lot of people too don't fully trust they will get refunded if they reserve now and cancel later, so this is probably not helping Canadians say, 'Let's plan for the fall, let's gamble on (the pandemic) being fine by then.' So there's a bit of a wait and see."

This report by The Canadian Press was first published May 15, 2021.

— With files from The Associated Press and Lori Ewing, The Canadian Press