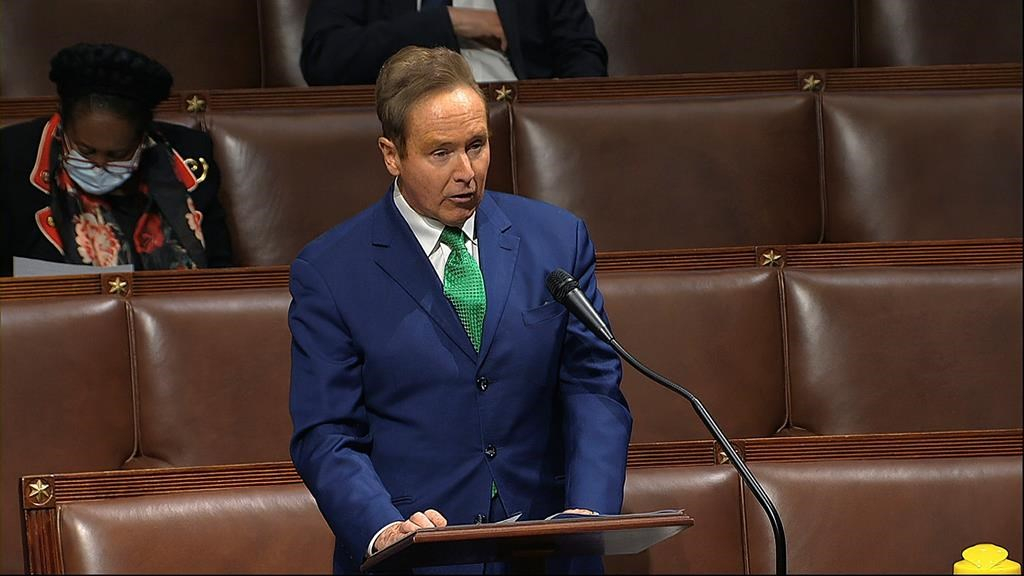 In this image from video, Rep. Brian Higgins, D-N.Y., speaks on the floor of the House of Representatives at the U.S. Capitol in Washington, Thursday, April 23, 2020. File photo by The Associated Press-House Television via AP
Previous story
Next story

A U.S. lawmaker who has made a political crusade out of getting the border with Canada reopened is again pressing his case with President Joe Biden — and this time, he believes he has the Centers for Disease Control on his side.

The CDC's decision to no longer require fully vaccinated Americans to wear face masks in virtually all situations, including indoors, is an "affirmation" of the power of the COVID-19 vaccines, New York Rep. Brian Higgins wrote Friday in a letter to the White House.

Higgins, a Democrat, urged Biden to "directly engage" with Prime Minister Justin Trudeau in order to widen the definition of essential travellers by the end of May, with an eye toward fully reopening the border by early July.

"Trends in vaccination and the most recent guidance from the CDC affirm that the time is right to do this safely and effectively," the letter reads.

"This decision underscores the minimal risk Americans will pose to Canadians when crossing the border to visit family and property."

Indeed, the CDC's announcement Thursday provided a rare moment of celebration for Biden, who emerged maskless from the White House to acknowledge the occasion.

"As the virus tragically rages in other countries, as other nations — even wealthy nations — are mired in the challenges of slow vaccine rollout and poor economic conditions as a result, things are very different here."

Nearly 60 per cent of American adults have received at least one dose of the vaccine, compared with just 5.5 per cent four months ago, he added.

Canada, for its part, is also making "steady progress" in its vaccination efforts, Higgins said — thanks, in part, to the U.S. providing 1.5 million doses of the Oxford-AstraZeneca vaccine.

But while he claimed more than half of Canadian adults have received at least one dose, the latest data from the Public Health Agency of Canada indicate that as of May 8, that proportion was only 38.87 per cent.

"I applaud your administration's decision to share doses of the vaccine with Canada to expedite their fight against the pandemic," Higgins wrote. "We can and should share more vaccines with them."

The White House is currently making plans to provide by June some 60 million doses of AstraZeneca — a vaccine that has not received approval for use in the U.S. — to countries around the world, including Canada.

However, a number of Canadian provinces, including Quebec, Ontario and Nova Scotia, have stopped administering AstraZeneca as an initial dose, citing evidence of an extremely rare blood clot disorder in a small number of people who received the vaccine.

Some 655,000 doses of AstraZeneca have been received from the global vaccine-sharing alliance known as COVAX, but in many cases they are being reserved primarily as second doses or for people who can't take other vaccines.

Canada has confirmed 18 cases of the disorder in patients who received the AstraZeneca shot and 10 others are under investigation.

Higgins first wrote to Biden back in February to urge the president to get serious about drafting a plan to reopen the border, proposing much the same as he did Friday: a gradual easing of restrictions with a full reopening in time for the July 4 holiday.

He also pointed to media reports from mid-March, citing unnamed sources, that said the White House was considering mid-May as a possible timeline for beginning to reopen the border.

"It is time to take the first steps towards reopening the northern border to non-essential travel," Schumer said, calling for a "staged and steady" plan that would be "based on science, data and common sense."

Incidental travel between the two countries has been forbidden since the pandemic began raging in North America in March 2020, with only trade shipments and essential workers being allowed to cross.

The two countries have extended the restrictions on a monthly basis ever since, with the current extension set to expire May 21.

By The Canadian Press | News, US News, Politics | March 11th 2021
Coronavirus in Canada