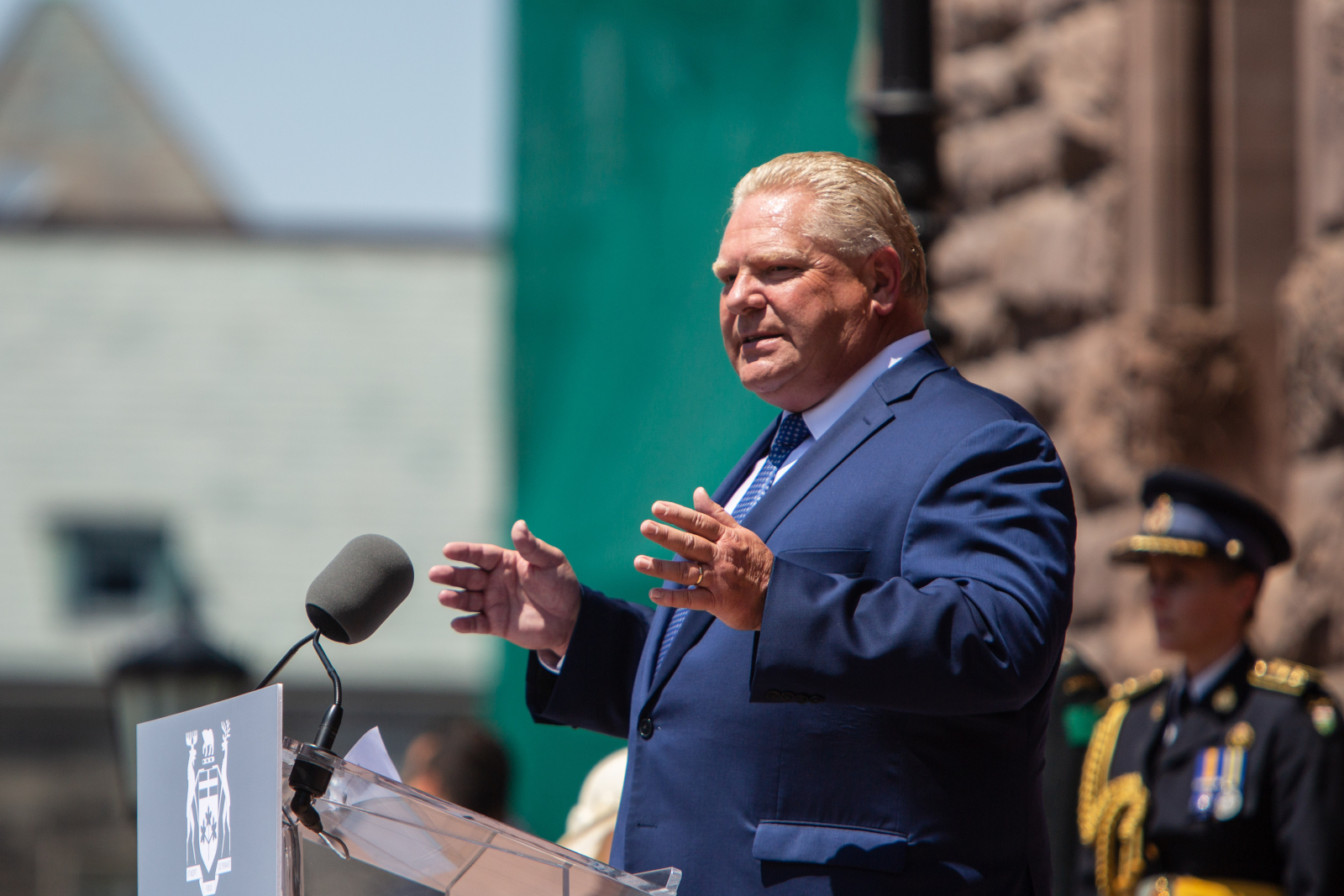 Premier Doug Ford at Queen's Park in 2018. The Ford government is facing three court challenges of its controversial Bill 197 this week. File photo by Alex Tétreault
Previous story
Next story

The Ford government passed the omnibus Bill 197 last July without public consultation, despite a warning from Ontario’s auditor general that doing so could be “not compliant” with the law. The suits, launched by a group of First Nations and two separate coalitions of environmentalists last summer, will be heard at the same time this week.

“Whether Doug Ford likes it or not, the laws of this province require his government to consult Ontarians before making changes that impact our environment,” said Priyanka Vittal, who is legal counsel for Greenpeace Canada, one of the environmental groups challenging the law.

“His government’s failure to do so is illegal. So we’re saying enough is enough.”

The bill also expanded the province’s power to use minister’s zoning orders, or MZOs, a special directive that allows Municipal Affairs Minister Steve Clark to make an unappealable decision about how land can be used. From 2018 to 2020, the Ford government has used MZOs to fast-track developments on sites involving environmental concerns 14 times, a National Observer investigation found earlier this year.

Under Ontario’s Environmental Bill of Rights, the government must consult the public for 30 days about measures that impact the environment. It’s also required to post notices of such changes on the province’s environmental registry.

The government posted notices on the registry, but did not hold consultations about Bill 197 before passing it, writing a clause into the legislation that would retroactively exempt it from the requirement.

The first court challenge of Bill 197 was filed by the environmental law charity Ecojustice, which is representing Greenpeace and the Wilderness Committee. The groups are asking a judge in Ontario Divisional Court to find that the province acted illegally and order Premier Doug Ford’s Progressive Conservatives to go back and consult the public.

“This government has repeatedly pushed an anti-environment agenda while cutting Ontarians out of the decision-making process,” Ecojustice lawyer Ian Miron said in a statement.

A second court case was filed by the Canadian Environmental Law Association (CELA), which is representing the conservation group Earthroots, non-profit Ontario Nature, a 16-year-old climate activist named Cooper Price, and Michel Koostachin, who was born and raised in Attawapiskat, a First Nations community in northern Ontario. Earthroots is led by Gord Miller, who was Ontario's environmental commissioner from 2000 to 2015.

“Whether Doug Ford likes it or not, the laws of this province require his government to consult Ontarians before making changes that impact our environment,” said Priyanka Vittal of @GreenpeaceCA, one of the groups challenging Bill 197. #onpoli

“A posting on the (environmental) registry may sound like a minor procedure, but it is required by law for good reason,” Earthroots said in a statement ahead of the hearing.

“Without the (environmental) registry, governments could … quietly slip radical and detrimental changes to conservation rules through the legislature.”

The groups are arguing that the government’s decision to push through Bill 197 without consulting First Nations violated treaty rights.

“What makes this historic for First Nations is that we are saying the new laws are unconstitutional, not just because we were not consulted, but because the new law sets back reconciliation, harms First Nations, and violates the honour of the Crown,” says Association of Iroquois and Allied Indians Grand Chief Joel Abram in a statement.

“It is not just process, but (also) the result that has to respect our rights and jurisdiction. Saying ‘shame on you’ is not enough. We ask the court to say ‘No’ to what this government did.”

In court filings, the province has argued that it did not need to consult the public on the measures, and that they do not impact treaty rights.

Hearings are scheduled for May 17 through May 20. It’s not clear when the judge might deliver a decision.

This government’s willingness to break free of years of regulations and legislation in order to accomplish their goals is exhausting. Premier Ford may be confused and may believe that we elect kings rather than a legislature.

The use of retroactive legislation is troubling and seems to be a handy tool for this government as it is used with the Crown Liability and Proceedings Act which effectively dismissed pending lawsuits against the government.

In this situation, the proposed Bill 197, allows the government of the day to violate the existing legislation requiring consultation with the public. The danger with retroactive legislation is what prevents any government to simply overwrite any law?

Will the next government need to spend its first 100 days retroactively re-writing these laws? When does it end?

The premier ordered the dismantling of the Prince Edward County wine turbines at a
cost to the taxpayer of hundreds of millions of dollars.

This is a simple example of irresponsible spending that in my view equates to the use of retroactive legislation.

The only retroactive legislation that I can support is one that would provide a redo of the last provincial election. Would that help Premier Ford to understand the concern?

Laws need to be prospective, rather than retroactive,. The law must be capable of being obeyed and will guide the behaviour of its people. How is this province guided by retroactive laws?

Premier Ford should be aware of:
Smith v. Inco 2010 ONSC 3790
Imperial Oil v. Quebec 2003 SCC 58
Both involve retroactive legislation that cost INCO and Imperial Oil hundreds of millions of dollars repairing environmental damage that had met the existing legislation at the time.
It can work both ways.