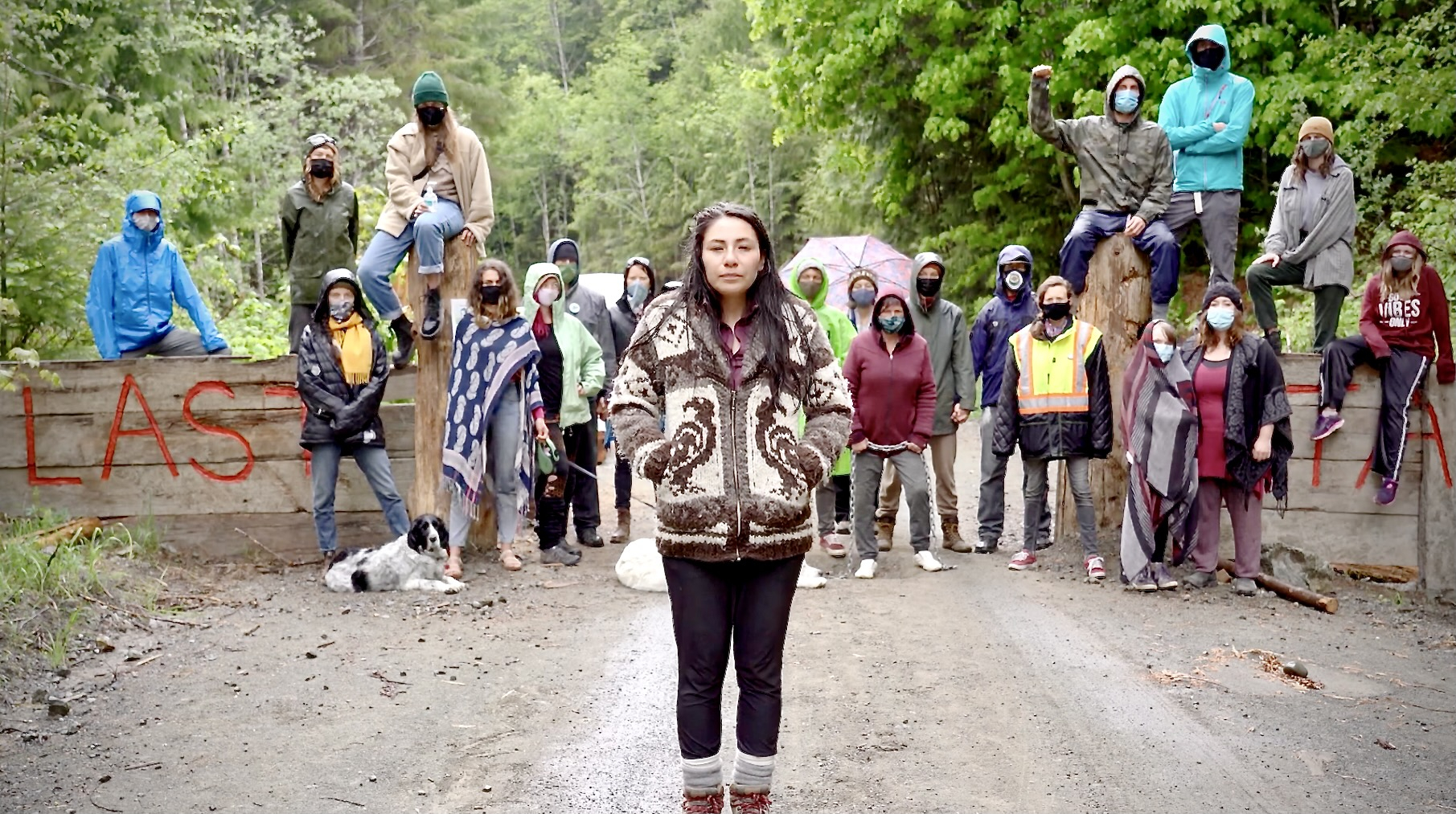 Kati George-Jim, also known as xʷ is xʷ čaa, expressed concern in a video about the anticipated RCMP enforcement of a court order at the Caycuse Camp, where five old-growth activists were arrested Tuesday. Photo screen grab courtesy of RFS
Previous story
Next story

Five people involved with the Fairy Creek old-growth blockade in a remote region of southwestern Vancouver Island were arrested Tuesday.

The arrests are the first as RCMP enforced a court injunction against protesters who have spent nearly nine months blocking logging company Teal-Jones’ access to various stands of old-growth forest in tree farm licence (TFL) 46 near Port Renfrew.

“During the course of day, several individuals refused to leave the area, resulting in the arrest of five people for breaching the injunction order,” Manseau said.

One person has already been released after being processed at the Lake Cowichan RCMP detachment, and the others are expected to be released by end of day, he added.

At least two protesters had chained themselves to a gate before being removed by police, and more arrests are likely to follow, RFS said in a statement Tuesday.

The Caycuse Camp is expected to continue being the focus of enforcement since the site falls in the RCMP’s current exclusion zone, said lawyer Noah Ross, a member of the blockade's legal support team.

“This is probably just going to be the start of a protracted standoff,” Ross told the National Observer.

“I understand that arrests aren’t finished at Caycuse.”

It has been difficult to verify what’s happening on the ground at the camp in the remote watershed. It doesn’t have cell reception, and you can only call out via satellite phone, Ross said.

“This is probably just going to be the start of a protracted standoff,” lawyer Noah Ross told the National Observer. #OldGrowth #FairyCreek #CaycuseCamp

“They’ve lost satellite connection since the RCMP moved into the area, and it’s been difficult getting in contact with them,” he added.

“So, that may not be the end of arrests for today, and we’re expecting more over the next couple of days.”

Ross said he’d heard there were about 60 people at the protest camp.

Although not all of them were necessarily protesters planning to violate the court order that bans any interference with Teal-Jones' operations in the TFL, he said.

“The RCMP threatened to arrest everyone who was there, whether or not they were violating the injunction,” Ross said.

The identities of those arrested, and if they were violating the court order, is still unclear, he added.

The RFS legal support team, which involves about a dozen lawyers, is standing for any arrestees to be processed, Ross said.

The most likely charges people will face is breaching the injunction, which went into force April 1, he said.

Some arrestees may not want to agree to the likely conditions of release — such as staying away from the protest zones — and will need timely legal representation to get them before a judge to try to limit any jail time, Ross said.

“There will be lawyers that will represent them, whatever the charges end up being,” he added.

Two court applications are underway to overturn the RCMP’s exclusion zone and hope to be heard Friday, Ross said.

One will be made by the Canadian Association of Journalists seeking free access to the zone for media, the over hopes to overturn the exclusion zone on the basis of civil rights concerns, he said.

The court initiatives were launched after the RCMP prevented media and other observers from gaining access to a police-designated control area blocked by a checkpoint on Monday.

Protesters had expressed concerns that observers would not be able to watchdog police as they enforced the injunction in the Caycuse Camp — the only Fairy Creek protest camp currently not accessible in the region.

The RCMP has updated procedures for media personnel wishing to access the controlled area, Manseau wrote in an email to National Observer on Tuesday afternoon.

Journalists can cross the checkpoint after checking in with RCMP communications officers on site and identifying themselves and the outlet they work for, Manseau said.

However, media will still be accompanied to a safe, specified area where they won’t interfere with police operations.

When no police operations are in effect in the controlled area, media can enter the zone freely after signing in at the roadblock, Manseau added.

However, protesters will only be allowed as far as the RCMP checkpoint, he said.

The Mounties have not clarified what area falls into their control zone, RFS said.

But only access to the Caycuse Camp is currently being restricted, while all other remaining blockade camps, including the Fairy Creek site, are open to movement, the squad said.

The RFS wants the province to immediately halt all old-growth logging on Vancouver Island, and keep its promise to abide by the recommendations of B.C.’s Old Growth Strategic Review, spokesperson Kathleen Code said.

“We are proud of all our members, who are willing to stand up for the old-growth forests that a majority of British Columbians want protected, in spite of the personal cost to themselves,” Code said.