Poutine is a national dish worth protecting: Quebec dairy farmers 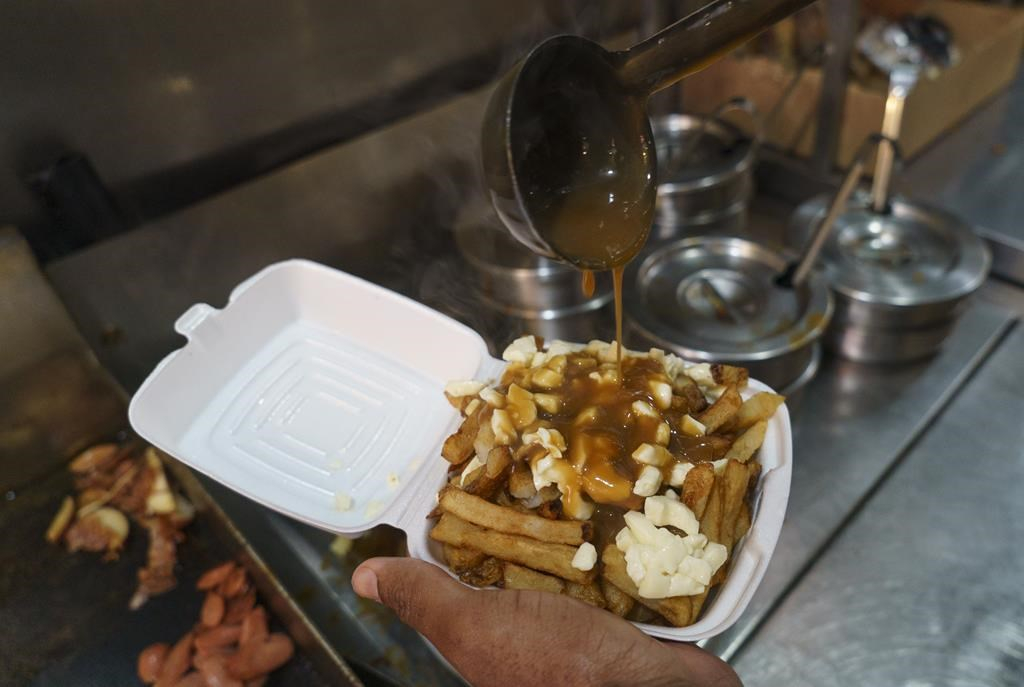 A cook prepares a poutine at La Banquise restaurant in Montreal on Tuesday, May 18, 2021. The Quebec dairy industry trying to get a protected trademark for the popular Quebecois dish. Photo by: The Canadian Press/Paul Chaisson
Previous story
Next story

MONTREAL — A group representing Quebec's dairy industry says it's eyeing a special government designation for the term poutine in order to better promote it internationally.

Luc Boivin, a cheese producer and member of the Conseil des Industriels laitiers du Québec, says the traditional dish of fries, cheese curds and gravy has become a source of national pride.

"Almost everyone has a story to tell about a poutine, whether it’s after a hockey game, or coming out of a bar at 3 a.m. and going to get a poutine at La Banquise in Montreal or Chez Ashton in Quebec City," he said in an interview Tuesday.

The owner of Fromagerie Boivin, based in Quebec's Saguenay-Lac-St-Jean region, believes poutine is set to become the next big food trend, like hamburgers, tacos and sushi before it.

In order to capitalize on the dish's growing popularity, Boivin says a working group is forming that will seek to create a national branding strategy to help producers collectively market their products. The group is also looking at obtaining "reserved designation" status, which is an official recognition by the Quebec government of the authenticity of distinctive regional food products.

He said the project is in its early stages, and it's not yet clear whether the group will seek out simple recognition for the dish, or a more protective mechanism that would restrict outsiders from using the term.

While the details are still being worked out, the eventual goal of the campaign is to protect and promote the identity of poutine as a Quebec and Canadian product. "Like pizza is Italian and sushi is Japanese, we have to protect that identity," Boivin said.

He said the success of poutine is one of the rare bright spots in recent years for Quebec cheese producers, who are still dealing with increased competition stemming from the United States-Mexico-Canada trade agreement.

He believes there's a huge opportunity in exporting the cheese curds, which are the signature ingredient in poutine and are made primarily in Quebec. Curds are shipped frozen, making them relatively easy to export, he said.

He said the regulatory process is likely to be complex, since dairy is a highly controlled industry. But he's allowing himself to dream of the day when sports stars such as NHL player Sidney Crosby or football player Laurent Duvernay-Tardif could be called upon to promote a homegrown product.

Sylvain Charlebois, a professor of food distribution and food policy at Dalhousie University and the author of the book “Poutine Nation,” said poutine originated in Warwick, Que. in the late 1950s when a customer came into a restaurant and asked owner Fernand Lachance to add cheese curds to his fries. The dish was further refined in 1964 when Jean-Paul Roy, a professional sauce-maker in Drummondville, added gravy to the dish, Charlebois said.

It was later picked up by local restaurants, and has since become popular worldwide. “What poutine has accomplished in 50 years, it took pizza 110 years,” Charlebois said in a phone interview.

He agrees that something should be done to “officialize” poutine, which he describes as the first dish that is "truly Canadian." However, he prefers an approach that seeks to recognize the origins of poutine rather than trademark it.

He said a protective approach would create more bureaucracy and regulation and overlooks the fact that one of the dish's main appeals is its flexibility and ability to be customized to all tastes. He suggests Canada instead follow the lead of France, which has submitted a proposal to UNESCO to have the baguette recognized as an intangible cultural heritage symbol.

A similar designation for poutine would help to celebrate its heritage, its ingredients, such as cheese curds, and its unique story, he said.

"It’s a rural story, and very rarely will you see a dish created in a little village that becomes world famous," he said.

This report by The Canadian Press was first published May 19, 2021.