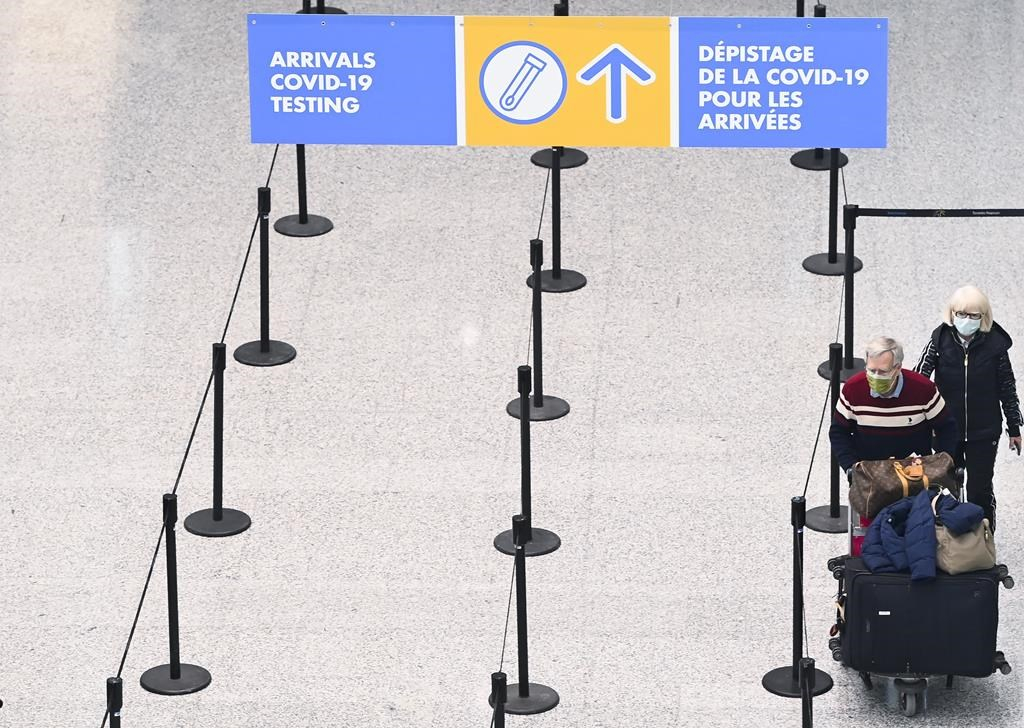 Travellers are directed to take a mandatory COVID-19 test after arriving on an international flight at Pearson International Airport during the COVID-19 pandemic in Toronto on Feb. 1, 2021. The Canadian Press/Nathan Denette
Previous story
Next story

The country's two most populous provinces are laying out plans to reopen as Canada's COVID-19 vaccination pace brings optimism, but Manitoba's premier warned surging infections there are linked to people not getting their shots.

A delayed third wave has put immense pressure on health care in Manitoba, where a record number of people are in intensive care. Three COVID-19 patients were transferred to northwestern Ontario this week to free up bed space.

Pallister said health officials have told him the majority of people getting infected and hospitalized have not been vaccinated, even though anyone 12 and older can get a shot in the province.

He said his Progressive Conservative government will be announcing an incentive to get people vaccinated and will also bring in tighter public health measures in advance of the May long weekend.

Canada was expected to move ahead of the United States on Thursday in the percentage of the population to have received one dose of a vaccine.

Forty-nine per cent of all Canadians — almost 18 million people — were expected to have their first dose by the end of the day, moving just ahead of the U.S. at 48 per cent.

Surging vaccination rates combined with dropping infection numbers in much of the country are prompting many provinces to outline plans on how they will reopen to give people more freedom this summer.

New COVID-19 modelling also shows that vaccination efforts and with a stay-at-home order have put the province in a much better place than it was a few weeks ago.

There were 2,400 new cases Thursday and 27 more deaths linked to the virus.

Dr. Adalsteinn Brown, who is a member of the Ontario COVID-19 Science Advisory Table, said there is still increased pressure on hospitals. He said any reopening plans will bring challenges and people must remain cautious.

"These are all challenging trade-offs and none of them are without risk.”

Quebec reported 662 new cases and eight more deaths, a day after presenting a plan to lift COVID-19 curfews later this month and remove a mask mandate by late August.

The province expects to gradually allow bars and restaurants to reopen starting with some patios on May 28.

Officials there are also planning to announce a plan to vaccinate young people between 12 and 17 years old.

On the national front, federal Public Safety Minister Bill Blair said restrictions on non-essential international travel, including to the United States, are being extended until at least June 21.