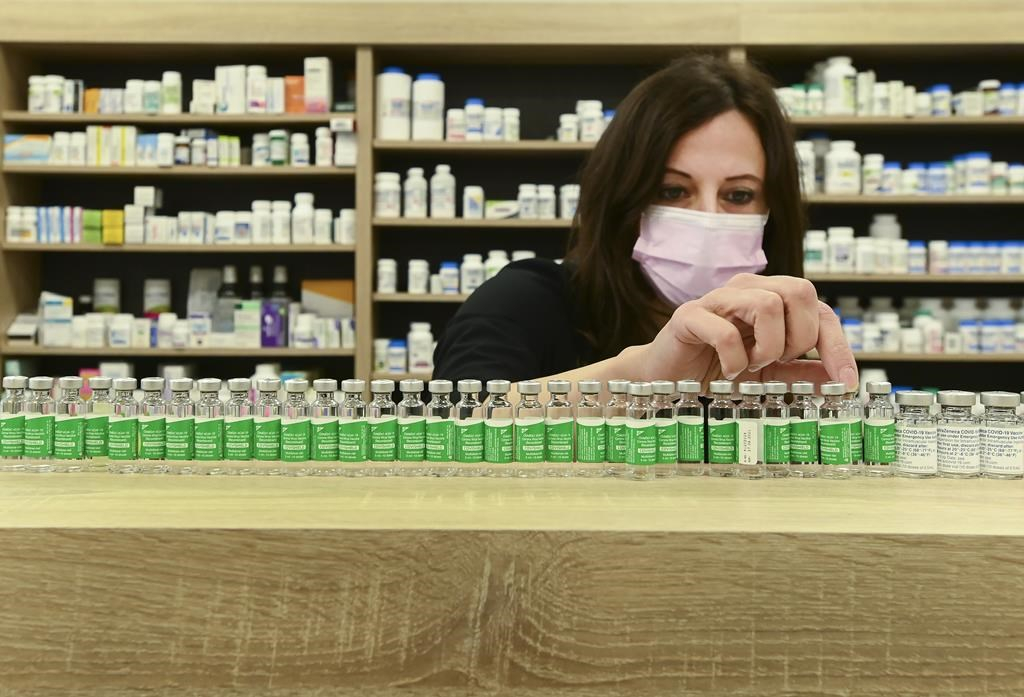 Pharmacist Barbara Violo arranges all the empty vials of the Oxford-AstraZeneca COVID-19 vaccines at the Junction Chemist during the COVID-19 pandemic in Toronto, on Monday, April 19, 2021. Photo by: The Canadian Press/Nathan Denette
Previous story
Next story

TORONTO — Impatience and a lack of clarity persisted Thursday over the fate of thousands of doses of the Oxford-AstraZeneca vaccine set to expire in the coming weeks.

Several provinces have stopped giving the COVID-19 shot over concerns of rare, fatal blood clots. Health authorities are still trying to decide whether to resume its use and if using a different vaccine for second shots makes sense.

At the same time, Ottawa is distributing hundreds of thousands of AstraZeneca doses to the provinces, some of which are sitting on soon-to-expire stockpiles.

Justin Bates, head of the Ontario Pharmacists Association, said an announcement that had been expected on Thursday would now likely happen in the coming days. The association, he said, was in confidential discussions with the province about using the AstraZeneca, something he said should be done.

"Absolutely. We have a shared objective with the ministry to ensure that we use, wherever appropriate and feasible, all of the AstraZeneca remaining doses."

Federal Health Minister Patty Hajdu said this week the vaccines would not go to waste but Ontario, which has about 31,000 unused doses, is up against a May 31 expiry date. Similarly, Manitoba has also reported having about 7,000 AstraZeneca doses that need to be used before month's end.

"Provinces and territories are weighing their options very closely in terms of second doses for those people who have received AstraZeneca for a first dose," Hajdu said.

Bates said it would take a concerted effort to get the shots in arms, if approved, involving reaching out patients to schedule an appointment. They would also need to provide informed consent around dosage intervals and relative risks, which he said were far outweighed by the potential benefits.

Dr. Irfan Dhalla, an internal medicine specialist in Toronto, said people should be able to make their own choice as to whether get AstraZenica, either as a first of second dose, or wait for another brand known as an mRNA vaccine.

Some of Canada's AstraZeneca vaccine supply is about to expire as confusion over use hampers its use. #vaccines #astrazeneca #cdnpoli #COVID

"Similarly, it's very reasonable for people who have already had one dose to want to have their second dose now rather than wait 16 weeks, and then have a second dose with an mRNA vaccine."

More than 2.1 million people have had AstraZeneca. Health authorities said there were about two-dozen confirmed cases of vaccine-induced thrombotic thrombocytopenia, or VITT, the rare but serious blood-clotting disorder.

The National Advisory Committee on Immunization, known as NACI, was still awaiting data from a mixing-and-matching study underway in Britain.

Dr. Joss Reimer, medical lead of Manitoba's vaccine task force, couldn't say how many doses might not be used. Nothing prevents doctors or pharmacists from giving the shots as long as manufacturer and Health Canada rules are followed, she said.

"There are unique circumstances where people may benefit from an earlier dose," Reimer said. "Clinicians do have the ability to do an individual assessment."

-With files from Holly McKenzie-Sutter in Toronto