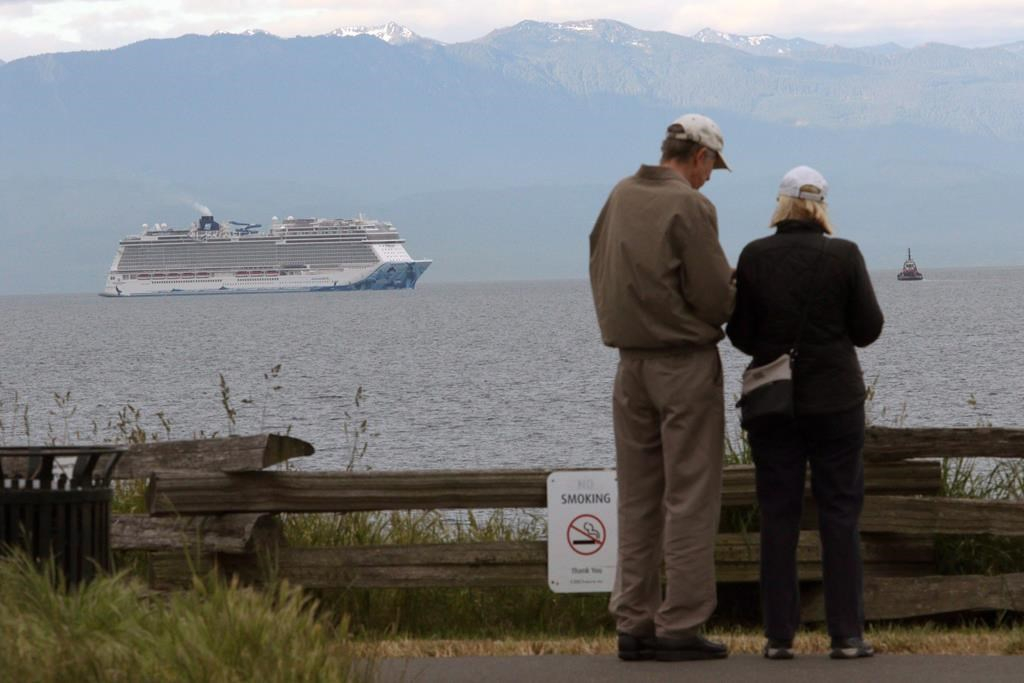 People look on as the Norwegian Bliss en route from Alaska to Seattle makes it's way towards Ogden Point, in Victoria, B.C., Friday, June 1, 2018. Photo by: The Canadian Press/Chad Hipolito
Previous story
Next story

VANCOUVER — When the U.S. House of Representatives swiftly passed legislation amending a historical law that some say could have severe consequences for British Columbia's port communities, it came as little surprise to Ian Robertson.

The CEO of the Greater Victoria Harbour Authority said he tried to alert Canadian and B.C. politicians to the ramifications of the change that would temporarily allow international cruise ships to bypass B.C. ports.

"I must admit it's been frustrating, we've been sounding the alarm for the past few months," Robertson said.

The proposed legislation passed Thursday applies to cruise ships travelling between Washington state and Alaska and gives them the green light to sail past B.C. ports without stopping, a requirement introduced more than a century ago to protect U.S. shipbuilders and operators.

The amendment is a response to Canada's ban on cruise ships through February 2022 to prevent the spread of COVID-19 and the legislation would only last as long.

However, given the estimated $2.7-billion economic impact of the cruise industry on the B.C. coast, Robertson said it feels like a dangerous precedent to set before exploring other options.

Victoria has the most to lose, alongside fellow transit port communities like Nanaimo and Prince Rupert, which benefit from the flood of tourists who spend in their communities during the stops. Vancouver, a "home" port from which passengers start and finish cruises, is more insulated, he said.

The harbour authority wants the federal government to allow "technical calls," which would see the ships maintain the routine stops without allowing passengers and crew to leave the ship.

At the very least, they should be pushing for reassurances that the U.S. change will remain temporary, he said.

The amendment will become law with President Joseph Biden's sign-off.

Two Alaskan senators pursued the change. Sen. Dan Sullivan, one of the bill's sponsors, said he was pleased to see bipartisan, unanimous support in the Senate after running into roadblocks trying to work with Canada.

"We've put forward a number of very reasonable suggestions to try to accommodate what we are hoping will be a fighting chance for our tourism season, for our small businesses so decimated by this pandemic to our colleagues in Canada," he said before the Senate.

"This is not the co-operative spirit that has defined the Alaska-Canadian relationship for decades. Quite frankly, we've been disappointed by it."

"With the number of provinces battling a third wave of COVID-19 and the current public health situation, Canada is not at a point to safely resume cruise operations in our waters," the statement said.

Canada supports U.S. actions requiring that 98 per cent of crew and 95 per cent of passengers be vaccinated. Transport Canada will also reassess measures as the pandemic evolves and review all requests, including technical stops, in consultation with provincial and local health authorities, the statement added.

"Minister Alghabra has spoken a number of times with Senator Sullivan on the importance of cruise ships both to Canada and the United States, and how we can work together to safely welcome cruise ships when both countries are ready to do so," it said.

After brushing off the legislation as a "blip" that wasn't likely to pass quickly, B.C. Premier John Horgan said Tuesday he was lining up meetings with U.S. officials to talk about it.

However, the senators who put forward the legislation made clear in their correspondences that it would be a temporary measure until border restrictions are lifted, he added.

"I'm taking great comfort in that, the legislation is specific about that," Horgan said.

If it would help maintain the industry in B.C. in the long term, he said he is also happy to talk about technical port calls.

The cruise industry's direct and indirect impacts in Canada totalled more than $4.2 billion in 2019, according to a tally by industry group Cruise Lines International Association.

The pandemic sunk those figures to zero in 2020 and the same losses are expected this year.

Donna Spalding, who works in government affairs and community relations for the Cruise Lines International Association, North West and Canada, said she couldn't predict if the temporary legislation could become permanent.

Despite being a transit stop, Victoria is considered a "premier" destination and cruise lines consistently hear positive feedback from guests, including that they planned to return, she said.

But it would be up to each cruise line to determine if they saw a benefit in bypassing transit stops, if that were an option beyond the pandemic, she added.

This report by The Canadian Press was first published May 21, 2021.

By The Canadian Press | News, US News, Politics | November 19th 2020
Coronavirus in Canada

This article refers to

This article refers to "legislation amending a historical law", but it does not say
- what the historical law is;
- what the proposed amendments are;
- WHY those amendments "could have severe consequences for British Columbia's port communities".
The Canadian Press could do better.