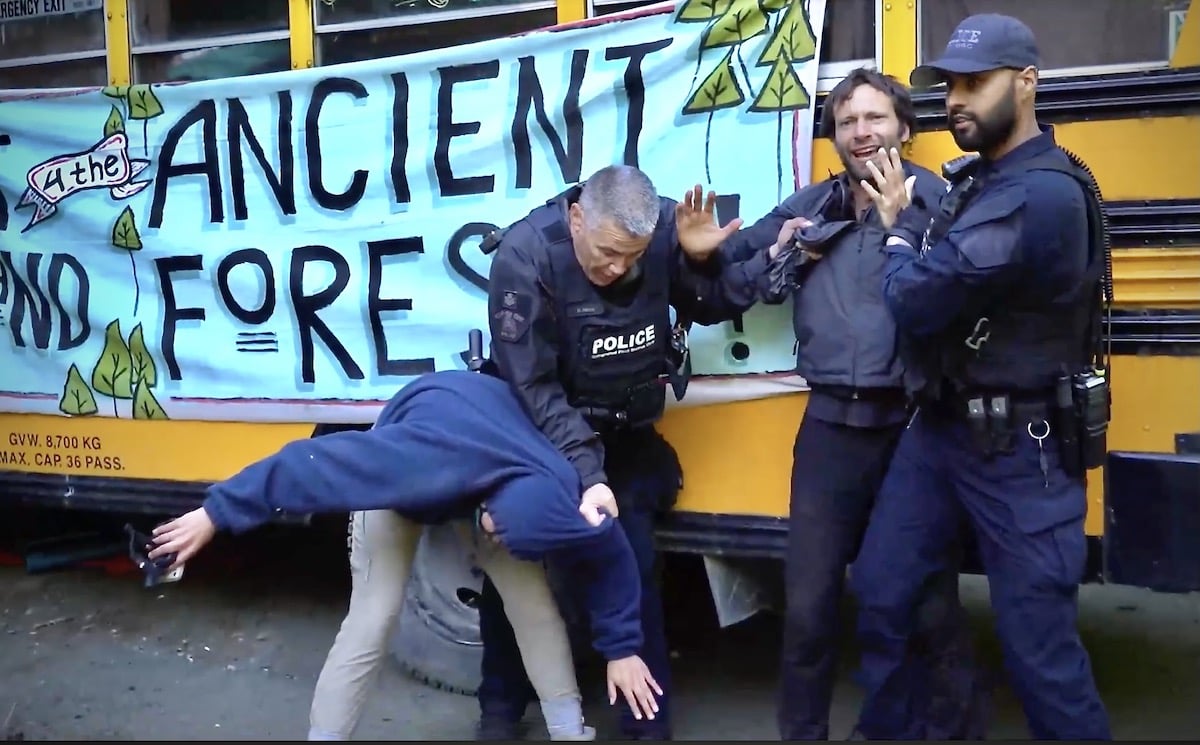 RCMP arresting old-growth activists at the Caycuse blockade Thursday demonstrated a higher level of force than earlier in the week. Screen grab courtesy of the Rainforest Flying Squad
Previous story
Next story

RCMP say the arrests happened at an area called the Waterfall Camp, near Port Renfrew, B.C.

Three of those arrested face civil contempt of court charges, while the other two face obstruction charges.

Police say 53 people have been arrested in total since an injunction started to be enforced last week.

Those arrested Monday were taken to Lake Cowichan RCMP for processing.

Tensions have been escalating at old-growth blockades on Vancouver Island as chainsaws reportedly started up in the Caycuse region Friday and a clash between protesters and police the day before was posted to social media.

In violation of a court injunction, RFS activists have established a number of blockades within logging company Teal-Jones’s tree farm licence (TFL) 46 in the Port Renfrew region. As of Thursday evening, RCMP reported they had made 21 arrests this week.

On Friday morning, a logging crew arrived in the area near the Caycuse blockade camp, where most of the arrests have been, and began felling dangerously close to a number of activists tree-sitting in the cut-block, RFS said in an email.

“They may claim they are legal observers or media, and some are, but we just don’t know that then and people are unpredictable,” says #RCMP Cpl. Chris Manseau. #FairyCreek #Logging #Blockades

“Despite being very aware there is at least one tree-sitter very high up in a tree at Caycuse, RCMP have allowed Teal-Jones back into the area, and they have started felling trees,” RFS wrote.

“We are very concerned about (the tree-sitter's) safety.”

Officers are examining how to extract the tree-sitters in the area where the logging is taking place, RFS said, adding WorkSafe BC has also been contacted about the risks logging poses to activists.

One RFS tree-sitter, Jessica Ostroff, has been live-streaming on Instagram from her perch in a massive cedar in a Caycuse cut-block.

Logging activity in the cut-block around the tree-sitters, about 12 kilometres from the Caycuse camp, stopped just after 10 a.m. Friday when WorkSafe inspectors and RCMP officers arrived on scene, Ostroff told the National Observer.

RCMP have also set up a new roadblock on Braden Road outside of Port Renfrew, which is closer to the Fairy Creek watershed, and arrested at least three activists at a new blockade that has prevented forest crews from working just outside the pristine watershed for several days, RFS said.

The RCMP were unable to confirm how many people had been arrested before the National Observer’s publishing deadline.

A video on social media also emerged showing RCMP arrests at the Caycuse blockade that involved significantly more force than those made earlier in the week.

Warning: The following video depicts some violence that may trigger some viewers

Kati George-Jim, RFS spokesperson and a member of the Pacheedaht First Nation, was one of the people arrested in the video.

While some activists on scene were peacefully protesting and breaking the injunction, fastened to logs or structures, others, including herself, were there as legal observers or freelance media, she said.

The first two arrests involving herself and another activist were particularly violent, she said.

“They (RCMP) went after a single person who was walking on the bridge, who was not obstructing anything and not breaking the injunction,” George-Jim said.

“They chased after him, tackled him, and then I walked over to say that’s illegal, and then they grabbed me.”

The RCMP do not have the legal jurisdiction to establish an exclusion zone and arrest people who are not actively violating the injunction by prohibiting forestry crews from working, George-Jim said.

She has a responsibility to be in the Caycuse to witness and report back to her family and other First Nations who are the title-holders of the land and resources in question, George-Jim said.

“This is not an isolated incident,” she said.

“Violence against the land is definitely connected to the violence against Indigenous people. So, until both of those things stop, we won't be able to have a future that we're all looking forward to.”

Additionally, three charges of obstruction, two charges of possession of stolen property, and one charge of assault of a police officer were being recommended against some arrestees.

The BC Civil Liberties Association (BCCLA) outlined concerns about the RCMP containment area and the arrests within the zone in the Caycuse region in a press release Friday.

Police do not have the legal and arbitrary discretion to block members of the public, including legal observers and the media, from accessing the area, the BCCLA said.

“The BCCLA is deeply disturbed by the RCMP exclusion zone near the Fairy Creek blockades on unceded Ditidaht territory,” said Veronica Martisius, BCCLA staff counsel, who added the injunction does not prohibit movement in the area or peaceful protest.

“The RCMP, by their actions, are showing blatant disregard for Indigenous rights and the Canadian Charter of Rights and Freedoms,” she said.

“This situation is alarmingly reminiscent of what occurred in Wet’suwet’en territories last year,” Martisius added.

RCMP spokesperson Cpl. Chris Manseau said the police checkpoints and temporary control area are in place to ensure safety in the remote area — both for officers and members of the public.

As to the arrests, a formal complaint has been filed with the Office of the Police Complaint Commissioner, Manseau said.

But Manseau wasn’t able to provide specifics on the complaint or who made it since the review is in progress, he said.

Generally, officers trying to enforce the injunction at a blockade don’t have any immediate way of confirming the identity or role of the people on scene, he said, adding such situations are fluid and dynamic.

“We only use a level of force that’s necessary to ensure these situations. We don’t want anybody injured, but they were warned,” Manseau said.

And officers can’t know the intentions of people at the scene, he said.

“They may claim they are legal observers or media, and some are, but we just don’t know that then and people are unpredictable.”

As a result, various people may be arrested inside the containment zone, but not all arrests necessarily result in charges, he said.

“It just means that anybody inside that zone, whether they're blocking logging trucks or not, is arrestable,” Manseau said.

“We’re just trying to stop offences (against the injunction) that are occurring.”

All of human "wealth" is

All of human "wealth" is ultimately derived from the earth on which we perch. How much wealth can we extract before the planet succumbs to our piracy?

"The Law, as embodied by the courst and police seem to exist purely for the purpose of defending the economic interests of the pirates. All kinds of justifications are advanced for continuing this destruction of the planet - "JOBS"!! being most often cited but "profits" are, and always have been the driving force behind what we call civilization. Which seems the perfect indictment of the evolution of the human brain. The total failure to understand the laws of entropy - you can't get out more than you put in. Ultimately you extract and alter to a finally unusable piece of trash, that which eons and natural processes created. Cutting down trees to make "fibre" destroys a naturally productive miracle of complex biochemical creation and turns it into something that will rot, decay and burn or end in a landfill. Way to go humans.

Hm. So the RCMP's official

Hm. So the RCMP's official rationale for some of these arrests is that the people they're arresting might be planning to commit crimes--or, well, not actually commit crimes, but violate an injunction--at some point in the future, and so it would be less convenient for them to not make the arrests. I don't think that passes any reasonable test of what police officers are supposed to be doing in a democratic society.

",,, people are unpredictable ..."
So we're all subject to arrest? Time to start requiring RCMP candidates to be able at least to read the Criminal Code, and understand that "human nature" isn't a crime.
Isn't their authorized use of force limited to "necessary force"???
Who'da thunk that kind of behaviour to be necessitated by the general "unpredictable nature" of humans.
Ya learn sumthin' every day, huh?