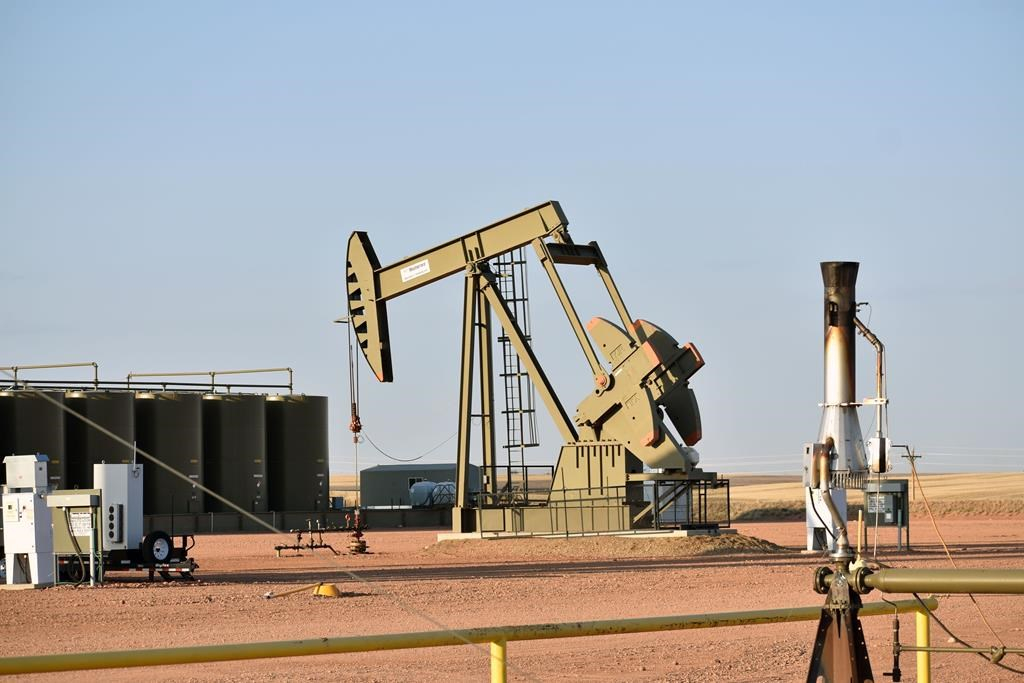 A pumpjack extracts crude oil from a well near New Town, N.D., on the Fort Berthold Indian Reservation on May 18, 2021. Photo by Matthew Brown / Associated Press
Previous story
Next story

U.S. District Judge James Boasberg made his decision after attorneys for the pipeline's Texas-based owner, Energy Transfer, argued that shuttering the pipeline would be a major economic blow to several entities, including North Dakota, and the Mandan, Hidatsa and Arikara Nation tribe, in the heart of the state’s oilpatch.

Boasberg said the Standing Rock Sioux had to “demonstrate a likelihood of irreparable injury” from the pipeline’s continued operation for him to rule in their favour.

The tribe, he said, has “not cleared that daunting hurdle.”

Attorneys for the Standing Rock Sioux and other tribes say the pipeline is operating illegally without a federal permit granting easement to cross beneath Lake Oahe, a Missouri River reservoir near the Standing Rock reservation that is maintained by the Corps. They said preventing financial loss should not come at the expense of the other tribes, “especially when the law has not been followed.”

“The Court acknowledges the Tribes’ plight, as well as their understandable frustration with a political process in which they all too often seem to come up just short. If they are to win their desired relief, however, it must come from that process, as judges may travel only as far as the law takes them and no further. Here, the law is clear, and it instructs that the Court deny Plaintiffs’ request for an injunction,” Boasberg wrote.

The Standing Rock tribe, which draws its water from the Missouri River, says it fears pollution. The company has said the pipeline is safe.

“We believe the Dakota Access pipeline is too dangerous to operate and should be shuttered while environmental and safety implications are studied — but despite our best efforts, today’s injunction was not granted,” Jan Hasselman, the EarthJustice attorney representing Standing Rock and other tribes, said in a statement.

The pipeline was the subject of months of sometimes violent protests in 2016 and 2017, during its construction.

The US$3.8 billion, 1,886-kilometre pipeline began operating in 2017 and environmental groups, encouraged by some of U.S. President Joe Biden’s recent moves on climate change and fossil fuels, were hoping he would step in and shut down the pipeline. But the Biden administration left it up to Boasberg, even after the judge asked the Corps to state an opinion on paper, if it had one.

“We believe the #DakotaAccess pipeline is too dangerous to operate and should be shuttered while environmental and safety implications are studied — but ... today’s injunction was not granted,” says EarthJustice attorney Jan Hasselman.

Boasberg on Friday also denied the state of North Dakota’s motion to intervene. State Attorney General Wayne Stenehjem had said the Corps has abandoned its lead role in defending its decision to grant an easement for crossing the river and that the agency can no longer “adequately represent” North Dakota’s interests.

In April 2020, Boasberg ordered further environmental study after determining the Corps had not adequately considered how an oil spill under the Missouri River might affect Standing Rock’s fishing and hunting rights, or whether it might disproportionately affect the tribal community. A federal panel later upheld the judge's ruling, but did not go as far as shutting down the pipeline.

Energy Transfer estimated it would cost US$24 million to empty the pipeline and preserve the structure, and said maintenance of the line would cost US$67.5 million every year it is inoperable.

Former president Barack Obama’s administration originally rejected permits for the project, and the Corps prepared to conduct a full environmental review. In February 2017, after Donald Trump took office, the agency scrapped the review and granted permits, concluding that running the pipeline under the Missouri River posed no significant environmental issues.

With files from Dave Kolpack in Fargo, N.D.

The judge's comments included an interesting, not to say bombshell caveat - the law [as written] doesn't allow him to grant the injunction.

Within that small idea, lies the entire history of colonialism, of imposed power written to validate its oppressive existence. All "law" participates in this exercise of power - from the Ten Commandments (and its predecessors) to the present day.

Law is made by the conquerors to ensure their power over the conquered. This seems to be the bedrock of "civilization". The peculiar notion of democratic law ( almost an oxymoron, one might suggest) is a much later and more tentative check on the might of the LAW.

Law is reserved as a tool for the use of the privileged. Thus it has always been and thus it shall continue - apparently.