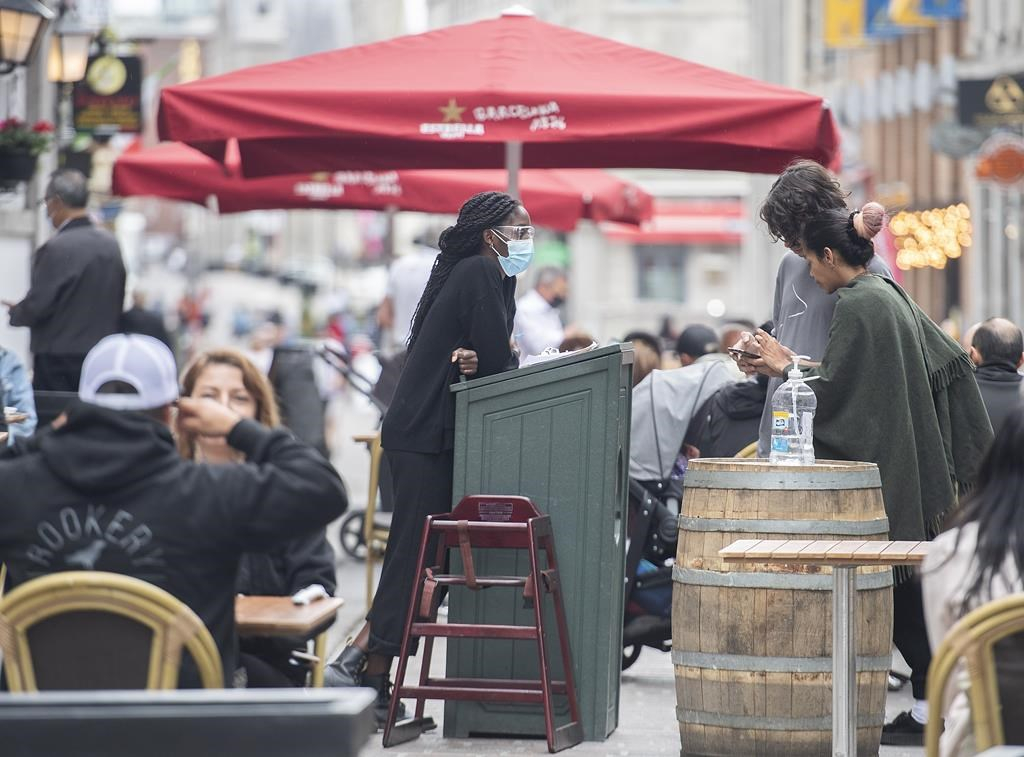 A greeter wears a face mask as people wait for a table at a restaurant in Old Montreal, Sunday, May 30, 2021. Photo by: The Canadian Press/Graham Hughes
Previous story
Next story

MONTREAL — Canada won't be rushed into reopening its border with the United States to non-essential travel, Prime Minister Justin Trudeau said Monday, as new COVID-19 case counts continued to drop in much of the country.

Calls for a reopening plan have started to intensify as vaccine coverage has increased on both sides of the border. The White House said last week it had not decided when or how to reopen the border with Canada, but business groups and lawmakers including Vermont Gov. Phil Scott and New York Rep. Brian Higgins have urged both countries to come up with a plan.

Trudeau said Monday that while many people are eager to see the border reopen, any easing of restrictions needs to be done carefully and with Canadians' safety in mind.

"We’re on the right path, but we’ll make our decisions based on the interests of Canadians and not based on what other countries want," he told a news conference in Ottawa.

Trudeau said 75 per cent of Canadians need to be vaccinated and daily cases need to continue to decline across the country before his government would be willing to ease travel restrictions.

"We all want to reopen, we all want to go back to travelling to see friends, take vacations, go on trips," he said. "But we don’t want to have to close again, tighten up again because there’s another wave."

Several regions in Quebec were downgraded to orange from red on the province's pandemic-alert system, allowing high school students to return full time to in-person classes and gyms and indoor restaurant dining to reopen.

Ontario reported 916 new cases of COVID-19, which is its lowest daily total since February. The last time that province reported fewer cases was on Feb. 17, with 847 new infections.

Many Ontarians aged 80 and up became eligible Monday to move up their second doses of COVID-19 vaccine after the government said last week it would shorten the minimum interval between shots to four weeks. Some health units, however, said they wouldn't be able to immediately offer earlier second doses due to supply challenges.

Further west, Manitoba said it has approved administering Pfizer-BioNTech or Moderna vaccines as booster shots for residents who got the Oxford-AstraZeneca for their first dose.

Dr. Joss Reimer, who is leading the province's vaccine rollout, said the decision was made following the results of a study from Spain and after similar decisions had been made in Quebec and elsewhere.

In contrast to some other provinces, Manitoba has continued to struggle with high COVID-19 infection rates. The province reported more than 300 new infections on Monday and Dr. Brent Roussin, the chief provincial public health officer, said there were still too many people in intensive care, which he said was putting pressure on the health system.

This report by The Canadian Press was first published May 31, 2021.