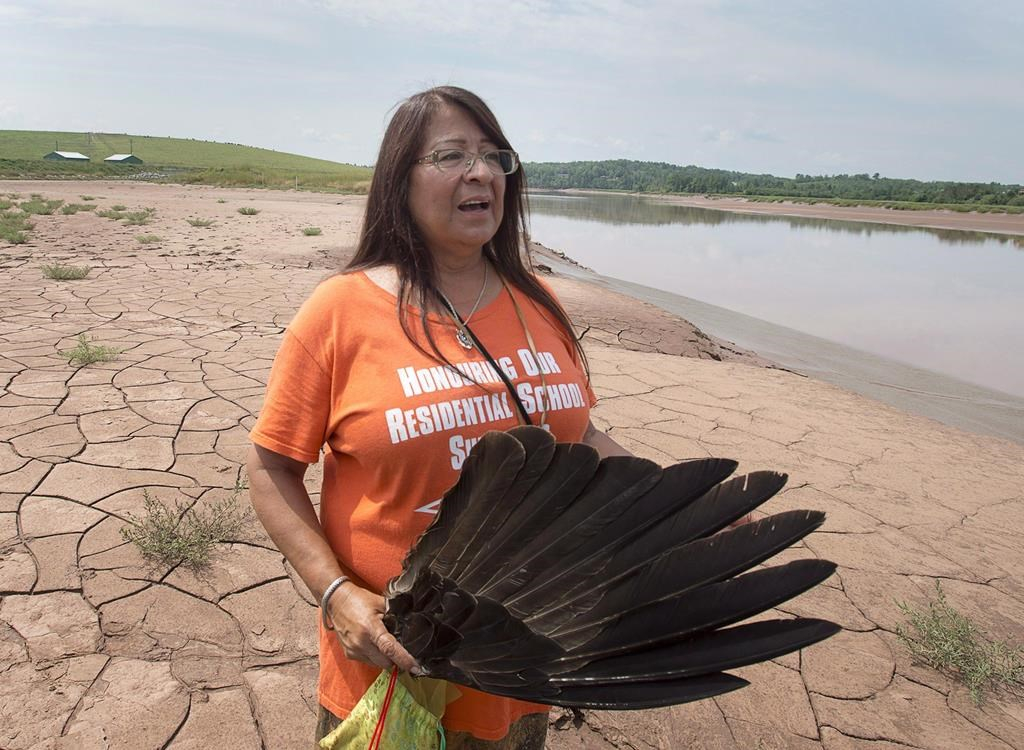 Mi'kmaq activist Dorene Bernard stands on the shores of the Shubenacadie River, a 72-kilometre tidal river that cuts through the middle of Nova Scotia and flows into the Bay of Fundy, Photo by: The Canadian Press/Andrew Vaughan
Previous story
Next story

HALIFAX — A survivor of the largest residential school in the Maritimes says the search will continue for unmarked graves at the sprawling rural site north of Halifax.

Dorene Bernard, a Mi'kmaq elder, confirmed Tuesday that ground-penetrating radar was used at the former Shubenacadie Indian Residential school in April and December of last year, but no graves or human remains were found.

"But there is a lot of work to do because the school had a great big footprint — acres of land all along the river," said Bernard, a well-known academic and advocate for Indigenous rights. "We're looking at meeting with survivors in the fall to come up with a plan for those investigations."

Bernard said she felt devastated when she learned last week about the 215 unmarked burial sites found at a former residential school in Kamloops, B.C., but she made it clear she was not surprised by the grim discovery.

"I wasn't shocked that that had happened," she said in an interview. "I'm sure other survivors across the land who know the history and have lived that history would also hope this would bring credibility to their stories."

There is an official list of 16 students who died while attending the Shubenacadie school, but Bernard said survivors have come forward in the past three years to provide the names of more missing children.

The Department of Indian Affairs opened the school in 1930. Students were taken in from all three Maritime provinces and the Restigouche reserve in Quebec. Operated by the Roman Catholic archdiocese of Halifax until 1956, the institution was only school of its type in Atlantic Canada.

In 2015, the Truth and Reconciliation Commission issued a report saying Canada's church-run, government-sponsored residential school system — in operation for 120 years — was a tool for cultural genocide. The commission has compiled a list 4,100 names of children who died of disease or accident while attending a residential school.

"Large numbers of the Aboriginal children who were sent to residential schools never returned to their home communities," the commission says on its website.

"Some of these children ran away, while others died at the schools. The exact number of children who died at school may never be known, but the death rates for many schools, particularly during times of epidemic or disease, were very high."

A search is underway for unmarked graves of #Indigenous children at a Nova Scotia residential school. #Novascotia

Virtually every member of Bernard's family was sent to the school near the banks of the twisting Shubenacadie River. Her father was one of the first students. When she first arrived there in 1961, she was four-and-a-half years old. She stayed until 1964, then returned from 1966 until 1967, when the school was shut down.

Bernard declined to talk about he experiences at the school.

As for the possibility that some students died and were buried on the site, Bernard says she's concerned that the large property has been disturbed over the years, mainly because the school burned down in the 1980s and was later replaced by a plastics plant.

"They levelled that area and filled in the hole when the building came down," said Bernard.

"They added more soil from other areas to level the grounds on top of the hill," she added. "It needs to be fully investigated .... We're going to continue to do the work .... I'm hopeful this will be speeded up as a result of what came out of Kamloops."

On Monday, the Mi'kmaq Rights Initiative and the Assembly of Nova Scotia Mi'kmaw Chiefs issued a joint statement saying the ongoing search for remains may include a nearby lake.

"We all want to ensure that the site is fully investigated as this work is extremely important to our people," the groups said.

In September 2020, Parks Canada announced it would recognize the location as a national historic site. Bernard said historic plaques are being made and will be installed this fall.