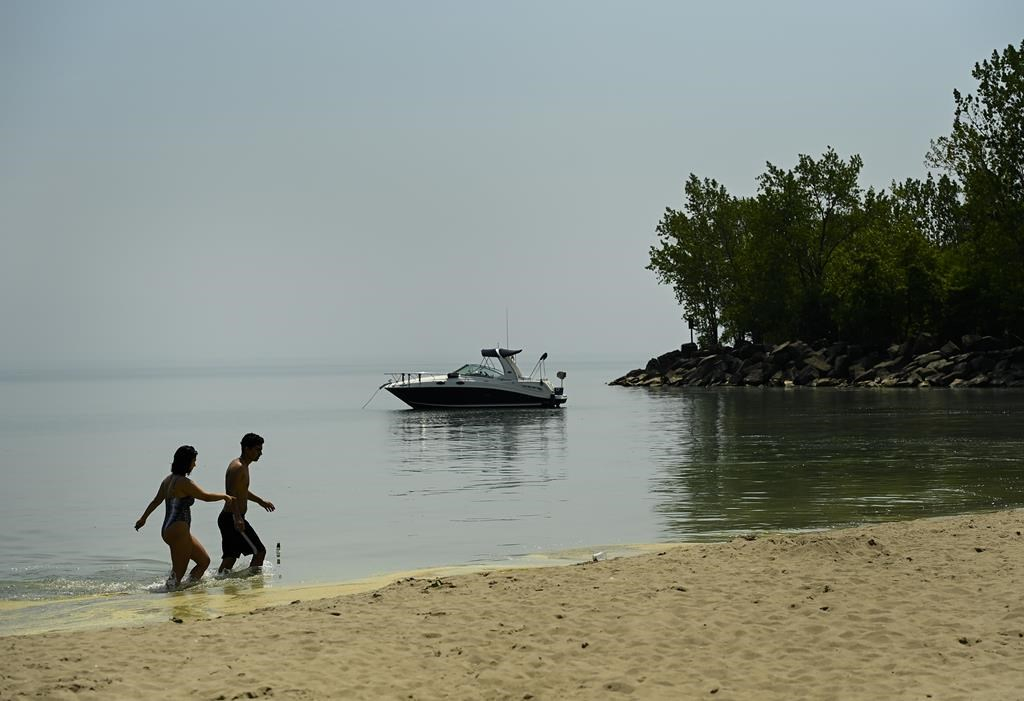 People walk in Lake Ontario on a warm sunny day at Woodbine Beach during the COVID-19 pandemic in Toronto on Tuesday, May 25, 2021. Photo by: The Canadian Press/Nathan Denette
Previous story
Next story

It will be a perfect summer for backyard barbecues and picnics in the park across much of Canada, according to predictions from one prominent national forecaster.

But the warm, dry conditions that socially starved Canadians crave as the spread of COVID-19 slows and the pace of vaccination accelerates will also allow forest fires to thrive, warned Chris Scott, chief meteorologist at The Weather Network.

"This summer, we think we'll have a few more of those nice days, so if that means getting to the beach or going to the park, camping, this is a good looking summer across most of the country," he said as the network released its summer forecast Tuesday.

"However, there is a downside for areas that are expected to see a hot and dry summer."

The ever-present risk of forest fires in British Columbia's Interior is higher than normal, he said, with higher temperatures and less precipitation than the average.

Across the Rockies, he said, Alberta is expected to see above normal temperatures, with less precipitation than average in the south and central parts of the province and higher-than-normal precipitation in the north.

Things could also get worrisome in the agricultural regions of Saskatchewan and Manitoba, he said.

"We're really concerned here about going into a drought," Scott said. "...June is really going to set the table for us and tell us what will happen for the rest of the summer."

June is typically the wettest month in this part of Canada, he noted, and if it rains in June then things may turn out OK.

"But our worry is that June goes drier than normal, and then we kind of get into this self-fulfilling prophecy where things just keep on being dried through the growing season," Scott said.

Northern Manitoba could see temperatures dipping slightly below normal, as could parts of northern Ontario.

Northern Ontario could also see higher-than-normal precipitation levels, in contrast to other parts of the province, where precipitation is expected to be below or around average.

"Southern Ontario looks pretty good overall," Scott said. "It's got a little bit of everything for everyone in that we will get our heat -- we'll get our really hot days -- but there'll be a few refreshing days thrown in as well."

Scott said the situation will likely be similar in Quebec.

"Montreal may be just a tad cooler than last year, but Montreal had a top five summer last year in terms of high temperatures," he said.

Newfoundland and Labrador can anticipate average levels of rain, Scott said, but the Maritime provinces are due to get more precipitation than normal.

"We don't think it's a washout of a summer at all. But we do think that when it rains, it will really pour thanks to a warm Atlantic Ocean and an above normal Atlantic hurricane season," he said, adding that it's too soon to say whether the region will be hit by any tropical storms.

In the North, precipitation levels will be near normal, Scott predicted.

Temperatures should be above normal in Yukon and the western Northwest Territories, while they're expected to be near normal farther east in the region, through Nunavut.

West of the Hudson Bay, Scott said, temperatures are expected to dip below the average.

"Overall, I think a lot of good weather here for people that like to get outdoors," he said.

"The real concern, though, is the lack of precipitation that is possible in some of the big agricultural regions of the country. And that is going to be a huge story to follow in the next few weeks to see how that leads into the core of summer."