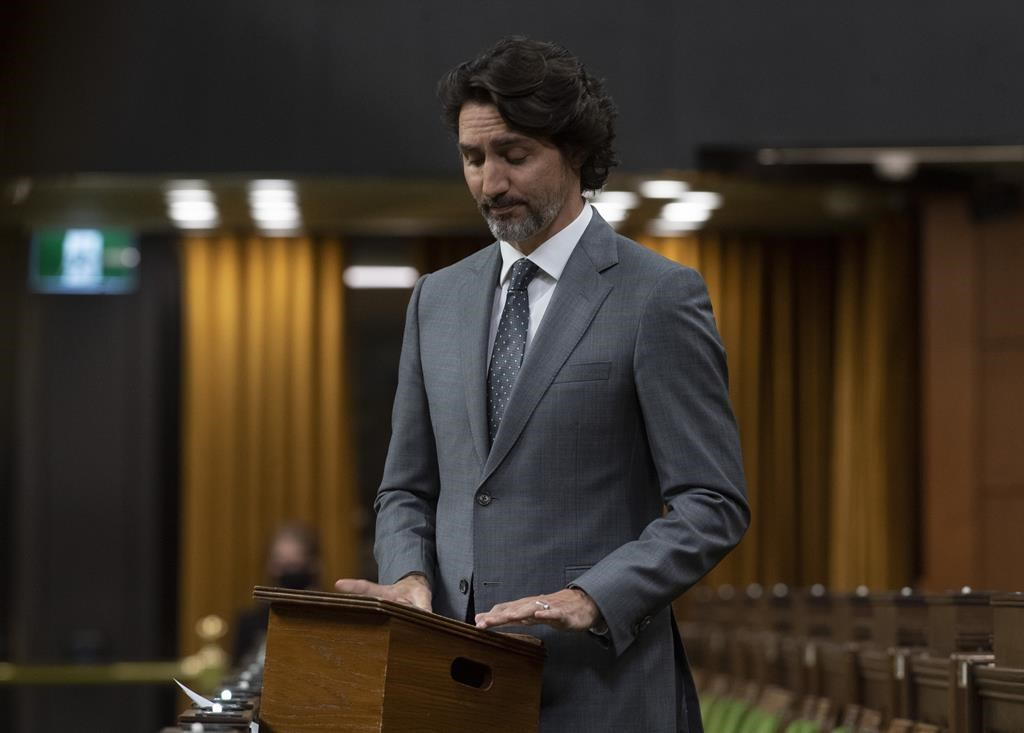 Prime Minister Justin Trudeau speaks during a debate about the discovery of remains of 215 children at the site of the Kamloops Indian Residential School, in the House of Commons. Photo by: Adrian Wyld
Previous story
Next story

OTTAWA — It is Canada's fault that 215 Indigenous children were buried in an unmarked, mass grave at a one-time residential school in Kamloops, B.C., Prime Minister Justin Trudeau said Tuesday.

Trudeau said Canadians can't close their eyes and pretend this didn't happen; they must acknowledge that the country failed in its duty to those children, their families and their communities.

And he said they must recognize that last week's grisly discovery of the children's remains is just part of a larger tragedy that saw thousands of Indigenous children torn from their families and sent to residential schools, where an untold number of them went "missing without a trace."

"Today, some of the children found in Kamloops, and who have yet to be found in other places across the country, would have been grandparents or great-grandparents. They would have been elders, knowledge keepers and community leaders," Trudeau told the House of Commons during a special "take-note debate" Tuesday night.

"They are not. And that is the fault of Canada."

Trudeau pledged the support of the federal government to help in preserving gravesites and uncovering potentially more unmarked burial grounds at other former residential schools. But he and his ministers stressed the need for Indigenous communities to decide for themselves how they want to proceed.

However, opposition leaders urged the government to do more.

Conservative Leader Erin O'Toole called on the government to give immediate priority to six calls to action identified by the Truth and Reconciliation Commission regarding the documentation and commemoration of children who died at residential schools and the protection of their gravesites.

"This tragic discovery is a stark reminder of our duty to heal the wounds from this horrific part of our history," he said.

Trudeau says #Canada is to blame for the residential school system which led to children being buried in unmarked graves. #cdnpoli

O'Toole also called on Parliament to swiftly pass a bill that would include recognition of aboriginal and treaty rights in the oath of citizenship.

However, he came under attack from other opposition MPs for his party's opposition to a bill that would implement the United Nations Declaration on the Rights of Indigenous people and for the previous Conservative government's refusal to fund efforts by Indigenous communities to uncover unmarked burial grounds.

O'Toole countered that now is not the time to play politics with the issue.

Trudeau called the residential school system "one piece of a larger colonial policy designed to erase language and culture and to assimilate Indigenous communities so that they no longer existed as distinct peoples." But he stopped short of calling it a genocide.

NDP Leader Jagmeet Singh, who requested the debate, was not so reticent.

The Truth and Reconciliation Commission concluded the schools reflected a policy of "cultural genocide." But Winnipeg NDP MP Leah Gazan, a member of Saskatchewan's Wood Mountain Lakota Nation, said there's no such thing.

"Genocide is genocide. If we want to reconcile in this country, then we need to own the truth," she said.

Bloc Quebecois Leader Yves-Francois Blanchet said he still trying to absorb the shock of learning that the remains of 215 children have been detected at the former Kamloops school and he urged the federal government to fund the technology needed to determine if there are similar unmarked gravesites at other schools.

Still, he said he doesn't like using the word genocide to describe what happened, adding that he'll leave it up to Indigenous people themselves to use the word they think is most appropriate.

And he criticized the government's yearlong delay in unveiling an action plan in response to the national inquiry into missing and murdered Indigenous women and girls. That national action plan is to be unveiled on Thursday.