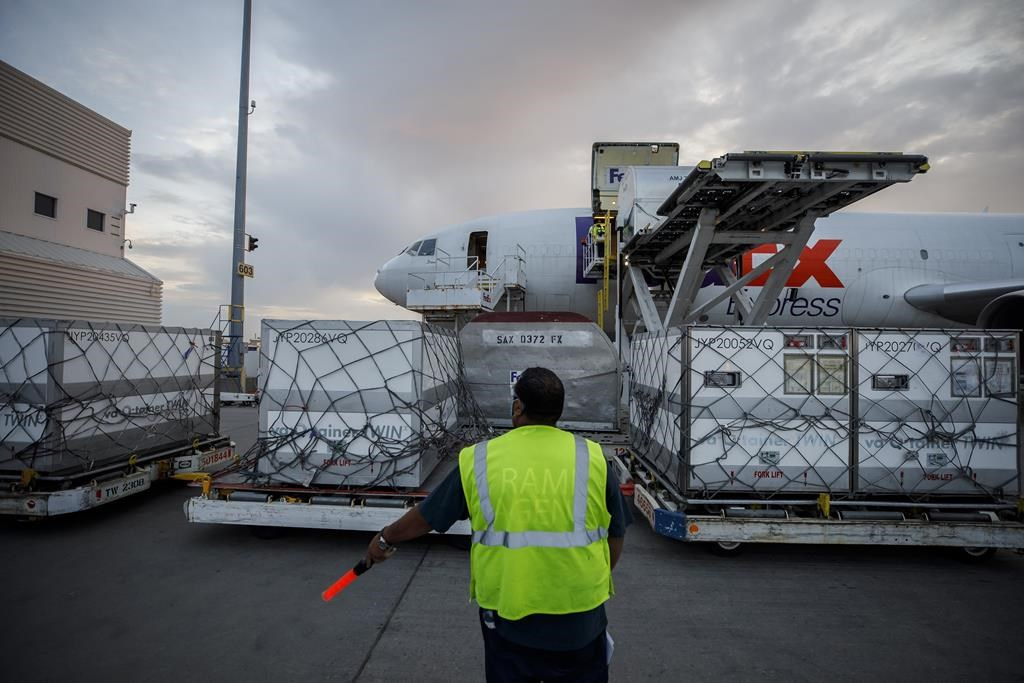 Workers unload a shipment of the Moderna COVID‑19 vaccine at the FedEx hub at Pearson International Airport in Toronto on Thursday, May 20, 2021. Photo by: The Canadian Press/Cole Burston
Previous story
Next story

OTTAWA — Procurement Minister Anita Anand says Canada is trying to negotiate a deal to start getting doses of Moderna's COVID-19 vaccine from the United States instead of Europe.

All 5.7 million doses delivered to Canada from Moderna so far have come from their production lines in Europe. but the company's shipments to Canada have been spotty and small since April 1.

As of Friday, Moderna has delivered or scheduled less than half of the 12.3 million doses initially promised for the second quarter.

Deliveries from the company's U.S.-based production facilities weren't to be harmed, but all those doses are contracted to stay in the U.S. for now.

Pfizer began shipping doses of the Pfizer-BioNTech vaccine from its U.S. production facilities in May and Anand is trying to convince both the U.S. government and Moderna to do the same for Moderna.

"Our government also continues to work with Moderna and the United States government to ensure that a more stable delivery schedule can be established and maintained, including by pressing for deliveries from the company's U.S. facilities," said Anand in a statement to The Canadian Press.

A spokeswoman for the company said in early May that Moderna's deliveries would continue to come from Europe. On Thursday she said there was no change at this time.

The U.S. has been one of the biggest COVID-19 vaccine producers in the world but used domestic orders to reserve the entire supply for Americans until that country was fully vaccinated.

It is slowly starting to share and donate doses to the rest of the world now.

President Joe Biden said Thursday the U.S. would share six million doses of vaccines with its neighbours and countries struggling to contain COVID-19, and another 19 million with the global vaccine sharing alliance known as COVAX.

They could be Pfizer, Moderna or Johnson & Johnson.

It is not clear how many of those doses would come to Canada, but the amount isn't likely to get anywhere close to filling Canada's Moderna needs, as the six million doses will be divided between Mexico, Canada, South Korea, West Bank and Gaza, Ukraine, Kosovo, Haiti, Georgia, Egypt, Jordan, Iraq, Yemen and front-line United Nations workers.

The U.S. will donate 60 million doses of AstraZeneca as well as soon as they are cleared by an inspection.

Pfizer has been Canada's "workhorse" vaccine to date, accounting for more than two-thirds of all deliveries to date. But Pfizer will have shipped 80 per cent of its Canadian deliveries by the end of July, leaving Moderna to pick up the slack towards getting all Canadians vaccinated by the end of September.

Anand, health officials and vaccine program officers have all repeatedly said theyve been pressing Moderna for a more stable June delivery schedule for weeks, but have thus far only been able to get a commitment for 500,000 doses this week and 1.5 million the week of June 14.

That leaves the company two weeks to ship 4.6 million to 6.6 million doses and hit its spring quarter commitments.

Moderna and Pfizer are both set to deliver 300 million doses each to the U.S. by the end of July. Centers for Disease Control data suggest by next week the U.S. will have distributed 167 million doses of Moderna and 198 million of Pfizer.

The U.S. would need more than 600 million doses to vaccinate every American and, like Canada, Pfizer and Moderna are going to make up most of those. But U.S. vaccinations have slowed to a crawl in the last month.

Forty per cent of Americans are now fully vaccinated, and another 10 per cent have their first dose, but after leading the world in vaccinations for most of the winter, the U.S. is now administering only about one-third the doses each day as it was in April.