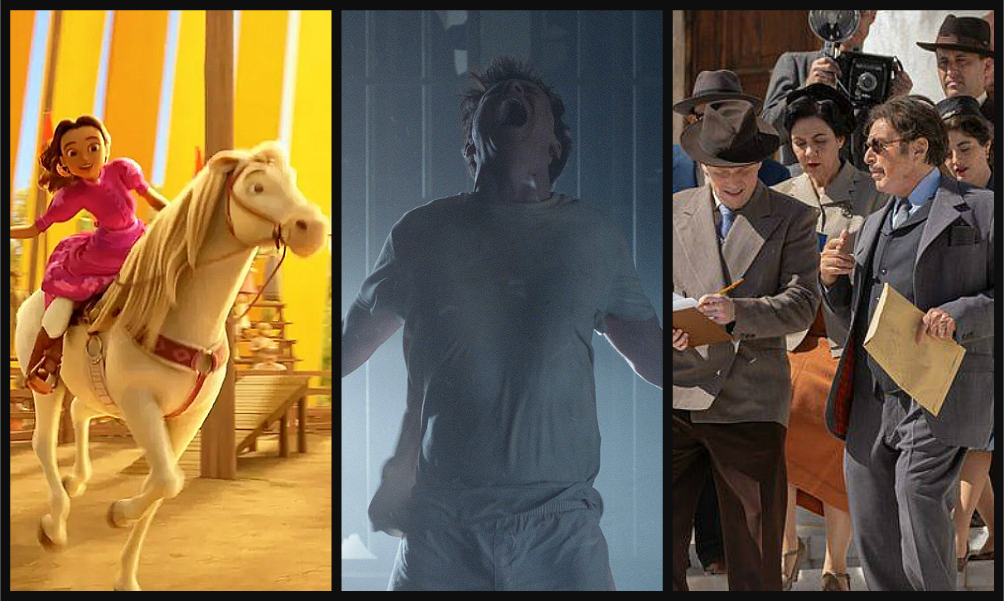 Also for beer drinkers who love the craft brews over the big brands.
Previous story
Next story

Unlike most of the last few weeks, there aren’t a lot of new films to review today. And you’ll have to search for some of them. Two are only in theatres so far and that means only in a few provinces right now. You’ll have to watch for future announcements from streaming sites.

Meanwhile, I think you must catch up to the Kate Winslet series called Mare of Easttown. It’s on Crave and premiered its seventh, and final, episode last Sunday. It was a stunning conclusion. Don’t let anyone tell you how it ended — a lot of online reviews spoil it — and you don’t want that. You invest a lot in the story and need the payoff of its very emotional dénouement.

Movie fans will also delight in Call My Agent, a series from France playing on Netflix. It’s about entertainment agents, the kind you hear thanked at the Oscars, is funny, refers to real foibles among movie people and has real stars of French cinema showing up.

The Conjuring — The Devil Made me Do It: 3

SPIRIT UNTAMED: Young girls love horses. We know that from countless books and movies, from the success of the Dreamworks film Spirit: Stallion of the Cimarron from almost 20 years ago and the followup series Spirit — Riding Free, which has been on Netflix for eight seasons now. Here’s another followup that’ll delight those girls again. It’s a condensation of the series. Lucky, whose champion show rider mother has died, is being raised by her father (Jake Gyllenhaal) with advice from her aunt (Julianne Moore) and a lot of memories stirred up by people in her town. Will she also be a horsewoman? Apparently so, as she shows she can befriend even the wildest stallion among the horses in a herd.

Cowboys round them up, maybe break some to ride or sell and send others away by train. But one (Walton Goggins) is cruel and violent with them and when he gets hold of Lucky’s favourite, who she calls Spirit, there has to be a rescue, a long chase and some dangerous jumping and just walking over craggy rocks, some in a thin wall. Lucky and her friends have to do “the impossible” if they’re to get through that. The film is computer animated with Dreamworks’ standard quality and vibrant voice acting. Director Elaine Bogan fashions it to be heartfelt and energizing for its natural audience. (Theatres now — where open — streaming to come.) 3½ out of 5

THE CONJURING — THE DEVIL MADE ME DO IT: This is the third in the series, or the seventh if you count various spinoff films, and it’s more of the same, or, depending on how you look at it, a new approach. The jump scares and creepy room entries are there as usual. There’s a particularly tingly sequence as Vera Farmiga, as demon investigator Lorraine Warren, goes down into the crawlspace beneath a house where the rats run free. So expect the chills you want, but it’s not a haunted house that’s the focus here. It’s an outside story, a real one that becomes attached; fictionally I suspect.

In a strong opening sequence, Lorraine and her partner in demonology, Ed (Patrick Wilson), attend a young boy’s exorcism. They sense that the demon jumped out of the boy into his sister’s boyfriend and later made him stab his landlord to death for playing a stereo too loud. At the inevitable murder trial, they urge he plead “demonic possession.” As Ed puts it: “The courts regularly accept the existence of God. It’s about time to accept the existence of the devil.” The film’s trailer is of the same mind. “The true case that proved the devil is real,” it says. The film, however, doesn’t show much from the trial and instead follows the Warrens as they track down what’s really going on. Demons don’t do things like this, they argue. They suspect a curse, visit a priest who warned of this years before, meet an occultist and see dark, flitting shapes down a hall or in the woods. The film is relatively light for the genre and easy to take. (In theatres, where they’re open.) 3 out of 5

AMERICAN TRAITOR — THE TRIAL OF AXIS SALLY: It’s always a treat to see Al Pacino in a new movie, and he rewards us twice here. He holds back on the ooh-ah shouting he likes to do, and he gives a superb speech in a climactic courtroom scene. Unfortunately that’s about it for any praise I can muster for the film around him. It’s informative, but I don’t know if it’s telling its story correctly. That being the tale of an American woman named Mildred Gillars, who broadcast German propaganda during the Second World War. G.I.s called her Axis Sally and apparently enjoyed her sexy orations even though she suggested the wives and girlfriends back home weren’t exactly waiting for them. She cast doubt on American democracy and lobbied to keep the U.S. out of the war. Naturally, she was charged and tried for treason after the war.

She’s played by a mid-level actor (Meadow Williams), who has little variation in her performance, but apparently enough money to invest in and executive produce this film (and cast her boyfriend in a secondary role). Pacino plays her lawyer and in that major speech has the unenviable task of arguing her broadcasts did no harm and did not amount to treason. The subtleties of that concept aren’t much dealt with here. It’s the factual information that’s most interesting. She broadcast from Berlin, but had many listeners in the U.S. How was that possible? She was a protege of Goebbels himself (Thomas Kretschmann), apparently a lover of his, though how that came about is not too clear, and she was apparently raped by him. Her motivations and what she thought politically are murky. Director Michael Polish, who also helped with the screenplay, doesn’t bring this story alive. Pacino does, briefly. (Rent or buy at Cineplex, Microsoft or GooglePlay.) 2½ out of 5

BREWMANCE: The craft beer movement has taken off in the last few years, and I would think that would indicate there’s considerable interest in this documentary. It’s American, tells where the movement started (San Francisco, it says, when a man named Fritz Maytag bought an abandoned brewery and started it up again), and shows with bubbly enthusiasm where that has led. There’s a Great American Beer Festival, for instance. There are 7,000 small breweries now operating in the U.S. The taste is spreading for something better, more hoppy perhaps, than what the giant brewing companies produce.

The film follows two California groups starting their own business. One is converting an empty shop in a mall. One is named after a river where the water runs pure. Others are heard from as far away as Boston. The movement reflects “American can-doism,” says one, who calls it “freedom with entrepreneurial endeavour.” It starts with somebody getting into making home brew and then turning it into a business. The film shows all the pitfalls they can encounter and then the feeling of triumph if they get it right. Festival winners are announced near the end and the guys we’ve been watching are on edge. There is drama as well as information here, documented by Christo Brock. (Canadian VOD platforms include Apple TV, iTunes, Google Play, Microsoft Store, Vimeo On Demand.) 3½ out of 5

Two big action flicks, and a welcome antidote with Mads Mikkelsen in Denmark