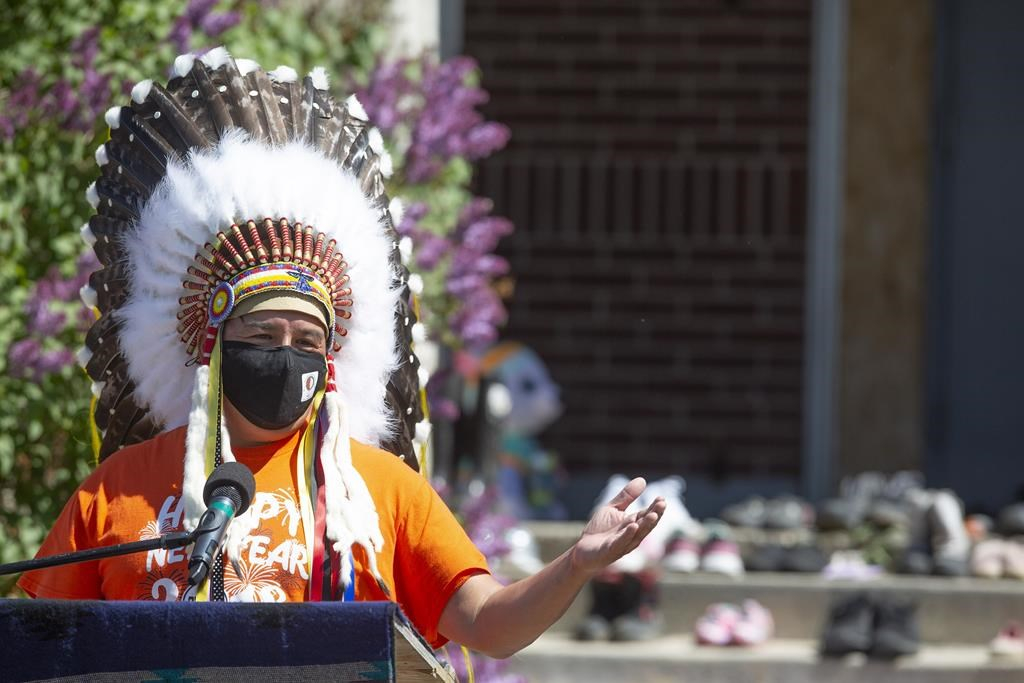 Indigenous leaders are expressing disappointment and frustration over comments by Pope Francis they say fell short of an apology for the Catholic Church's role in residential schools.

"It's just part of the healing journey," Bobby Cameron, chief of the Federation of Sovereign Indigenous Nations, said Monday in Saskatoon.

"Why can't the Pope contribute to that healing journey for survivors and their families?"

The Pope spoke Sunday in Rome and expressed his pain over the discovery of remains at a former residential school site in British Columbia.

The Tk’emlups te Secwepec First Nation has said ground-penetrating radar detected what are believed to be the remains of 215 Indigenous children at the Kamloops Indian Residential School site.

"We are all pained and saddened. We know that," said Cameron. "Now it’s time to apologize."

Cameron said the discovery in Kamloops has reopened wounds for many people in the 74 Saskatchewan First Nations he represents.

Cameron said a sincere apology from the Pope and a commitment to keep records of the church-run schools would help survivors and their families find healing.

The Saskatchewan chief said many of the people he represents don't like using the term residential schools because it doesn't grasp the horrific experience many had inside their walls.

"To many survivors and their families, they were institutions of torture, abuse and death."

#Indigenous leaders are frustrated and disappointed by the lack of apology from #PopeFrancis. #ResidentialSchools #cdnpoli

Some 150,000 First Nations, Metis and Inuit children were forced to go to the schools, which operated for more than 120 years in Canada. More than 60 per cent of residential schools were run by the Catholic Church.

Prime Minister Justin Trudeau has urged the church to take responsibility for its role in residential schools. He also asked that it release records on the schools.

Trudeau personally asked the Pope in 2017 to consider an apology for the institution's part in the government-sponsored, church-run schools for Indigenous children.

A delegation of First Nations leaders and residential school survivors met with former pope Benedict in 2009. He expressed his sorrow and “personal anguish" but never apologized.

The Truth and Reconciliation Commission's final report included a call for the Pope to issue an apology "for the Roman Catholic Church’s role in the spiritual, cultural, emotional, physical, and sexual abuse of First Nations, Inuit, and Métis children in Catholic-run residential schools." The commission urged that the apology be delivered in Canada within a year of the report, which was in 2015.

Arlen Dumas, grand chief of the Assembly of Manitoba Chiefs, said the role of top leaders in the Catholic Church is implicit in what happened when they refuse to acknowledge the schools.

"The reality is these things happened and happened under the auspice of the church," Dumas said.

He said the recent lack of an apology was particularly hurtful given Pope Francis' cultivated image based on humbleness and humility.

"It makes me more critical as to how the Bible says one thing, but the law of man dictates another direction," Dumas said in Winnipeg. "It’s very problematic."

Dumas, a member of the Mathias Colomb Cree Nation, was raised in Pukatawagan in remote northwestern Manitoba.

He said there were only whispers while he was growing up about what was happening at nearby residential schools, because there was fear about speaking out.

Now, he said, there's no denying what happened.

The Pope's continued refusal to recognize the harms that were done is an insult to Indigenous people, he said.

"A meaningful apology would help facilitate a path to healing."