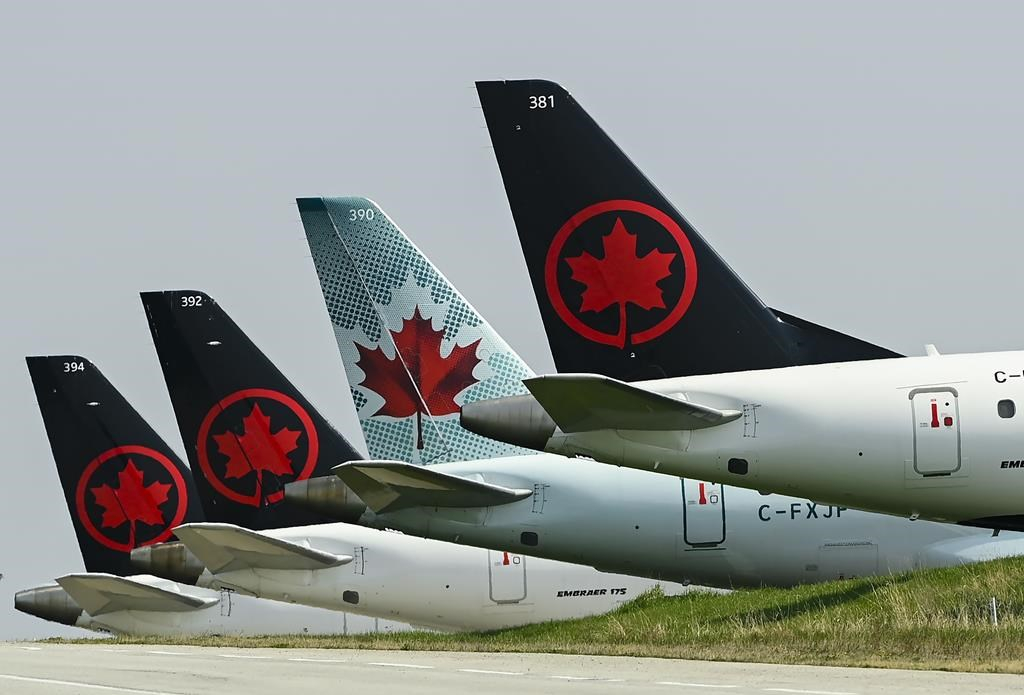 Grounded Air Canada planes sit on the tarmac at Pearson International Airport during the COVID-19 pandemic in Toronto on Wednesday, April 28, 2021. Photo by: The Canadian Press/Nathan Denette
Previous story
Next story

MONTREAL — Air Canada says its senior executives have chosen to return their 2020 bonuses in response to "public disappointment."

The airline company says in a news release the president and CEO, as well as executive vice-presidents of Air Canada, have volunteered to return their bonuses and share appreciation units.

Former president and CEO Calin Rovinescu, who retired in February 2021, says he will also donate his share to the Air Canada Foundation.

The statement does not include middle managers, whose bonuses made up more than $8 million of the $10-million bonus program, among those who are volunteering their bonuses.

Finance Minister Chrystia Freeland signalled her displeasure Wednesday over the multi-million dollar packages handed out to the airline's executives as the company negotiated a federal bailout, calling the bonuses "inappropriate."

The airline last Monday disclosed its annual proxy circular to shareholders that gave the bonuses to people the investor document called instrumental in the airline's survival over the past year as air travel plunged during the COVID-19 pandemic.

"Air Canada's leadership team is completely focused on Air Canada's recovery from the COVID-19 pandemic and preparations to welcome back furloughed colleagues and travelling customers as soon as possible," Sunday's statement says.

"The airline looks forward to continuing to work with all stakeholders, notably the Government of Canada on many fronts, including the safe re-start of our industry."

In April, the airline and government agreed to a $5.9 billion loan package that includes money to help refund passenger tickets, but also capped executive compensation at $1 million until 12 months after the loan is fully repaid.

The government also paid $500 million for a six per cent stake in the country's biggest airline, which Freeland said was done to ensure taxpayers could benefit once Air Canada's revenue rises when regular travel resumes.

In early 2020, senior executives and 3,200 management employees voluntarily agreed to total reductions of $11.5 million in their base salaries, subject to compensation through share appreciation units that might allow employees to recover some of the forgone salary if the share price rises higher in December 2022 than December 2020, the company says.

"While this situation could have been entirely avoided by Air Canada, we acknowledge this step in the right direction by the top five executives to repay 2020 bonuses and share appreciation units they received," they said in a joint statement Sunday night.