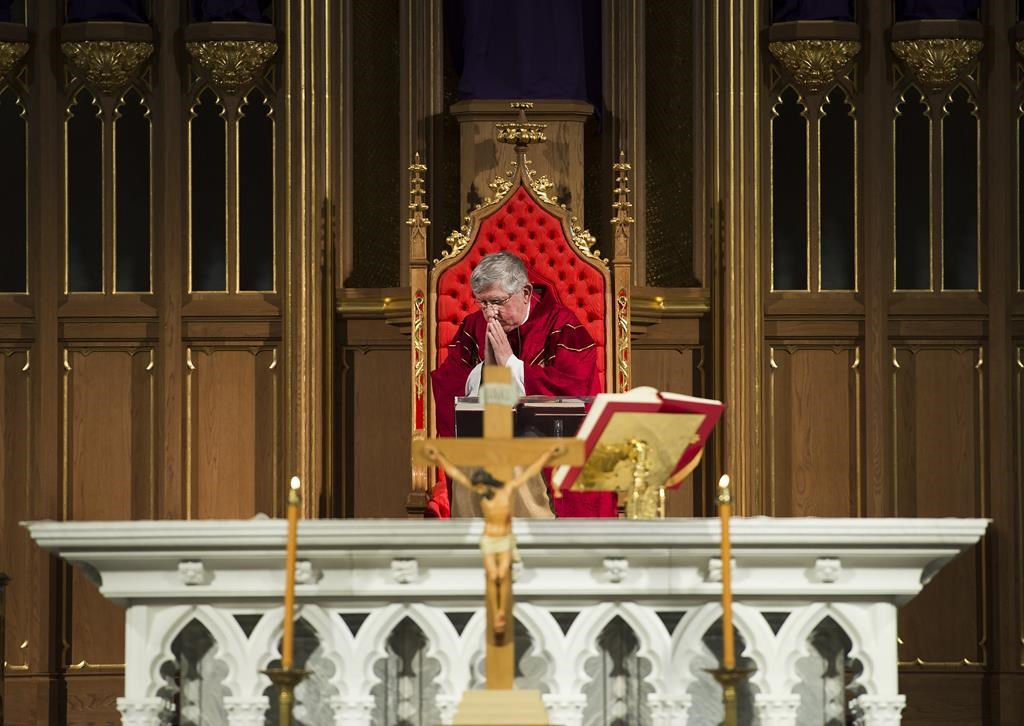 The archbishop of Toronto expressed "great sorrow" Sunday for the abuse that took place at Canada's residential schools, though he insisted the prime minister was “unfair” in his calls for the Catholic Church to take more responsibility.

Cardinal Thomas Collins also said it was "very important" when Pope Francis held a moment of silent prayer Sunday in honour of Canadian Indigenous children who died at residential schools and the families who mourn them, despite the pontiff not offering an apology for the Church's participation in the schools.

Collins expressed sadness for the rampant suffering endured at the institutions, both in an interview with The Canadian Press and in remarks delivered at a service in Toronto.

He said the Church as a whole has also owned up to its role in the system and chastised Prime Minister Justin Trudeau for seeking further action.

"I would think that Mr. Trudeau and his government ... should join with us and with the Indigenous people in our journey together," Collins said in a telephone interview. "We want to work together. These types of sharp comments, which are not based on real fact, are most unfortunate."

As the Pope addressed his congregation Sunday in the heart of Vatican City, Collins was inviting his own assembly from Toronto's St. Michael's Cathedral Basilica to bow their heads and honour those who died in Canadian residential schools.

The system targeted Indigenous children for decades, and some 150,000 First Nations, Metis and Inuit children were forcibly sent to the institutions where many suffered abuse and even death.

The issue was propelled back into the national spotlight 10 days ago when the Tk'emlups te Secwepemc First Nation in British Columbia announced that the remains of 215 Indigenous children are believed to be buried at an unmarked site at the former Kamloops Indian Residential School. Ground-penetrating radar confirmed the findings, the First Nation said.

Pope Francis said he is following news of the findings "with pain" after leading the Angelus prayer on Sunday. "I join the Canadian bishops and the entire Catholic Church in Canada in expressing my closeness to the Canadian people traumatized by the shocking news," he said.

He did not mention Trudeau's call for him to apologize for the Catholic Church's role in Canadian residential schools, which came at a Friday news conference. Saskatchewan's Federation of Sovereign Indigenous Nations is also demanding an apology from the Pope, saying it is the right thing to do.

"This was genocide, and it should be acknowledged as such by the perpetrators, the Church, the Government, and the RCMP," the organization representing 74 of the province's First Nations said in a release Sunday.

In response to Trudeau, Collins pointed out that Pope Benedict XVI apologized in 2009 to a delegation from Canada's Assembly of First Nations for the abuse experienced by children in residential schools. Benedict called the children's treatment "deplorable" in the same address.

Collins also noted the Oblates of Mary Immaculate, who ran the Kamloops residential school, apologized in 1991.

Collins called those remarks "unhelpful," noting that as far as he understands, the Oblates are releasing whatever documentation they have.

"But I totally agree that everything should be made known," he said, adding that any information that may be withheld should be released. "This whole residential school system was a terrible thing ... we have to repent of that and be deeply careful to ensure it never happens again."

Lawyer Mary Ellen Turpel-Lafond said she appreciates what seems to be a "heartfelt commitment" from the Cardinal to provide unmitigated access to records that would help family members identify residential school victims, especially those from the school in Kamloops.

But those in power have "taken positions contrary to the words expressed today," Turpel-Lafond, the director of the Indian Residential School History and Dialogue Centre at the University of British Columbia, said in an email Sunday.

She, too, called on "the highest authority in the Church" to apologize and direct that all records and archival material be released without exceptions.

"Leaving First Nations in limbo to engage with the dozens of church congregations, past and present, does not reflect a fulsome human rights approach," she said. "Canada needs to do better."

Both the church and our

Both the church and our government has questions to answer for. If the government at that point and time destroyed 15 tons of documents regarding the residential schools the big question is, Why?
And as for the church? Where do we start?

"...we have to repent of that and be deeply careful to ensure it never happens again."

Oh please. This from the body that still, well, let's say, is unhappy with LGBTQ2 people, and adamantly refuses to have women in their power structure. Talk about people unclear on the concept.

I am a lapsed Anglican, now don't participate in any structured religion. Most of them have strengths to go along with their weaknesses.

But the mystique, the magic, the thrall that the Catholic Church still holds over the world continues to drop my jaw. Many of their positions, some examples above, are offensive, and in direct violation of the *spirit* of the faith they proclaim. They are a tiny micro-state in the guts of Italy. Why do politicians continue to tremble at the very idea of holding them even remotely responsible--for current actions, let alone past ones.

More to the point, why only this religious organization?

The past is the past as far as the power and influence of this organization, this hierarchy, this bureaucracy, is concerned. Level the playing ground.