COVID shrank the economy — but climate change will be much worse 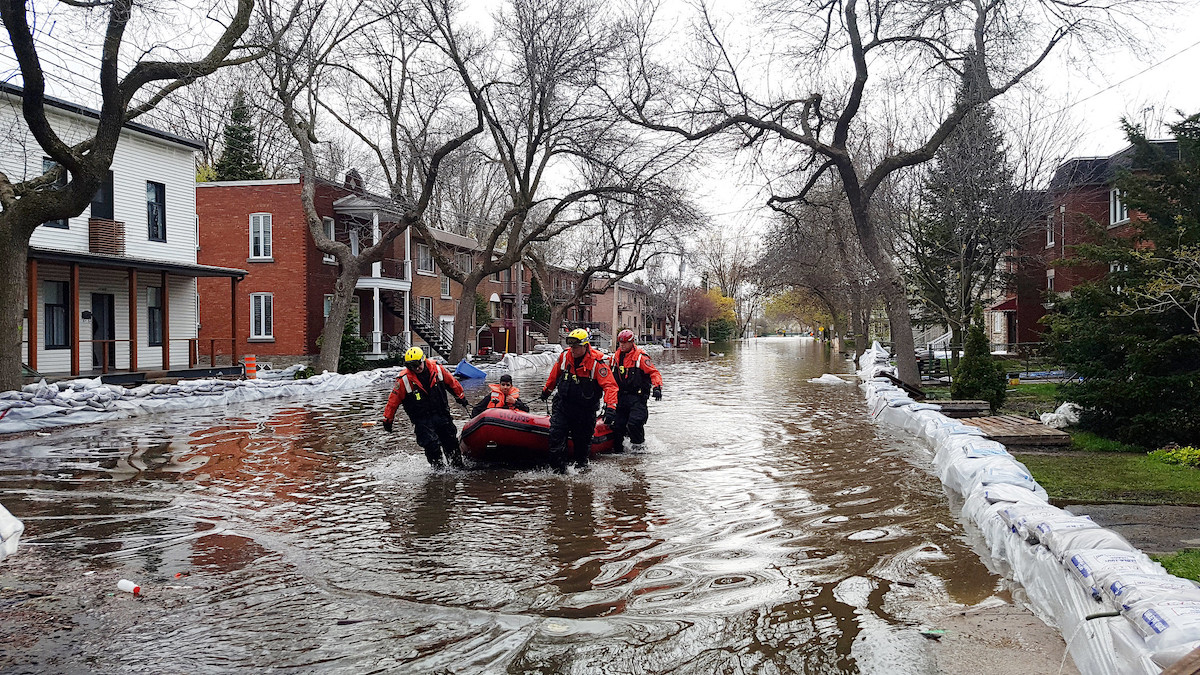 Flooding on Montreal's Rue Cousineau in May 2017. Direct impacts of climate breakdown, including extreme weather, could cost rich economies around the world twice as much as the COVID-19 pandemic already has. Photo by Cold, Indrid / Flickr (CC BY-SA 2.0)
Previous story
Next story

The economies of rich countries will shrink by twice as much as they did in the COVID-19 crisis if they fail to tackle rising greenhouse gas emissions, according to research.

The G7 countries — the world’s biggest industrialized economies — will lose 8.5 per cent of GDP a year, or nearly $5 trillion wiped off their economies, within 30 years if temperatures rise by 2.6 C, as they are likely to on the basis of government pledges and policies around the world, according to research from Oxfam and the Swiss Re Institute.

The economies of G7 nations contracted by about 4.2 per cent on average in the coronavirus pandemic, and the economic losses from the climate crisis by 2050 would be roughly on the scale of suffering a similar crisis twice every year, according to the research. The U.K.’s economy would lose 6.5 per cent a year by 2050 on current policies and projections, compared with 2.4 per cent if the goals of the Paris climate agreement are met.

Other nations will be hit much worse, including India, whose economy will shrink by a quarter owing to a 2.6 C temperature increase, while Australia will suffer a loss of 12.5 per cent of output, and South Korea will lose nearly a tenth of its economic potential.

The leaders of the G7 countries — the U.K., the U.S., Japan, Canada, France, Germany, Italy — and the EU will meet in Cornwall on Friday to discuss the global economy, COVID-19 vaccines, taxes on business and the climate crisis.

The modelling by the insurance firm Swiss Re took account of the forecast direct impacts of climate breakdown, including extreme weather such as droughts and floods, as well as the effects on agricultural productivity, health and heat stress.

Jerome Haegeli, group chief economist at Swiss Re, said: “Climate change is the long-term number one risk to the global economy, and staying where we are is not an option — we need more progress by the G7. That means not just obligations on cutting CO2 but helping developing countries too, that’s super important.”

He said vaccines for COVID-19 were also a key way to help developing countries, as their economies were hit hard by the pandemic and would need help to recover on a green path, rather than through boosting fossil fuels.

Economies around the world took a hit from the #COVID pandemic. But without #ClimateAction, rich countries will see their economies shrink twice as much — roughly on the scale of suffering a similar crisis twice every year, new research suggests.

The insurer found that policies and pledges by governments to reduce greenhouse gas emissions were still inadequate to meet the goals of the Paris Agreement. As well as hosting the G7 summit, the U.K. will host vital UN climate talks, called COP26, this November in Glasgow.

Ahead of COP26, the U.K. is calling on all countries to come forward with tougher pledges on carbon in order to meet the Paris targets of limiting global heating to well below 2 C, and preferably no more than 1.5 C, above pre-industrial levels. The lower limit is increasingly imperilled, as greenhouse gas emissions are forecast to jump sharply this year, by the second highest leap on record, owing to the rebound from the COVID-19 recession and increasing use of coal.

Danny Sriskandarajah, the chief executive of Oxfam GB, said: “The climate crisis is already devastating lives in poorer countries, but the world’s most developed economies are not immune. The U.K. government has a once-in-a-generation opportunity to lead the world towards a safer, more liveable planet for all of us.

“It should strain every diplomatic sinew to secure the strongest possible outcome at the G7 and COP26, and lead by example by turning promises into action and reversing self-defeating decisions like the proposed coal mine in Cumbria and cuts to overseas aid.”

The record of Boris Johnson’s government has come under close scrutiny in the run-up to the G7 and COP26 meetings. Leading figures in climate diplomacy have said the prime minister must “get a grip” of the UN talks in order to ensure their success, as rows over a proposed new coal mine, the decision to slash overseas aid from 0.7 per cent to 0.5 per cent of GDP, and issues such as new oil and gas licences for the North Sea, the scrapping of the green homes grant and of incentives for electric vehicles, and airport expansion, have all undermined the government’s green credentials.

Overseas aid has been the key sticking point for many, described as a diplomatic disaster when the success of COP26 hinges in part on the U.K. persuading other rich nations at the G7 summit to come up with far higher pledges of financial assistance to the developing world, to help poor countries cut their emissions and cope with the impacts of climate breakdown.

Dozens of Conservative rebels are planning to try to force the government to back down on the aid cuts in a key vote on Monday. The row, and the rise in COVID cases from new variants of the virus, threaten to overshadow what Johnson had hoped would be an uplifting meeting celebrating the success of vaccines, and laying the groundwork for a successful COP26 in Glasgow this November.